In 1992 Dan Brandenstein commanded the first flight of the space shuttle Endeavour. He spoke with EarthSky about Endeavour’s career and final launch May 16, 2011.

What are your thoughts on the final flight of space shuttle Endeavour?

I had the good fortune of flying the very first flight on Endeavour. And it was a great mission. I’m sorry to see Endeavour being retired after only 25 missions. The vehicles were designed for at least 100 missions, and Endeavour has performed admirably through its career.

What do you remember most about that first flight of Endeavour, back in May of 1992?

Flying Endeavour for the first flight was obviously quite a thrill. Endeavour was new, right out of manufacturing. I don’t know if many people know it, but it was named by schoolchildren in the United States. There actually were two different schools that provided the name. So it was quite an honor to fly it.

The most memorable part was the mission itself. We were sent up to capture and repair a satellite called INTELSAT. And the mission didn’t go quite as planned. Sometimes when you plan things on Earth in a one-gravity environment and try to do them in zero gravity, they don’t work quite the way they were planned.

We were unsuccessful on the first two tries, capturing the satellite. So ultimately, we changed the whole plan on the third try. So the effort of failing to capture it, and then re-planning it, and being successful is what I remember most.

Here’s how Endeavour plays into that. Even though it was its very first flight, Endeavour performed perfectly, with no problems. So we could put our full focus and attention on capturing that satellite and didn’t have to babysit and care for and repair minor problems with the Endeavour. 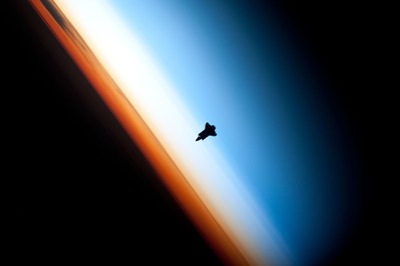 Are you disappointed to see the shuttle program coming to an end?

I’m disappointed in it because I think it’s premature. The space shuttle program has done an admirable job over the years, [with Endeavour being] its 134th flight. A shuttle launched the Hubble Space Telescope. A shuttle repaired the Hubble Space Telescope. Shuttles launched a number of deep space probes, and captured and repaired satellites. And for the last 10 years or so, shuttles have been helping to build the International Space Station (ISS), which is truly a phenomenal laboratory in zero gravity.

But in my mind, to retire the shuttle program before there’s a good, solid, tested vehicle to continue supporting ISS is a significant mistake. There are some things on the drawing board, coming down the road, that may or may not meet the requirements. But it just wasn’t a well-planned evolution, in my mind.

That first flight of the Endeavour was a tough one, wasn’t it? In that it needed three space walks to fix the INTELSAT VI (F-3) satellite. How did it go?

The Hughes satellite company was the customer. It was their satellite, and they wanted us to capture it. And the intent was to capture it and then put a new rocket motor on it, so it could go up to the altitude where communications satellites operate. It had had a failure on its initial launch from an expendable launch vehicle. And to save the satellite, they had to separate it in low Earth orbit – about 300 miles up instead of 23,000 miles, where it was supposed to be.

So it was a perfectly good satellite but not in the right place to be able to do its job.

We launched the Endeavour with a rocket motor in the payload bay. Our mission was to capture that satellite and bolt this new rocket motor on it so it could go on its way. There was a requirement that we touch only one structure on that satellite. And we had developed a device, a bar, that was supposed to capture it. And once again, in zero gravity, it didn’t work quite as designed on Earth.

We were unsuccessful on the first try. After we tried several times, the satellite was totally out of control. We were pretty disappointed, because we thought we had totally lost it. Fortunately, the ground team was able to get that satellite back under control about 45 minutes to a half-hour after we left it, which meant we had an opportunity the following day to try again.

We tried again, using that same piece of equipment. We probably did the process a little better. We learned some things the first day. But still, it didn’t operate as designed or intended.

So once again, we left the satellite totally out of control. It didn’t feel quite as bad the second time, because we knew the folks on the ground could get it back under control. But the crew felt that we had done the job as well as it could be done with that piece of equipment. We called the ground and recommended that we take a day off and come up with a new plan, because we didn’t think that the device we had intended to use was going to work. We had to come up with a new plan if we were going to be successful.

We took a day off and basically invented a three-person spacewalk. It’s the only time there’s ever been a spacewalk with three people at the same time on the shuttle – three spacewalkers anchored out on the payload bay. The shuttle flies extremely well, so I was able to fly the shuttle up to the satellite and basically placed the satellite right between the noses of the three people out on the payload bay. They just reached up with their hands and captured it. And from then on, when we were holding on to it, that device we had could be attached.

So we attached that and ultimately attached the rocket motor and deployed it and successfully got the satellite where it was supposed to be. 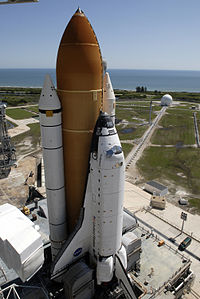 We might take the shuttle trips for granted now. But it seems as though, in those early days, NASA had to do some on-the-job training as they went along.

Any time you do something new in space, you can train for it and practice on Earth. But you’re always dealing with gravity. There’s a lot of on-the-job training, as you called it, or real-time adapting from what you learned in training to the way you have to do it in zero gravity. Sometimes it works real well. Sometimes you struggle a little bit, as we did on that flight.

Endeavour was built to replace the Challenger shuttle, which broke up mid-launch in 1986 and killed all seven crew members. What did it feel like to fly Endeavour in the wake of Challenger?

Where do you think NASA should focus its efforts for human spaceflight now?

I think it should be two-pronged. I think the International Space Station is a phenomenal laboratory, and there are going to be some great discoveries to come out of that, if it can be properly supplied and maintained. And I think we also should be going beyond low Earth orbit and exploring.

In my mind, the logical approach is going back to the moon. Yes, we’ve been there before, but there are a lot of things we haven’t done there. And the thing about going back to the moon is you can develop all of the processes and procedures and equipment that you want to go to Mars. The moon is only a three-day flight, so you can get there and back faster. If you have a problem, you’re not on that long a trip. You can work out the bugs and then move on to taking human space exploration to Mars, beyond that. And there’s some talk about going to asteroids in the interim. Ultimately, in my mind, we ought to have humans exploring Mars.

What’s the most important thing you want people today to know about the space shuttle Endeavour?

The Endeavour was an extremely well-designed vehicle. It performed magnificently during its short career. But more important than the vehicle itself is the American space team – the people behind it – the people that designed it and built it, maintain it, operate it.

I’ve had the good fortune for many years now, working in the space program. And we’ve had some spectacular flights, highly capable vehicles. But it always comes back down to the people who make it happen.

And this country has a great space team. It’s unfortunate, with the shuttle being retired, that a lot of those people are being laid off. It’s a real shame, because there’s some real talent there that is not going to be utilized now for a number of years.