Astronomers have been watching a faint comet – Comet Hergenrother – in hopes it would put on a good show. Now it appears the comet is breaking to pieces. 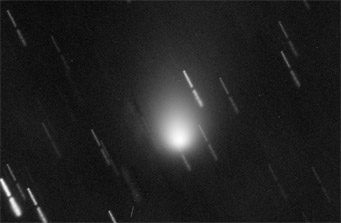 Comet 168P/Hergenrother on October 3, 2012, shortly after its closest point to the sun. This image is a 13-frame stack of red-light images acquired with the Faulkes South telescope in Australia via N. Howes / A. Tripp / E. Guido / G. Sostero

Astronomers say that Comet Hergenrother – a faint comet that nonetheless provided some excitement to those with large telescopes earlier this month – has now begun to split apart. This comet reached its perihelion, or closest point to our sun, on October 1, 2012. It was expected to be exceedingly faint and of interest only to the most avid and well equipped sky watchers. But, as a result of an outburst of gas and dust, the comet was briefly more than 500 times brighter than it expected. Amateur and professional astronomers alike have been following the icy-dirt ball over the past several weeks as it has been generating a series of impressive outbursts of cometary-dust material. As of about October 26, says Rachel Stevenson, a post-doctoral fellow working at NASA’s Jet Propulsion Laboratory in Pasadena, California:

Comet Hergenrother is splitting apart. Using the National Optical Astronomy Observatory’s Gemini North Telescope on top of Mauna Kea, Hawaii, we have resolved that the nucleus of the comet has separated into at least four distinct pieces resulting in a large increase in dust material in its coma.

Can you see several spots on this image that are brighter than the surrounding comet coma, but fainter than the central nucleus? They are a sign that this comet is breaking apart. This image of Comet 168P-Hergenrother is from the NOAO/Gemini telescope, November 2, 2012, 2011 at about 6 a.m. UTC. Image via NASA/JPL-Caltech/NOAO/Gemini

Carl Hergenrother first spotted this comet on images taken for the Catalina Sky Survey in 1998. It was given the designation P/1998 W2. Surprisingly, the comet returned in 2005 and got the temporary designation P/2005 N2. The P means it’s now considered a periodic comet, one that returns again and again to the inner solar system. Its orbit around the sun was then realized to be about its 6.9 years. Now, however, the fate of the comet is unknown. Once they break up, as Comet Hergenrother appears to have done, comets may never return again.

Comet Hergenrother can be seen, but, to accomplish it, you need a larger-sized telescope and a dark sky. If you have these, the comet can be found in between the constellations of Andromeda and Lacerta. NASA emphasized:

The orbit of comet 168P/Hergenrother comet is well understood. The comet, nor any of its fragments, are a threat to Earth.

Bottom line: Astronomers have been watching a faint comet – Comet Hergenrother – in hopes it would put on a good show for those using telescopes. The comet has been generating a series of impressive outbursts of cometary-dust material. Now it appears the comet has split apart, as comets sometimes do.