Star motions in the Small Magellanic Cloud – as revealed by the Gaia space observatory – confirm that this small satellite galaxy of our Milky Way collided in the past with its larger neighbor.

Just a few years ago, astronomer Gurtina Besla at University of Arizona used a computer to model what would have happened if, sometime in the past, the Large and Small Magellanic Clouds collided. The simulation above comes from her work. She and her team predicted at that time that a direct collision would cause the southeast region of the Small Magellanic Cloud – which astronomers call the Wing – to move toward the Large Magellanic Cloud. On the other hand, if the two galaxies simply passed near each other, the Wing stars should be moving in a perpendicular direction. This past week (October 25, 2018) – thanks to ESA’s Gaia space observatory – Michigan astronomers were able to confirm that what Besla and team predicted is in fact occurring. The Wing is moving away from the main body of the Small Magellanic. They said this observation provides:

… the first unambiguous evidence that the Small and Large Magellanic Clouds recently collided.

The Magellanic Clouds, visible from Earth’s Southern Hemisphere, are known to be small satellite galaxies of our Milky Way. They’re located not far from each other on the sky’s dome. Star motions in the smaller Cloud provide evidence for the collision, but we didn’t have data on these motions prior to Gaia, whose second data release was last April. Astronomers have been mining the Gaia data to learn all sorts of interesting insights about our galaxy and its neighborhood of space, and now here’s another one. Astronomer Sally Oey of University of Michigan, lead author of the study, said:

This is really one of our exciting results. You can actually see that the Wing is its own separate region that’s moving away from the rest of the Small Magellanic Cloud.

Oey and colleagues published their results in The Astrophysical Journal Letters. 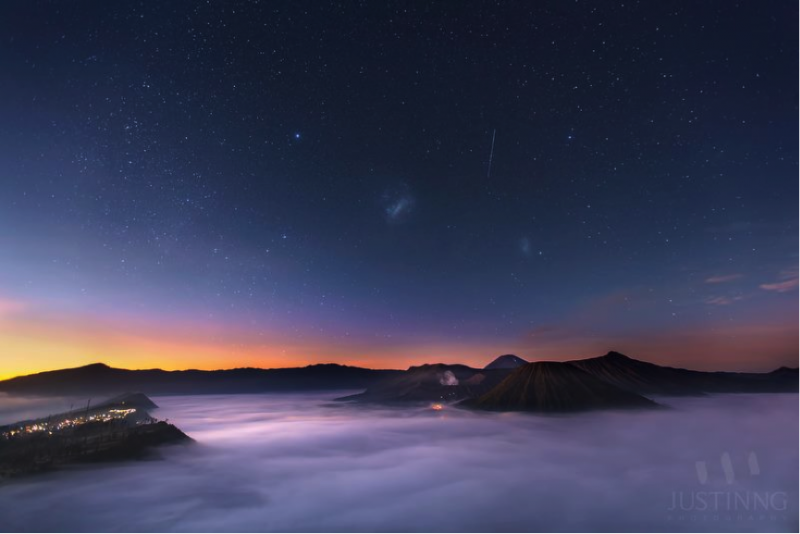 Astrophotographer Justin Ng caught the edgewise view into our Milky Way galaxy, the bright star Canopus and the Large and Small Magellanic Clouds at sunrise, in September 2013, over East Java’s Mount Bromo. Read more about this image.

A statement from University of Michigan described some of the processes these astronomers used to make their discovery:

Together with an international team, Oey and undergraduate researcher Johnny Dorigo Jones were examining the SMC [Small Magellanic Cloud] for ‘runaway’ stars, or stars that have been ejected from clusters within the SMC. To observe this galaxy they were using a recent data release from Gaia …

Gaia is designed to image stars again and again over a period of several years in order to plot their movement in real time. That way, scientists can measure how stars move across the sky. 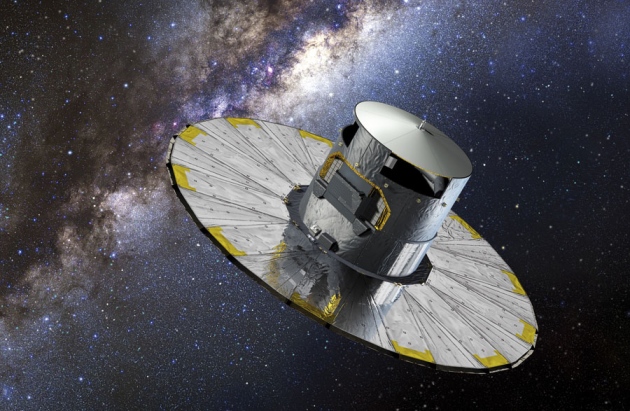 Artist’s concept of Gaia in space. Image via D. DUCROS/ESA.

We’ve been looking at very massive, hot young stars – the hottest, most luminous stars, which are fairly rare. The beauty of the Small Magellanic Cloud and the Large Magellanic Cloud is that they’re their own galaxies, so we’re looking at all of the massive stars in a single galaxy.

Examining stars in a single galaxy helps astronomers in two ways, these researchers said. First, it provides a statistically complete sample of stars in one parent galaxy. Second, this gives the astronomers a uniform distance to all the stars, which helps them measure their individual velocities. Dorigo Jones said:

It’s really interesting that Gaia obtained the proper motions of these stars. These motions contain everything we’re looking at. For example, if we observe someone walking in the cabin of an airplane in flight, the motion we see contains that of the plane, as well as the much slower motion of the person walking.

Oey and Dorigo Jones study runaway stars to determine how they have been ejected from these clusters. In one mechanism, called the binary supernova scenario, one star in a gravitationally bound, binary pair explodes as a supernova, ejecting the other star like a slingshot. This mechanism produces X-ray-emitting binary stars.

Another mechanism is that a gravitationally unstable cluster of stars eventually ejects one or two stars from the group. This is called the dynamical ejection scenario, which produces normal binary stars. The researchers found significant numbers of runaway stars among both X-ray binaries and normal binaries, indicating that both mechanisms are important in ejecting stars from clusters.

In looking at this data, the team also observed that all the stars within the Wing – that southeast part of the SMC – are moving in a similar direction and speed. This demonstrates the SMC and LMC likely had a collision a few hundred million years ago. 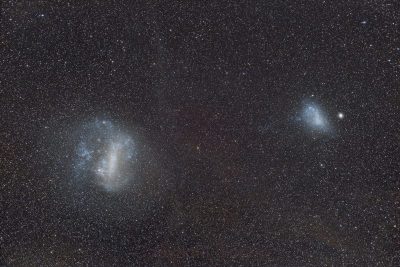 The Large and Small Magellanic Clouds. Image via Andrew Lockwood.

We want as much information about these stars as possible to better constrain these ejection mechanisms.

Everyone loves marveling at images of galaxies and nebulae that are incredibly far away. The Small Magellanic Cloud is so close to us, however, that we can see its beauty in the night sky with just our unaided eye. This fact, along with the data from Gaia, allows us to analyze the complex motions of stars within the Small Magellanic Cloud and even determine factors of its evolution.

Bottom line: The motions of stars in the Small Magellanic Cloud – as revealed by the Gaia space observatory – show that this small satellite galaxy of our Milky Way collided in the past with its larger neighbor, the Large Magellanic Cloud.