The flybys are part of a series of “lasts” for Cassini, whose mission to Saturn ends next year. Last chance for many years to see new up-close views of this fascinating, geologically active Saturn moon. 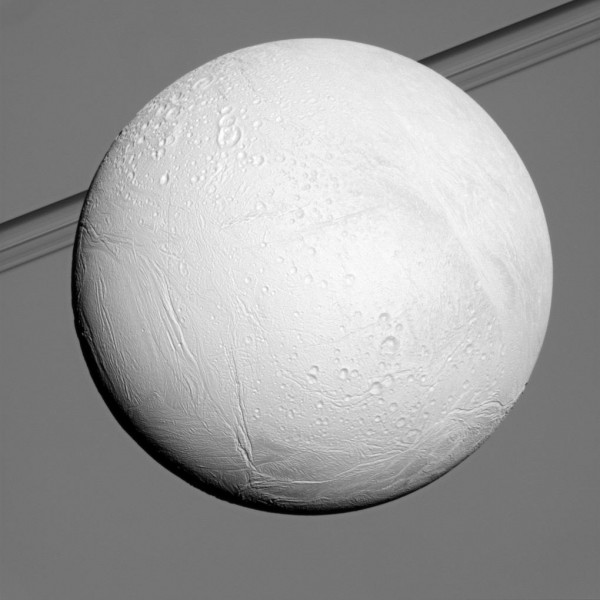 Here is the ocean-bearing icy moon Enceladus. Earlier in Cassini’s mission at Saturn, the northern part of this moon was in the shadow of winter. Image via NASA/JPL-Caltech

Enceladus – a moon of the planet Saturn – has active water and ice geysers on its surface, discovered by the Cassini spacecraft in 2006. Since that discovery, scientists have speculated about the source of the geysers, and, just last month, they announced that the geysers spew from a planet-wide, liquid ocean beneath the icy crust on this fascinating Saturn moon. On the heels of that announcement, NASA’s Cassini mission said this week it will begin a series of three close encounters with Enceladus, starting today (October 14, 2015).

Images are expected to begin arriving one to two days after the flyby, which will provide the first opportunity for a close-up look at the north polar region of Enceladus.

Wednesday’s flyby is considered a moderately close approach for Cassini, which will pass at an altitude of 1,142 miles (1,839 km) above the moon’s surface. Closest approach to Enceladus will occur at 6:41 a.m. EDT (10:41 UTC). The spacecraft’s final two approaches will take place in late October and mid-December.

Why, since Cassini has been orbiting Saturn since 2004, is it our first chance to see Enceladus’ north polar region up close? The answer has to do with the seasons on Enceladus. During Cassini’s early-mission encounters with the moon, the northern part of Enceladus was in winter darkness. Now that the summer sun is shining on the high northern latitudes of Enceladus, NASA said, scientists will be looking for signs of ancient geological activity similar to the geyser-spouting, tiger-stripe fractures in the moon’s south polar region.

Features observed during the flyby could help them understand whether the north also was geologically active at some time in the past. 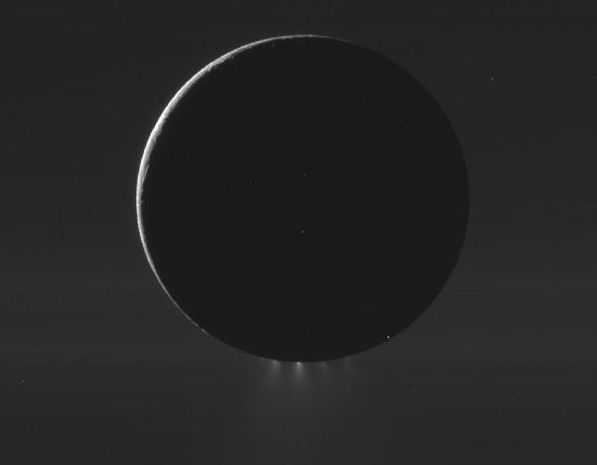 Cassini spacecraft image from 2010 of Saturn’s moon Enceladus. The moon is backlit, with its dark outline crowned by glowing jets from the south polar region. The jet emanate from the fissures known to scientists as “tiger stripes” on this moon. Image via NASA/JPL/SSI

This week’s flyby is a prelude to that planned for late October, when Cassini will come “dizzyingly close” to Enceladus, according to NASA. It’ll pass only 30 miles (49 kilometers) above the moon’s south polar region, making its deepest-ever dive through the moon’s plume of icy spray. NASA said:

Cassini scientists are hopeful data from that flyby will provide evidence of how much hydrothermal activity is occurring in the moon’s ocean, and how the amount of activity impacts the habitability of Enceladus’ ocean.

Cassini’s final close flyby on December 19 will examine how much heat is coming from the moon’s interior from an altitude of 3,106 miles (4,999 kilometers).

This series is part of a long series of “lasts” for Cassini. After the close moon flybys of Enceladus and other Saturn moons this year, the spacecraft will depart Saturn’s equatorial plane – where moon flybys occur most frequently – to begin a year-long setup of the mission’s daring final year.

We’ll continue observing Enceladus and its remarkable activity for the remainder of our precious time at Saturn. But these three encounters will be our last chance to see this fascinating world up close for many years to come.

Bottom line: This week (October 14, 2015), the Cassini spacecraft will begin a series of three close encounters with Saturn’s fascinating, geologically active moon Enceladus. The flybys are part of a series of “lasts” for Cassini, whose mission to Saturn ends next year.