India’s 2nd moon mission, Chandrayaan-2, successfully carried out its 3rd orbit-raising maneuver on Monday. It will soon enter trans-lunar orbit, with the goal of landing on the moon on September 7.

India’s second spacecraft to the moon – an unprecedented attempt to soft-land on the lunar south pole – is steadily breaking free of Earth’s gravity. Chandrayaan-2, consisting of an orbiter, lander and rover, launched on July 22, 2019, from India’s spaceport in Sriharikota, Andhra Pradesh.

Once launched, the spacecraft entered a highly elliptical orbit around Earth. Multiple orbit-raising maneuvers have been now steadily increasing its altitude until Earth’s gravitational force becomes weaker and the moon’s influence can begin to take over. The third such maneuver was carried out successfully today, according to ISRO:

Third earthbound orbit raising maneuver for Chandryaan-2 spacecraft has been performed successfully today (July 29, 2019) at 1512 hrs (IST) as planned, using the onboard propulsion system for a firing duration of 989 seconds. The orbit achieved is 276 x 71792 km. All spacecraft parameters are normal. The fourth orbit raising maneuver is scheduled on August 2, 2019, between 1400 – 1500 hrs (IST).

If everything goes well, Chandrayaan-2 will soon enter trans-lunar orbit and land on the moon on September 7, 2019.

The instruments onboard the spacecraft will study the moon’s topography and chemical composition, and map the abundance of lunar water, especially at the polar regions. Chandrayaan-2’s predecessor, Chandrayaan-1, launched in 2008, confirmed the presence of lunar water.

The moon is positioned in such a way that some parts of the polar regions are permanently shadowed. Chandrayaan-1 also provided evidence of ice being present in craters of the south pole. Places like these allow water to freeze and to remain frozen. Building upon its precursor’s findings, Chandrayaan-2 will land on a high plain between two such craters in the southern hemisphere – Manzinus C and Simpelius N. While the evidence of lunar water is not new knowledge, the south pole is still unfamiliar terrain.

If Chandrayaan-2 is successful, India will be the fourth country after the U.S., China, and the Soviet Union to complete a soft landing on the moon. A recent attempt by an Israeli group was unsuccessful. 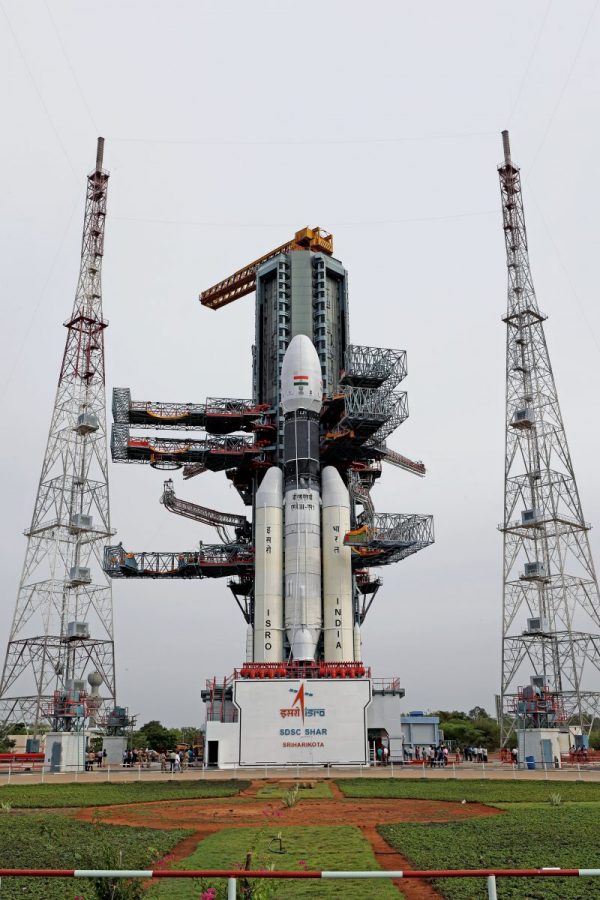 Chandrayaan-2 sits atop the GSLV MkIII-M1 rocket at the Satish Dhawan Space Centre in India. Image via ISRO.

Soon, the spacecraft will enter a Lunar Bound Phase where its propulsion systems will be fired to slow it down and insert it into an orbit around the moon. On day 43, the lander, called Vikram, will separate from the orbiter from a distance of 62 miles (100 km).

The lander will then attempt to soft-land – a first of its kind for India – using complex braking mechanisms. A few meters above the ground, all thrusters will shut off to allow a free fall. The quiet landing will ensure that the moon’s surface remains undisturbed and its dust unmoved, dust which could otherwise spurt all around the spacecraft due to the thrusters’ force and spoil its circuitry systems.

Once firmly on the ground, the lander will deploy its rover, called Pragyaan, which will perform on-site chemical analysis for one lunar day (14 earth days). Onboard Pragyaan, a suite of spectroscopic instruments will fire lasers at different locations on the lunar surface to analyze its chemical composition. The rover will primarily hunt for major rock-forming minerals such as sodium, magnesium, and iron. The orbiter carries the highest number of instruments and is also responsible for a large chunk of information. Studies such as 3-D mapping of the lunar surface, solar radiation monitoring and analyzing the moon’s ionosphere are crucial to understanding the moon’s evolution.

All in all, Chandrayaan-2 will not only help us understand our natural satellite better, but will also inform future manned missions to the moon, such as NASA’s Artemis in 2024.

Bottom line: India’s second spacecraft to the moon – Chandrayaan-2 – is steadily breaking free of Earth’s gravity. If everything goes well, it will soon enter trans-lunar orbit and land on the moon on September 7, 2019.