A black hole may flare when its corona – a mysterious source of highly energetic particles – launches away from the hole at close to 20 percent of light speed. 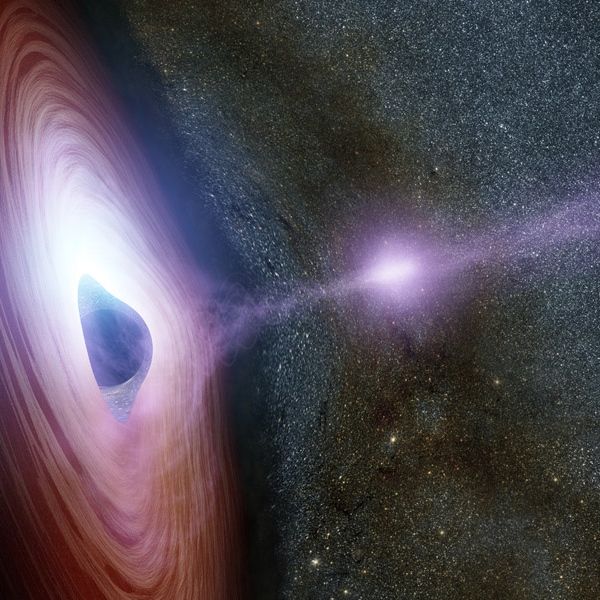 View larger. | Artist’s concept of a supermassive black hole, surrounded by a swirling disk of material falling onto it. The purplish ball of light depicted launching from the black hole is its corona. The launch of the corona may generate an X-ray flare. Image via NASA/JPL-Caltech.

When we speak of flares from black hole, people always say:

I thought nothing could escape a black hole …

And that’s true. Black holes, by definition, have such powerful gravity that not even light can escape them. The flares come from outside a black hole’s event horizon, its point of no return. This week (October 27, 2015), NASA said that new observations from two missions – Swift and the Nuclear Spectroscopic Telescope Array, or NuSTAR – recently caught a supermassive black hole in the midst of a giant X-ray flare. These new observations are helping astronomers understand how supermassive black holes emit their colossal flares.

If you haven’t been following supermassive black hole research, the word corona in this context might be new. Supermassive black holes typically have disks of hot, glowing material surrounding them. As the gravity of the hole pulls on the swirling gas, it shines with different types of light, and it’s this light that astronomers look for when observing black holes.

In recent years, though, astronomers have come to realize there’s another source of radiation near a black hole disk. That is the mysterious corona. Coronas are made highly energetic particles; they generate X-ray light. But details about coronas – how they form, what they look like, even where they are exactly it the region surrounding the hole – are unclear.

However, according to this new research, the coronas do seem to be the culprit in causing supermassive black hole flares.

The research shows that the flares result not just from the coronas themselves, but the high-speed launch of the coronas away from the hole. Dan Wilkins of Saint Mary’s University in Halifax, Canada is lead author of the new paper, which appears in the Monthly Notices of the Royal Astronomical Society. Wilkins said in an October 27 statement:

This is the first time we have been able to link the launching of the corona to a flare.

This will help us understand how supermassive black holes power some of the brightest objects in the universe. 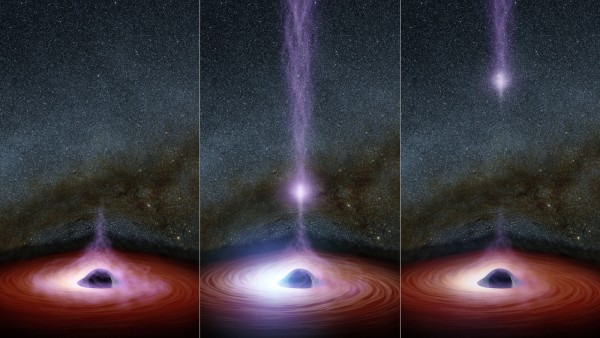 Artist’s concept showing how a shifting corona can create a flare of X-rays around a black hole. The corona gathers inward (left), becoming brighter, before shooting away from the black hole (middle and right). Astronomers don’t know why the coronas shift, but they have learned that this process leads to an X-ray flare. Image via NASA/JPL-Caltech.

Astronomers think coronas have one of two likely configurations.

The lamppost model says they are compact sources of light, similar to light bulbs, that sit above and below the black hole, along its rotation axis.

The sandwich model proposes that the coronas are spread out more diffusely, either as a larger cloud around the black hole, or as a sort of sandwich that envelops the surrounding disk of material like slices of bread.

It’s possible that coronas switch between both the lamppost and sandwich configurations. However, the statement explained:

Here’s the story of the new research. The observations began in 2007, when the Swift satellite caught a large flare coming from a supermassive black hole called Markarian 335, 324 million light-years away in the direction of our constellation Pegasus. For awhile, Mrk 335 was the brightest X-ray sources in the sky. Luigi Gallo, the principal investigator for the project at Saint Mary’s University, said:

Something very strange happened in 2007, when Mrk 335 faded by a factor of 30. What we have found is that it continues to erupt in flares but has not reached the brightness levels and stability seen before.

Then seven years later, in September 2014, Swift again caught Mrk 335 in a huge flare. Once Gallo found out, he sent a request to the NuSTAR team to quickly follow up, and, eight days later, NuSTAR, too, witnessed the final half of the flare event.

After careful scrutiny of the data from both spacecraft, the astronomers said, they realized they were seeing the ejection, and eventual collapse, of the black hole’s corona. Dan Wilkins said:

The corona gathered inward at first and then launched upwards like a jet. We still don’t know how jets in black holes form, but it’s an exciting possibility that this black hole’s corona was beginning to form the base of a jet before it collapsed.

So black hole flares – and coronas – remains mysterious. But astronomers are now getting clues. 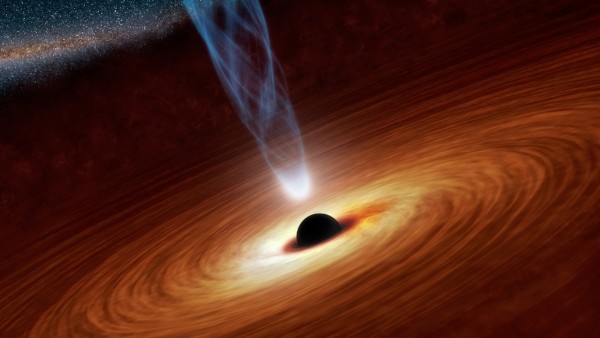 Artist’s concept of a supermassive black hole. The regions around such objects shine brightly in X-rays. Some of this radiation comes from a surrounding disk, and most comes from the corona, pictured here in this artist’s concept as the white light at the base of a jet. This is one possible configuration for a corona – its actual shape is unknown. Image via NASA/JPL-Caltech.

Bottom line: Supermassive black hole coronas are mysterious sources of highly energetic particles in the holes’ vicinity. A black hole may flare when its corona launches away from the hole at speeds close to 20 percent the speed of light.