A huge sunspot has rotated into view. It has already spawned an X-class solar flare and NOAA is projecting more for November 4, 2011.

NOAA forecasters have upgraded the chance of X-class solar flares today (November 4, 2011) to 20%. The source would be one of the largest sunspots in years that has just rotated into view, over the sun’s northeastern visible edge. Designated AR1339, it is some 25,000 miles (40,000 kilometers) wide and at least twice that in length. That means you could line six planet Earths up side by side in front of AR1339’s long dimension. 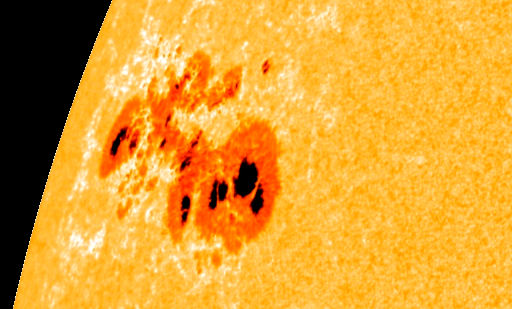 Sunspot AR1339 already spawned an X1.9-class solar flare on November 3, 2011 at around 20:27 UTC (3:27 p.m. CDT). An X-class flare is the most powerful of the solar flare categories defined by NASA. The coronal mass ejection (CME) from yesterday’s X-class flare is not headed toward Earth, but it will strike Mercury and Venus.

NASA Goddard’s Space Weather Lab is tracking the CME from yesterday’s X-class solar flare. The cloud of plasma ejected off the sun at 1,100 kilometers/second (680 miles/second). It should hit Mercury midday today according to U.S. clocks. NASA’s MESSENGER probe around Mercury will be monitoring the impact. The CME will hit Venus sometime tomorrow.

This CME will not strike Earth, as you can see by looking carefully at the “prediction track” below:

Coronal mass ejection explodes from sun on November 3, 2011. It is projected to strike Venus and Mercury but not Earth, as this illustration shows.

Sunspots appear visibly dark in contrast to the brilliant solar surface surrounding them, but if you could remove them from the sun’s surface they would appear to shine brightly. They are caused by intense magnetic activity on the sun, and, like magnets, sunspots also have a north and south magnetic pole. Sunspots are highly variable. They come and go, expand and contract, appear on the sun’s surface and then disappear. And of course they are subject to the famous, approximate 11-year cycle of solar activity. We’re near the peak of that cycle at this time, which is why we’ve posted many article recently about sunspots and X-flares!

Bottom line: One of the largest sunspots in years rotated into view over the past few days, over the sun’s northeastern visible edge. Designated AR1339, it is some 25,000 miles (40,000 kilometers) wide and at least twice that in length. It spawned an an X1.9-class solar flare on November 3, 2011. NOAA forecasters have upgraded the chance of X-class solar flares today (November 4, 2011) to 20%.