Project Nightflight in Austria has a new web platform, presenting not just astrophotos, but also the sounds they heard while capturing them. It’s wonderful. 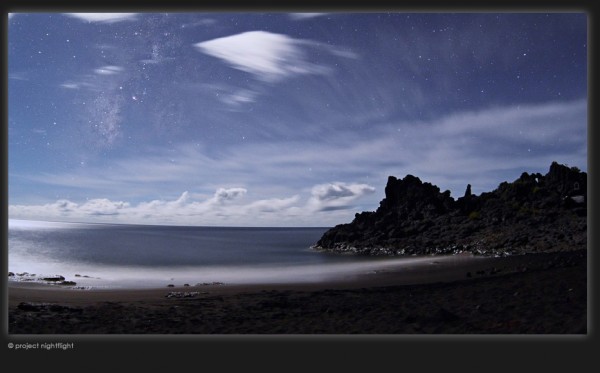 The Project Nightflight team captured this photo at La Palma Island in the Canary Islands of Spain. Click here to visit Sounds of the Night, where you can see this photo and hear the sound of the waves.

Project Nightflight – a team of astrophotographers, headed by Karoline Mrazek and Erwin Matys in Vienna, Austria – has just released a beautiful new project, which they are calling Sounds of the Night. It consists of multimedia astrophotos – audio images, as they’re calling them – not just a beautiful night sky, but also the sounds you’d have heard if you’d been there with them taking the photos. Click here to visit Sounds of the Night, and you’ll find a series of night images, accompanied by the sound of ocean waves, crickets chirping, nocturnal birds and more.

Project Nightflight – whose amazing image of Venus was featured as EarthSky’s Today’s Image for December 5, 2014 – said about their new project:

If you watch the Project Nightflight audio pictures, you will most likely notice a much stronger effect than traditional astrophotos cause. This happens because the audio pictures reach two channels of human perception. The visual channel is backed up by sounds, which easily triggers memories from first-hand experiences. Imagination then completes the illusion and the picture becomes the current reality. You suddenly feel like being outdoors under the night sky.

The audio pictures were imaged and recorded during 2013 and 2014 on the Canary island La Palma and along the Grossmugl Star Walk in Austria. The astrophotographers used standard photographic equipment for imaging and a voice recorder with a stereo microphone for capturing the audios. High-end digital processing techniques were implemented to give both the images and the sounds the final brilliance.

Project Nightflight says it developed the new medium of the audio images as a tool to present the beauty of the night sky to the broader public. They say it’s their endeavor:

… to internationally promote the conservation of the starry sky as an environmental resource. The activities of Project Nightflight aim at inspiring public support for light pollution prevention by lifting people’s gazes up toward the night sky.

If you’ve ever spent a night under the stars, you know how much a part of the experience the sounds of the night can be. Bravo, and thank you, Project Nightflight!

Bottom line: Project Nightflight in Austria has a new web platform, presenting not just astrophotos, but also the sounds they heard while capturing them. Visit Sounds of the Night.