Uranus – the sideways planet – has a weird spin and the strangest seasons of any of our solar system’s planets. Astronomers called this week’s storms “surprising.” 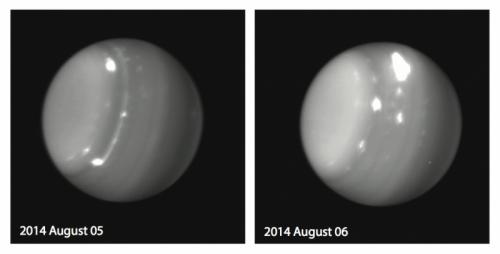 Massive storms on the 7th planet, Uranus, captured August 5 and 6, 2014 at Keck Observatory. This image was made using a near-infrared camera with adaptive optics on the 10-meter Keck II telescope. Image via Imke de Pater, Larry Sromovosky, Pat Fry, and Heidi Hammel.

Astronomers in Hawaii said they were “surprised” by the many bright, swirling storms they observed this week on the planet Uranus, including at least one “monstrous feature.” It just goes to show we haven’t had the equipment to observe Uranus as carefully as we now can, throughout its 84-year orbit. We got our first good look at the planet during the Voyager encounter in 1986. After only a few dim clouds were seen in its atmosphere, astronomers continued to describe Uranus as “featureless” as they had when telescopes were their only option for observing it. But telescope technology has gotten much, much better over recent decades. When Uranus approached its equinox in 2007 – that is, when the sun stood high above its equator – astronomers on Earth could see that large storms did develop on Uranus, and then quickly faded.

And now the storms are back. Heidi Hammel, a member of an observing team working this week at W. M. Keck Observatory on the island of Hawaii, said:

Even after years of observing, a new picture of Uranus from Keck Observatory can stop me in my tracks and make me say Wow!

Remember the weird rotation angle of Uranus? Its unusual spin powerfully affects its seasons and weather. Most of the planets orbit nearly upright with respect to the plane of their orbits (and Earth’s orbit) around the sun. But Uranus is “the sideways planet,” with its axis of rotation tilted by nearly 98 degrees with respect to the plane of the solar system. For one quarter of its orbit (21 years), the north pole of Uranus points continually toward the sun, and the south pole has perpetual night. For the next quarter orbit, the equatorial regions of the planet receive the most direct sunlight, as the planet rolls along beneath the sun, spinning about every 17 hours. During that period, the poles are in twilight. Then the south pole is in continual sunlight, with the north pole dark, for the next quarter orbit (21 years). Then the equatorial regions experience the 17-hour day/night cycle again. And then the cycle starts over. 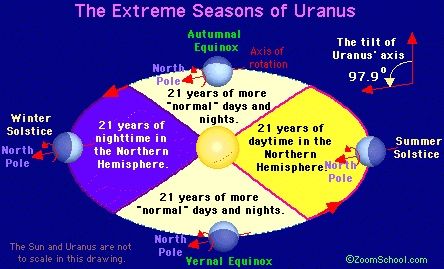 You might see that when Uranus is near an equinox – as it is now – its day/night cycle is likely to affect its weather.

Then you might also consider the view from Earth. A press release from the W.M. Keck Observatory said:

Since the 2007 equinox, Uranus’s northern pole has been coming into view, and the south pole is no longer visible. The bright feature de Pater refers to was known as the “Berg”, because this feature was visible just below the polar haze, and resembled an iceberg peeled off an ice-shelf. The Berg oscillated in latitude between southern latitudes of 32 and 36 degrees since 2000, and perhaps dated back to the Voyager era (1986). In 2004 it became much brighter; in 2005 it started to migrate towards the equator and became a very powerful storm system. In 2009, when it came to within a few degrees of the equator, it dissipated.

The present storm is even brighter than the Berg. Its morphology is rather similar, and the team expects it may also be tied to a vortex in the deeper atmosphere. From near-infrared images taken at 2.2 micron, the team already determined that the storm must reach high altitudes; they will conduct calculations to determine the precise altitude, but based upon its brightness at those wavelengths the team expects it to reach altitudes near the tropopause. 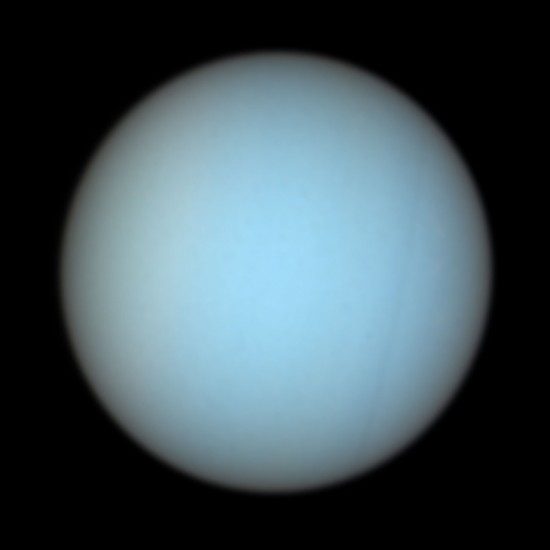 Uranus in natural color, via the Hubble Space Telescope. Read more about this image.

Read more about the Uranus storms from the W. M. Keck Observatory