Alan Stern on the moons of Pluto

Fans of Pluto celebrated the discovery of its fifth moon in July of 2012. Astronomer Alan Stern was on the discovery team that found Pluto’s new moon.

Fans of Pluto celebrated the discovery of its fifth moon in July of 2012. Astronomer Alan Stern was on the discovery team that found Pluto’s new moon using the Hubble Space Telescope.

Informally called P5 by astronomers, this tiny moon of Pluto is less than 15 miles (25 kilometers) across. It’s potato-shaped, and it moves around Pluto in a 58,000-mile-diameter circular orbit. I rang up planetary scientist Alan Stern of the Southwest Research Institute in Boulder, Colorado. He heads the New Horizons space mission now en route to Pluto, and he is on the Hubble Pluto Team that made the discovery of the new moon. He told me this new moon of Pluto was hard to find.

The Hubble Pluto Team is using the Hubble Space Telescope to scour the region of space around Pluto. Their aim is to uncover potential hazards to the New Horizons spacecraft, which will be moving past the dwarf planet at a speed of 30,000 miles per hour at its 2015 flyby of the planet. At this speed, New Horizons could be destroyed in a collision with even a BB-shot-size piece of orbital debris.

Despite the fact that Pluto is clearly central to its own system of orbiting bodies, the International Astronomical Union demoted Pluto to dwarf plant status in 2006. Stern – whose New Horizons space mission will be the first to sweep near Pluto – explained what it means to scientists to find a fifth moon. 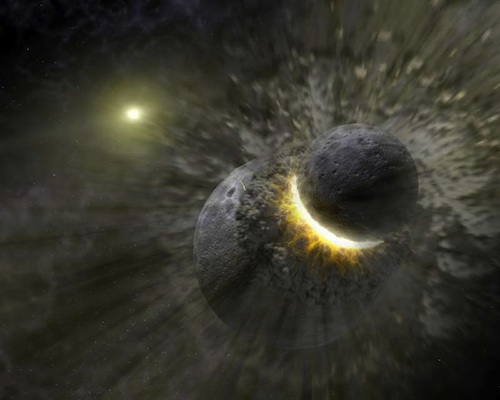 A titanic collision of worlds might have created the moons of Pluto, said astronomer Alan Stern. (JPL)

At first, it’s telling us about the richness of the system of satellites orbiting Pluto. Who would have expected five moons? We’ll probably see more moons when New Horizons gets there. In the meantime, we can try looking harder with Hubble.

This new moon is really telling us something about the origin event that created Pluto’s small moons, along with Pluto’s giant moon Charon – 1,200 kilometers, or almost 800 miles across. It might have been some sort of titanic collision between Pluto and some other rogue planet in the ancient past of our solar system. But we haven’t figured all that out. We’re just at the beginning days of doing the forensics. 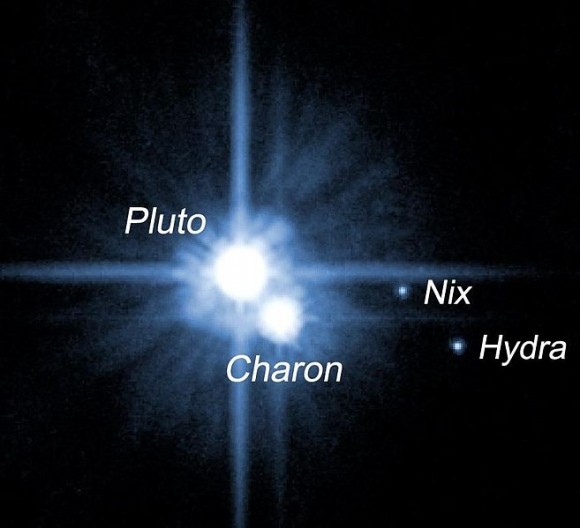 Here is Pluto, with the first three of its known moons. Astronomers found the largest moon, Charon, in 1978. They found two more – now called Nix and Hydra – in 2005. They found a fourth moon in 2011, and now a fifth.

The discovery of the Pluto’s fifth moon, little P5, comes on the heals of a 2011 discovery of a Plutonian moon P4, also made using data from the Hubble Space Telescope. Astronomers say the five moons in the Pluto system form a series of neatly nested orbits, “a bit like Russian dolls,” according to Hubble Pluto Team lead scientist Mark Showalter of the SETI Institute

Stern told me that much remains to be learned about Pluto and its moons.

In three years, New Horizons will arrive. This is NASA’s first mission to Pluto. It’ll be the first reconnaissance of the system. And the discovery of this moon shows us just how exciting it’ll be when we get up close with the sophisticated instruments carried by New Horizons and can explore Pluto for the first time.

Alan Stern: ‘A Chihuahua is still a dog, and Pluto is still a planet’

Neil deGrasse Tyson on how the Pluto debate began

Bottom line: Astronomers have discovered a new moon of Pluto, which they are informally calling P5 and whose official provisional designation is S/2012 (134340). They made the discovery using the Hubble Space Telescope’s Hubble’s Wide Field Camera 3 in a series of images taken in late June and early July 2012. The New Horizons mission is now en route to Pluto. It will become the first spacecraft ever to fly closely past the Pluto system in 2015.