1 Ceres is the largest and most massive object in the main asteroid belt, between the orbits of Mars and Jupiter. Dawn will reach it in March, 2015. 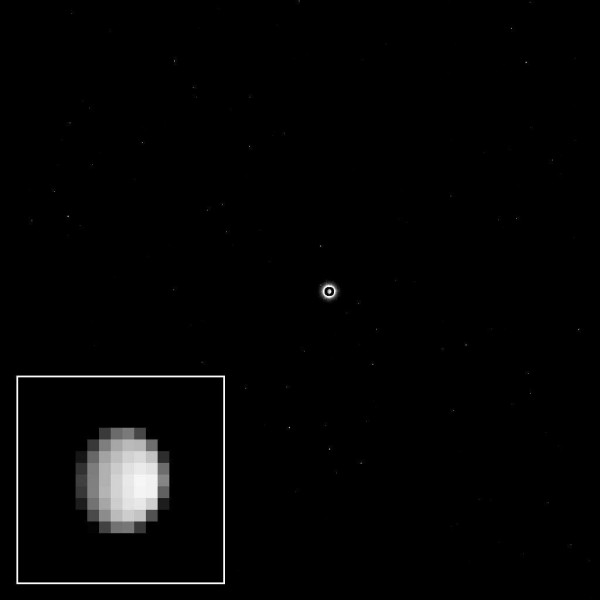 Here, the 976-kilometer-wide / 606-mile-wide main belt asteroid / protoplanet / dwarf planet 1 Ceres is seen by the approaching Dawn spacecraft from a distance of 1.2 million kilometers / 745,000 miles, on December 1, 2014. Dawn begins its approach phase toward Ceres on December 26 and will arrive at Ceres in March, 2015.

These are test images and 1 Ceres appears only nine pixels wide at this point, perfect for a far-encounter camera calibration.

The main image shows 1 Ceres overexposed with a few background stars within the constellation of Ophiuchus the Serpent Bearer.

1 Ceres is the largest and most massive of all of the members of the main asteroid belt between the orbits of Mars and Jupiter. 1 Ceres orbits the sun at an average distance of 414 million kilometers / 257 million miles once every 4 years and 218 days.

1 Ceres appears to have a density of 2.09 g/cm3, suggesting 70% rock and 30% ice in composition, very similar ratios to KBOs / Dwarf planets Eris and Pluto.

There have been suggestions that 1 Ceres did indeed originate in the Kuiper Belt then was ejected inwards and was sent into an orbit within the asteroid belt by Jupiter. Myself, I do not think that is the case. I think 1 Ceres formed close to the current orbit, when the infant sun was approximatelyt 30% dimmer than now, so that region was much colder than now, and that Jupiter prevented 1 Ceres from forming into a fully-fledged planet. Jupiter may also had stunted the growth of Mars and asteroids / protoplanets 2 Pallas, 4 Vesta and 10 Hygeia.

1 Ceres rotates once ever 9 hours 4 minutes in a prograde west to east direction.