How many ETs are in our galaxy? Ask the Alien Civilization Calculator

Researchers at Omni Calculator have created the Alien Civilization Calculator, a unique combination of two different methods of trying to determine how many advanced alien civilizations may exist in our galaxy.

A long-exposure photograph of the Milky Way overlaid by the Drake equation: an equation developed by Frank Drake in 1961 for estimating the number of extraterrestrial civilizations in the galaxy. Image via Medium.com.

Are we alone in our galaxy? If not, how many other civilizations might there be? And … where are they? In 1961, astronomer Frank Drake created what’s now known as the Drake Equation – shown above – a tool for discussing the question of alien life. Now two scientists have incorporated the Drake Equation into a new system called the Alien Civilization Calculator. In addition to the Drake Equation, the new calculator also employs a new method called the Astrobiological Copernican Limits, to find the number of advanced civilizations we might be able to communicate with in the future. Like the Drake Equation itself, the new calculator is a tool for thinking and discussing. It’s an aid for contemplating how many advanced alien civilizations there might be – theoretically speaking – in our own galaxy. Using the calculator, you can compare outcomes using the Drake Equation and the Astrobiological Copernican Limits. And you can adjust the input values, to how different factors might affect the number of alien civilizations in our Milky Way galaxy, and how close the nearest ones might be.

The scientists who created the Alien Civilization Calculator are with Omni Calculator – which has many different types of calculators under one roof (1,197 according to the website) – and which, Omni Calculator says, makes it:

… super simple for anyone to solve their day-to-day calculations and math problems with ease in no time.

So … a super simple answer to the question of alien life? Let’s see. 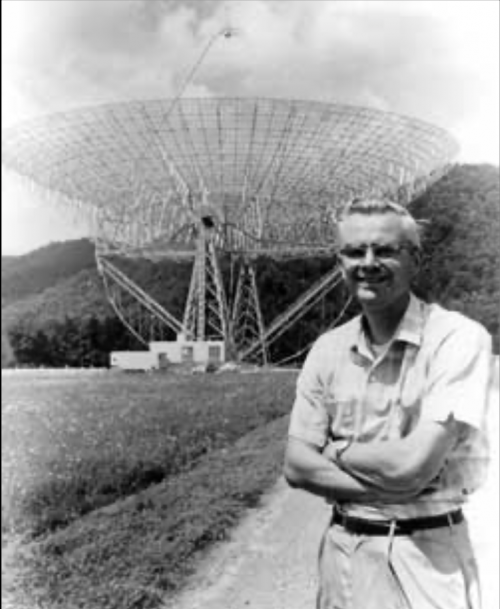 A young Frank Drake. Drake, an astronomer, has been a leader in the search for extraterrestrial intelligence since the 1960s when he implemented Project Ozma to search for radio signals from advanced extraterrestrial civilizations. He developed the Drake equation. And he created the Arecibo Message, a 1974 interstellar radio message from Earth to the globular star cluster M13, carrying encoded information about Earth and its humans. Image via Spaceflight Now.

The inspiration for the calculator came from recent news about the Astrobiological Copernican Limits method, a new method for looking at the possibilities for alien life, based on a study by Tom Westby and Christopher J. Conselice. That study reached the conclusion that there should be at least 36 worlds with advanced alien societies in our galaxy. The peer-reviewed paper was published on April 8, 2020, in The Astrophysical Journal. The study estimated that the nearest civilization would probably be about 17,000 light-years away, so not all that close.

This gave Steve Wooding and Dominik Czernia at Omni Calculator the idea to create a new calculator, combining the Astrobiological Copernican Limits method with the Drake Equation. The two approaches are rather different, so using and comparing both of them was a unique and novel way to try to find possible solutions to what scientists called the Fermi Paradox. That paradox is based on physicist Enrico Fermi’s famous pondering about an apparent contradiction. That is, the Drake equation suggests there should be many, many extraterrestrial civilizations. Yet, all rumors to the contrary aside, there’s been no hard and fast evidence for these civilizations that we all can see and agree upon. Fermi famously asked: 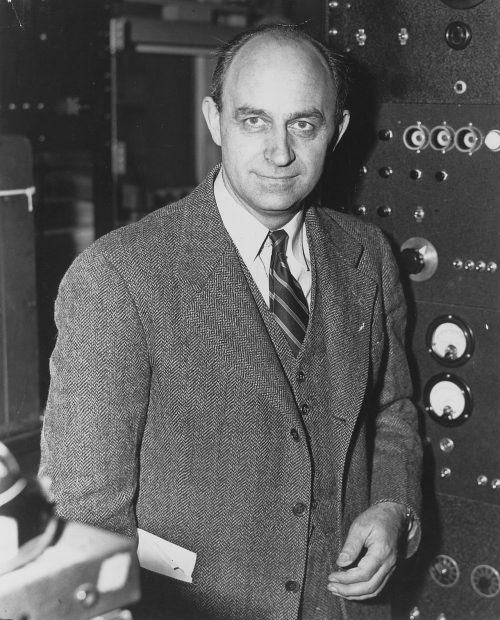 Enrico Fermi (1901-1954) was an Italian-American physicist, who received a 1938 Nobel Prize in physics for his work in nuclear physics. He famously asked, “Where are they?” Image via Wikimedia Commons.

Using the calculator is quite simple. First, you select which method you want to use, and then fill in all the fields in the Milky Way assumptions section. The result gives you an estimate of the number of civilizations in the galaxy, depending on the variables that you input, such as star formation rate, number of stars with planets, etc. It will also tell you how far away the closest of those civilizations should be. You can create many different combinations of variables to test your ideas out with. There’s even a space travel calculator to find out how long it would take to travel to these other worlds by rocket!

So how do the two methods compare?

The first, the Drake Equation, is a rather simple formula, and was developed by astronomer Frank Drake, who is also the father of modern SETI, the Search for Extraterrestrial Intelligence. The formula looks like this:

N stands for the number of detectable civilizations. The other variables are as follows: 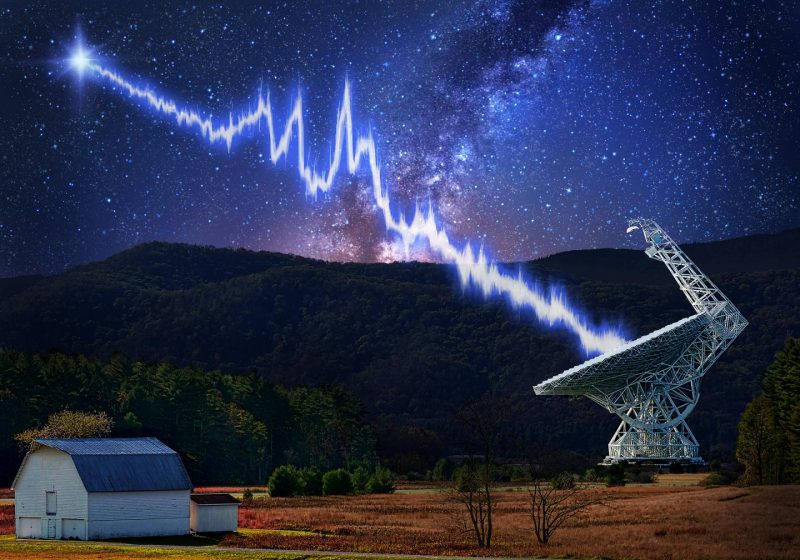 The first three are now well-known or fairly well-known at this point, but the remaining three are not. This of course makes it difficult still to come to any solid conclusions. But the Drake Equation is what has been used by astronomers for decades now, to try to come to at least some kind of understanding of how common, or rare, intelligent life might be.

That’s where the second method, the Astrobiological Copernican Limits, comes into play. Westby and Conselice developed it in April 2020 as a more modern form of the Drake Equation. The parameters are different from the Drake Equation, and based on the assumption that any habitable, Earth-like planet, presumably near in size to the Earth, with a similar composition, atmosphere and water, would eventually host life. That may sound like a big assumption to make, and it is. This method is also based on the one example we have so far of a communicating, intelligent civilization, our own. The paper has generated a lot of discussion, including criticism from some fellow scientists. For example, Caleb Scharf, Director of Astrobiology at Columbia University, wrote on Twitter:

Oh dear oh dear, no, scientists do NOT think there are 'at least 36' contactable civilizations in our galaxy – instead a few wrote a paper making a ton of huge assumptions, and gave a statistical estimate (36 plus/minus 175/32 !!), and then presumably teased the press…

We present a cosmic perspective on the search for life and examine the likely number of Communicating Extra-Terrestrial Intelligent civilizations (CETI) in our galaxy by utilizing the latest astrophysical information. Our calculation involves Galactic star-formation histories, metallicity distributions, and the likelihood of stars hosting Earth-like planets in habitable zones, under specific assumptions which we describe as the Astrobiological Copernican Weak and Strong conditions. These assumptions are based on the one situation in which intelligent, communicative life is known to exist, on our own planet.

For the purposes of the calculator, the premise is that an Earth-like planet could only support intelligent life when it is five billion years old or older. This is based on the knowledge that Earth is about five billion years old, and humanity has only appeared within the last three million years or so, as currently understood. The equation for this method looks like this: 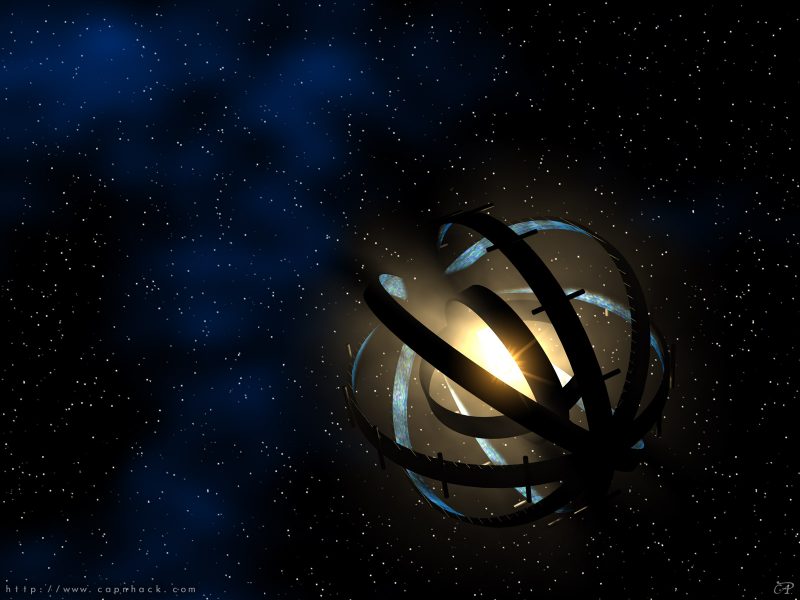 Giant artificial constructions in space, such as this hypothetical type of Dyson sphere, are one kind of possible technosignature. Image via CapnHack.

Again, N stands for the number of intelligent, and communicable, civilizations. But now the variables are as such:

For this model, users can also choose between strong, moderate or weak values in regards to how strict conditions are for intelligent life to appear and evolve. Strong = only a few stars with planets able to host such life, while weak = many such stars.

The maximum distance results from both methods can be used to calculate how many civilizations might be nearby. As might be expected, the farther out you go, the greater the chances of a habitable planet having intelligent life. This is based on the volume of space involved and simple statistics. For example, according to the calculator, there is only a one in 3 billion chance of the nearest star, the Alpha Centauri system, having a planet with intelligent life. But the farther out you go, the greater the odds.

As discussed in EarthSky recently, we are also now getting a better idea of where to search for evidence of advanced alien civilizations. The new Exotica Catalog, aka The Breakthrough Listen Exotic Target Catalog, from Breakthrough Listen, currently lists over 700 objects and phenomena of interest in the universe that might be good places to look. The catalog lists “one of everything” in the known universe that might be a good target for study and observations. 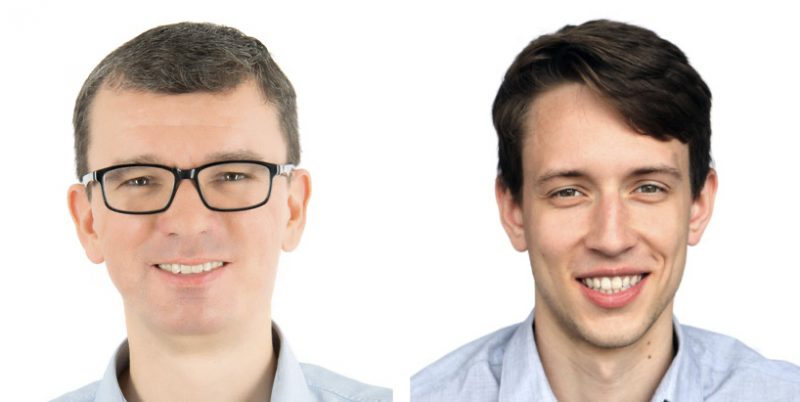 The catalog will help guide the search efforts of those looking for evidence of intelligent life, in particular by searching for technosignatures – artifacts or phenomena produced by a highly advanced intelligent species – that could be detected by telescopes. Modern SETI, the Search for Extraterrestrial Intelligence, is now finally starting to move beyond just looking for alien radio signals. Technosignatures could include many different possibilities, like Dyson spheres built around stars or other huge artificial constructions, lasers or other more exotic communications like Fast Radio Bursts, evidence of industrial pollution on a planet, etc.

The Alien Civilization Calculator is useful in trying to determine how many civilizations might exist in our galaxy, albeit based on many variables, and how close by some of them might be. Projects like the Exotic Catalog and Breakthrough Listen/ SETI will help to narrow down more specific locations and actual detected candidates. This kind of multi-pronged approach is what is needed, even if it still takes a long time to actually find something … or someone.

Bottom line: The new Alien Civilization Calculator combines two different methods of calculating how many advanced alien civilizations may exist in our galaxy.