Alan Shepard became the 1st American in space on May 5, 1961. His suborbital flight took place just 3 weeks after the Soviet Union’s Yuri Gagarin orbited Earth once. 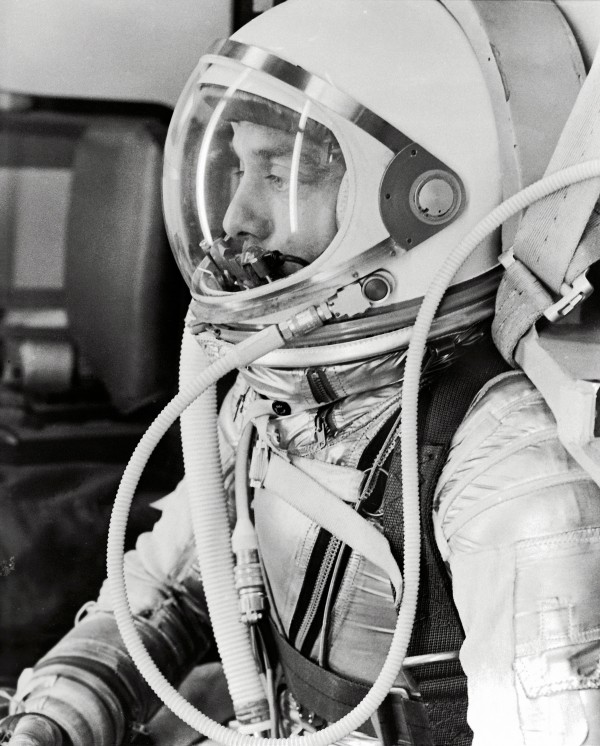 Astronaut Alan B. Shepard Jr., in his silver pressure suit with the helmet visor closed, prepares for his historic flight into space. Date of photo: April 20, 1961. Image via NASA.

May 5, 1961. Just 23 days after Yuri Gagarin of the Soviet Union became the first person in space, NASA launched astronaut Alan Shepard aboard the Freedom 7 capsule powered by a Redstone booster to become the first American in space. His historic flight began from Cape Canaveral in Florida and lasted 15 minutes, 28 seconds, before a splashdown in the Atlantic Ocean.

During the rocket’s acceleration, Shepard experienced 6.3 g, or 6.3 times his normal weight, just before shutdown of the Redstone engine two minutes and 22 seconds after liftoff. Soon after, America’s first space traveler got his first view of the Earth and became one of the first astronauts to say:

What a beautiful view. 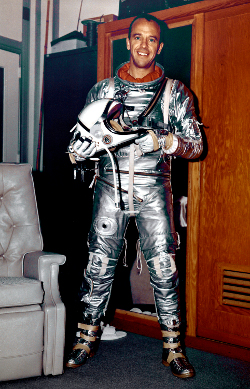 Alan Shepard in his flight suit

His spacecraft splashed down in the Atlantic, 302 miles (486 km) from Cape Canaveral, where he and Freedom 7 were recovered by helicopter and transported to the awaiting aircraft carrier USS Lake Champlain. After his flight, the astronaut said humorously:

It’s a very sobering feeling to be up in space and realize that one’s safety factor was determined by the lowest bidder on a government contract.

Alan Shepard was one of 110 test flight pilots who had volunteered for NASA’s manned space flight program – Project Mercury – in 1959. NASA selected him and six other pilots to be part of the project. All of the pilots went through a rigorous training regimen before NASA made a final selection. Of these magnificent seven, America’s first astronauts, NASA chose Shepard to become the first American to travel into space.

The first American to orbit Earth was John Glenn, aboard Friendship 7 on February 20, 1962. 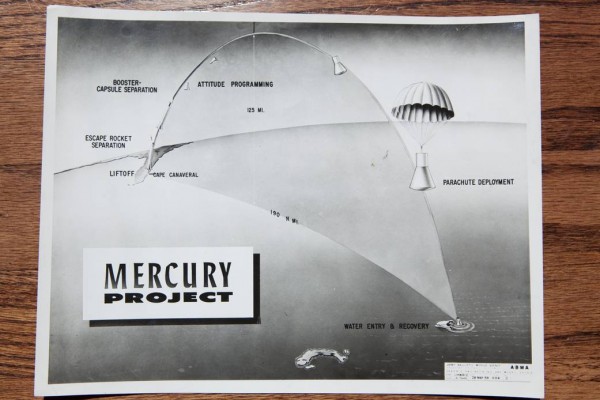 Trajectory of Alan Shepard’s flight aboard Freedom 7 on May 5, 1961. Image via NASA.

NASA launched Alan Shepard into space against a backdrop of the Cold War. The Soviet Union had launched Yuri Gagarin on April 12, 1961, aboard a spacecraft named Vostok (Russian for East). Gagarin completed a single orbit of the Earth, landing after a flight of one hour and 29 minutes. He became a hero in the Soviet Union and around the world.

Three weeks later, NASA astronaut Alan Shepard flew aboard a Mercury spacecraft, which he had named Freedom 7. Kurt Debus, who was NASA’s Launch Operations director at the time and who would go on to serve as the first director of the Kennedy Space Center, said years later:

We knew we were in a competitive situation. But, we never permitted the pressure to make us take risks that might endanger Shepard’s life or the success of the mission.

Just weeks after Shepard’s flight, the Space Race began to heat up. On May 25, 1961, President John F. Kennedy gave a stirring speech before a joint session of Congress, in which he declared his intention to focus U.S. efforts on landing humans on the moon within a decade. Among other things, he said:

I believe that this nation should commit itself to achieving the goal, before this decade is out, of landing a man on the moon and returning him safely to the Earth.

Read more from NASA: Shepard’s Mercury flight was first step on the long journey to Mars 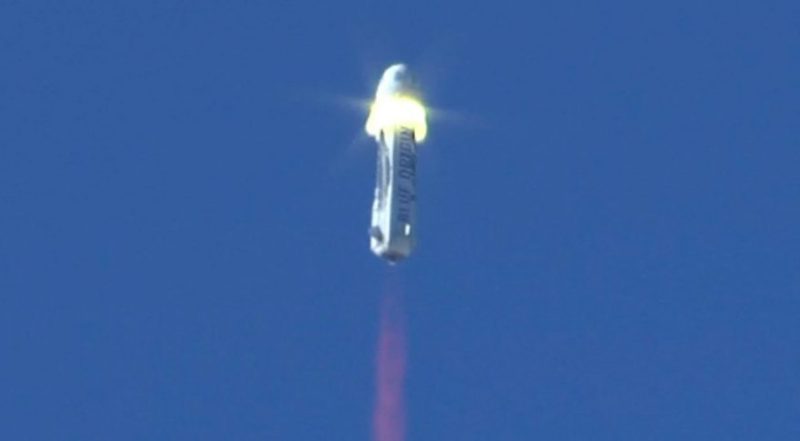 The New Shepard crew capsule – named for Alan Shepard – separates from its propulsion module during an October 5, 2016, in-flight test. New Shepard is a reusable launch system – a vertical-takeoff, vertical-landing suborbital manned rocket – being developed by Blue Origin as a commercial system for suborbital space tourism. Image via Blue Origin/SpaceFlightNews.com.