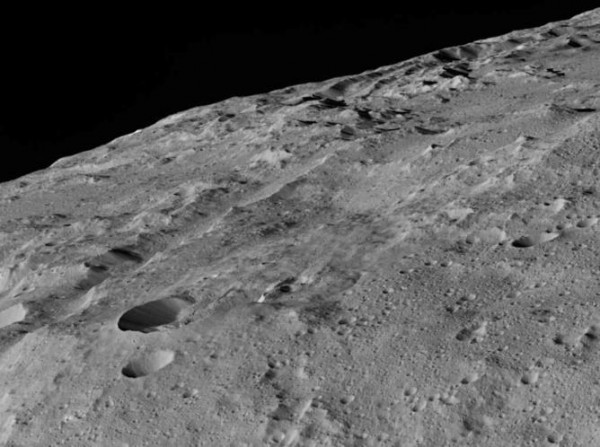 More than a thousand times farther from Earth than the moon, farther even than the sun, an extraordinary extraterrestrial expedition is taking place. NASA’s Dawn spacecraft is exploring dwarf planet Ceres, which orbits the sun between Mars and Jupiter. The probe has just reached the closest point it ever will, and is now beginning to collect its most detailed pictures and other measurements on this distant orb.

Ceres is a remnant from the dawn of our solar system nearly 4.6 billion years ago. All the data Dawn is now sending back will provide insight into Ceres’ history and geology, including the presence of water, past or present. Scientists believe that by studying Ceres, we can unlock some of the secrets of the epoch in which planets, including our own, formed.

But this mission isn’t only for scientists. Discovering the nature of an uncharted world is a thrill that can be shared by anyone who has ever gazed up at the night sky in wonder, been curious about the universe and Earth’s place in it, or felt the lure of a bold adventure into the unknown.

I happen to fall into all those categories. I fell in love with space at the age of four, and I knew by the fourth grade that I wanted to earn a doctorate in physics. (It was a few more years before I did.) My passion for the exploration of space and the grandeur of scientific discovery and understanding has never wavered. It’s a dream come true for me to be the mission director and chief engineer on Dawn at JPL.

False color video of Ceres from distance of 2,700 miles, courtesy of Dawn.

Named for the Roman goddess of agriculture and grain, Ceres was the first dwarf planet discovered, in 1801. That’s 129 years before Pluto – and in fact, both were originally considered planets, only later to be designated dwarf planets.

Although Ceres appeared as little more than a fuzzy blob of light amidst the stars, scientists determined that it’s the behemoth of the main asteroid belt between Mars and Jupiter – nearly 600 miles in diameter. Its surface area is more than a third of the area of the continental US. Before Dawn’s arrival, Ceres was the largest object between the sun and Pluto that a spacecraft had not visited.

Since well before Dawn, we’ve had telescopic evidence that Ceres harbors water. While it’s mostly in the form of ice, scientists have good reason to believe an underground ocean once circulated. The question of whether reservoirs still lurk beneath the alien surface remains open. Dawn’s studies of Ceres may even provide hints about how Earth acquired its own supply of that precious liquid billions of years ago. 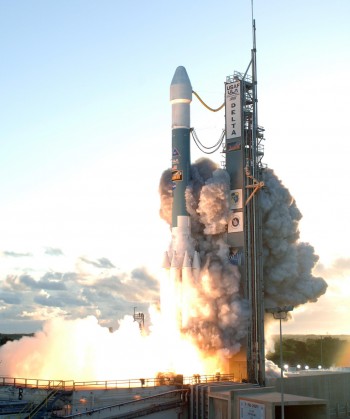 In 2007, we launched Dawn from Cape Canaveral, and it will never again visit its erstwhile planetary home. In 2011, it became the only spacecraft ever to orbit an object in the main asteroid belt, devoting 14 months to scrutinizing protoplanet Vesta. Dawn showed us this second most massive resident of the belt is more closely related to the terrestrial planets (including Earth) than to the much smaller chunks of rock that are typical of asteroids.

The unique capability to travel to worlds beyond Mars, enter orbit and maneuver extensively and then depart for yet another destination is achieved with advanced ion propulsion. The technology spent much of its history in the domain of sci-fi, including Star Trek and Star Wars. (Darth Vader’s TIE Fighter is named for its twin ion engines.) But what may have seemed only science fiction is science fact. Without its three ion engines (note that Dawn does the TIE Fighters one better), Dawn’s mission wouldn’t be possible.

The ion engines use xenon gas, a chemical cousin of helium and neon. With electrical power from Dawn’s large solar panels, the xenon is given an electrical charge in a process called ionization. The engines use high voltage to accelerate the ions. They’re then shot out of the engines at up to 90,000 mph. When the ions leave the spacecraft at this fantastically high speed, it’s pushed in the opposite direction. Dawn’s ion propulsion system is exceptionally efficient – 10 times as efficient as conventional spacecraft propulsion. It’s comparable to your car getting 250 miles per gallon. 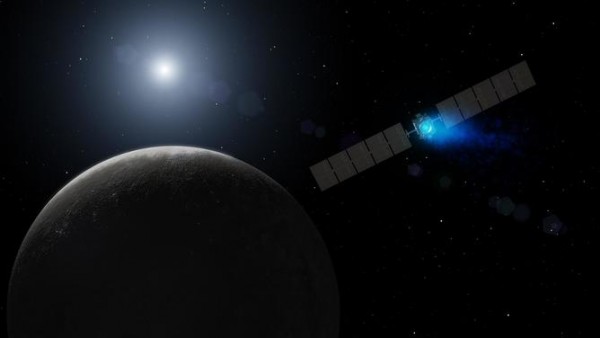 Finally, after a journey of more than seven years and three billion miles, our interplanetary ambassador reached Ceres on March 6 2015, and gracefully entered the dwarf planet’s permanent gravitational embrace.

Mission controllers at JPL then piloted the craft to three orbits at successively lower altitudes, so we could first obtain an overview and then gain better and better views of this vast unexplored territory. And Dawn has just performed the penultimate act in its grand celestial choreography. It’s spent the last seven weeks maneuvering to its lowest altitude. Orbiting now about 240 miles above the exotic terrain of rock and ice, Dawn is closer to Ceres than the International Space Station is to Earth.

Included in the spacecraft’s suite of sophisticated sensors is a camera that has already taken 10,000 pictures of alien landscapes on Ceres. Following from Ceres’ own name, features Dawn discovers are named for agricultural deities and festivals from around the world.

We see rugged terrain and smooth areas, sometimes with streaks of material that’s flowed across it. There are craters large and small, created by billions of years of assaults in the rough-and-tumble neighborhood of the asteroid belt. We see mountains and valleys, huge fissures in the ground and bright spots that glow with a mysterious luster, reflecting much more sunlight than most of the dark surface.

The most striking of these shining regions, inside the 55-mile-wide Occator Crater (named for the Roman deity of harrowing), is so bright that the Hubble Space Telescope detected a hint of it a decade ago. Dawn’s pictures to date have been more than 200 times sharper than Hubble’s. The images we’re starting to get back now will be even better, revealing 850 times the detail that Hubble had provided. 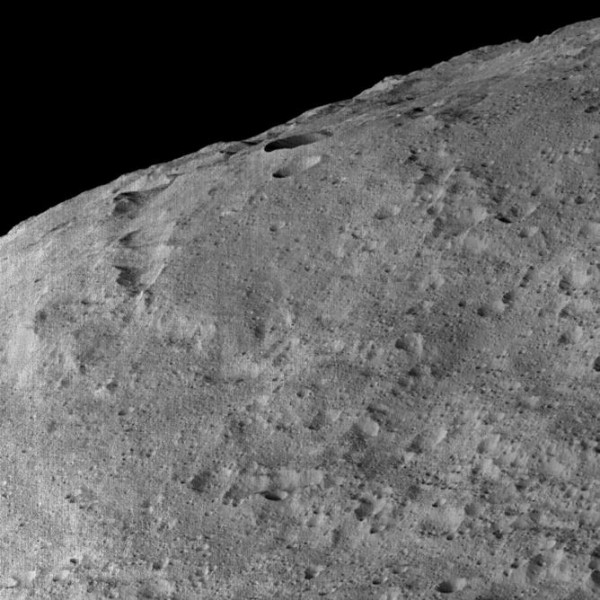 Dawn took this image in its low-altitude mapping orbit from an approximate distance of 240 miles (385 kilometers) from Ceres on December 10, 2015. Image credit: NASA/JPL-Caltech/UCLA/MPS/DLR/IDA

Dawn has shown us a mountain named Ahuna Mons that towers more than 20,000 feet in an otherwise unremarkable area, comparable to the elevation of North America’s tallest peak, Mt Denali. (Ahuna is a celebration of thanksgiving for the harvest among the Sumis of northeast India.) Bright streaks seem to suggest some unidentified material once flowed down the steep slopes of Ahuna Mons. While scientists have not yet determined what forces and processes shaped this conical mountain, it doesn’t take a geologist to notice its resemblance to terrestrial volcanic cones. Imagine what it might have been like to witness an eruption of some strange combination of water and other chemicals on this cold, distant world.

Beyond photos, Dawn will take a great many other measurements from its new orbital perch before its mission concludes in 2016. It will measure radiation to help scientists determine what types of atoms are present on Ceres. It will use infrared light to identify the minerals on Ceres’ surface. And it will gauge subtle variations in the gravitational field to reveal the interior structure of the dwarf planet.

Once the spacecraft exhausts the small supply of conventional rocket propellant it squirts through thrusters to control its orientation in the zero-gravity, frictionless conditions of spaceflight, it will no longer be able to point its solar arrays at the sun, its antenna at Earth, its sensors at Ceres or its ion engines in the direction needed to travel elsewhere. But the ship will remain in orbit around Ceres as surely as the moon remains in orbit around Earth and Earth remains in orbit around the sun. Its legacy in the history of our efforts to reach out from our humble home to touch the stars is secure. Dawn will become an inert celestial monument to humankind’s creativity, ingenuity, and passion for exploring the cosmos. 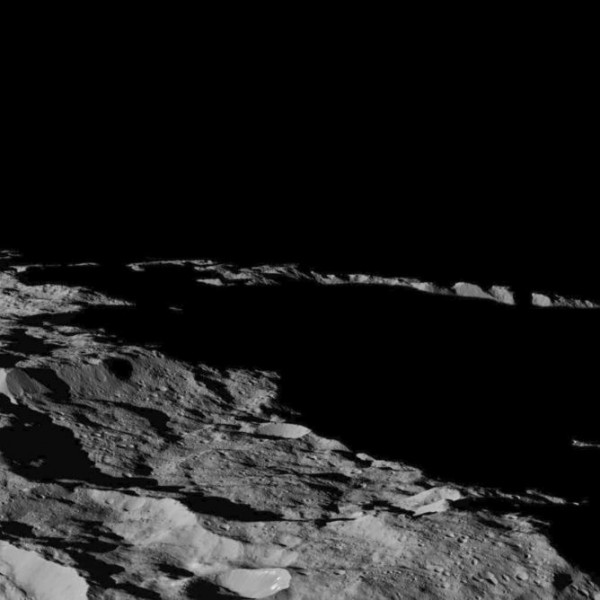 This part of Ceres, near the south pole, has such long shadows because, from the perspective of this location, the sun is near the horizon. At the time When Dawn took this image on December 10, 2015 the sun was 4 degrees north of the equator. If you were standing this close to Ceres’ south pole, the sun would never get high in the sky during the course of a nine-hour Cerean day. Image credit: NASA/JPL-Caltech/UCLA/MPS/DLR/IDA