A giant relic of a disrupted tadpole galaxy

The tail of the “tadpole” is some 500,000 light-years long. If it were at the distance of the Andromeda galaxy – about 2.5 million light years from Earth – it would reach a fifth of the way to our own Milky Way. 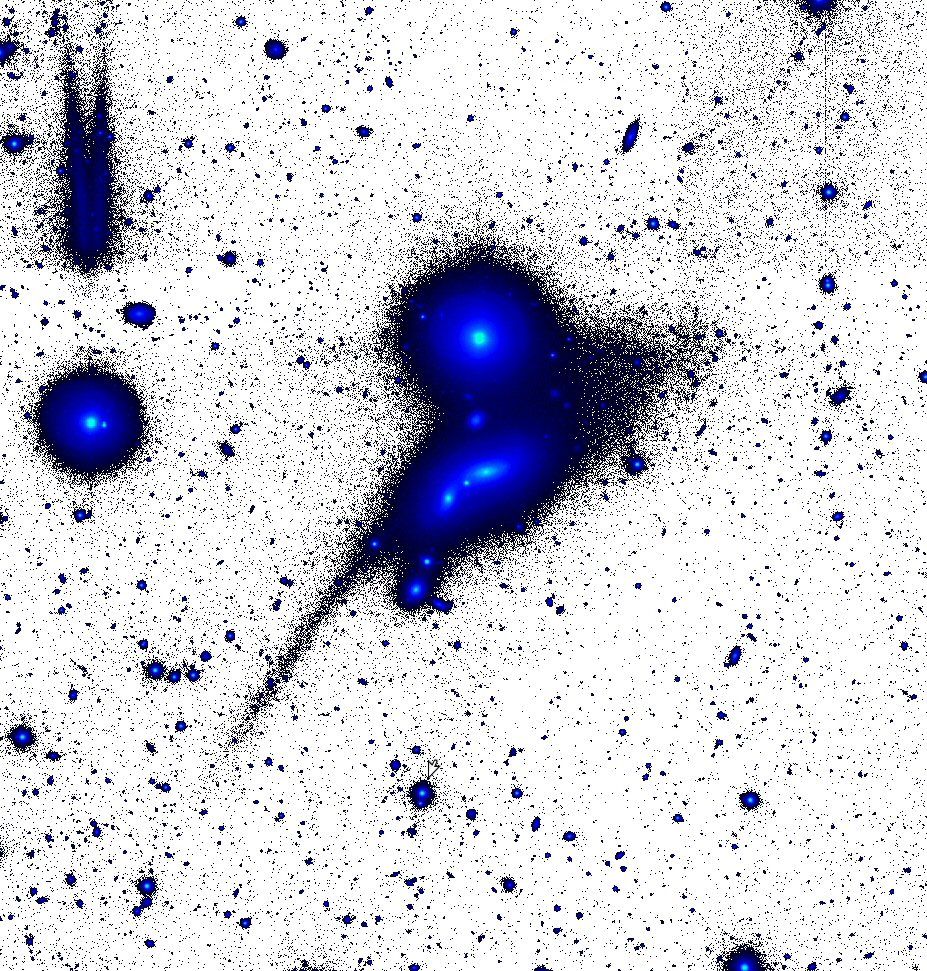 Here are 2 galaxies in a galaxy group with an unusual name: Hickson’s Compact Group 98. See the 2 “smudges” at the center of the image? Each smudge is a galaxy not unlike our Milky Way. Notice the “tadpole” structure of the pair, which astronomers believe was formed when the pair demolished a much smaller galaxy. Image via N. Brosch/Tel Aviv University/RAS.

When larger galaxies collide with smaller ones, the smaller galaxies’ stars are either incorporated into the larger galaxies, or they’re ejected into intergalactic space. In this ongoing process, the galaxies around us in space may form patterns discernible to our human eyes and brains, in the great Rorschach test of the night sky. And so a team of astronomers from Israel, the U.S. and Russia has identified a disrupted galaxy that they say resembles a giant “tadpole,” complete with an elliptical head and a long, straight tail, located about 300 million light-years away from Earth. They describe this “tadpole” galaxy in research that will appear in the January 2019 issue of the peer-reviewed journal Monthly Notices of the Royal Astronomical Society (you’ll find it online here).

Astronomer Noah Brosch of Tel Aviv University led the research for the study. He said:

We have found a giant, exceptional relic of a disrupted galaxy.

Disrupted, in this case, means by another galaxy. In other words, astronomers believe the “tadpole” galaxy pair formed when they collided with and demolished a much smaller galaxy. According to the study, when the gravitational force of two larger galaxies pulled on stars in this smaller, vulnerable galaxy, the stars closer to the pair formed the “head” of the tadpole. Stars lingering in the victim galaxy formed the “tail.”

Astronomer R. Michael Rich of UCLA, who participated in the study, said:

What makes this object extraordinary is that the tail alone is almost 500,000 light-years long. If it were at the distance of the Andromeda galaxy, which is about 2.5 million light years from Earth, it would reach a fifth of the way to our own Milky Way.

Overall, the “tadpole” galaxy is one million light-years long from end to end, 10 times larger than our home galaxy, the Milky Way.

It’s part of a small group of galaxies called Hickson’s Compact Group 98, which, astronomers believe, will merge into a single galaxy in the next billion years.

Bottom line: Astronomers have identified 2 galaxies in the galaxy group Hickson’s Compact Group 98 that have a “tadpole” structure. Astronomers believe this structure was formed when the pair demolished a much smaller galaxy.