These distant moons may harbor life

Astronomers have identified 121 giant exoplanets whose moons might be capable of supporting life. 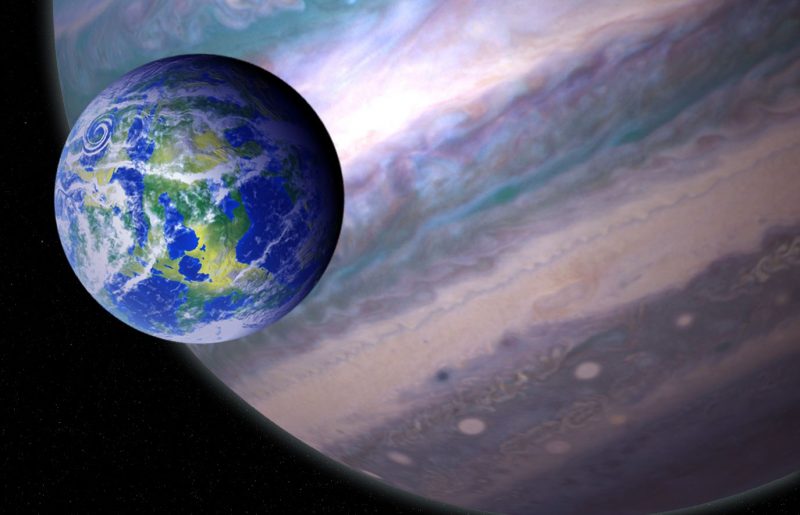 The search for tell-tale biosignatures – signs that distant life is affecting its planet’s atmosphere – is a next step in exoplanet research. We don’t mean biosignatures from alien intelligences, necessarily. Any form of life, including microbial life, might chemically alter its planet’s atmosphere. Biosignature studies are often mentioned in connection with the James Webb Space Telescope – Hubble’s successor – currently due to launch in 2020. Late last month (May 30, 2018) – in preparation for future biosignature searches by the Webb and other future telescopes – researchers at the University of California, Riverside and the University of Southern Queensland announced they’ve identified 121 giant exoplanets with orbits within the habitable zone – the zone within which liquid water can exist – of their stars. Although no exomoons are yet known for these planets, it’s likely some exomoons do exist. Some might have atmospheres. Some might be supporting life, whose biosignatures we can detect.

The new study (online here) has been accepted for publication in the peer-reviewed Astrophysical Journal.

Wait. We don’t know of any exomoons, and yet we’re planning to study them? Consider that it wasn’t until 1995 that the star 51 Pegasi went down in history as the first main-sequence star – or star in the same stage of its evolution as our sun – known to have a planet. Now, astronomers know of thousands of exoplanets and exoplanet candidates. The discovery of exomoons is surely on the horizon. Astronomer Stephen Kane at UC Riverside – a co-author on the new research – said:

There are currently 175 known moons orbiting the eight planets in our solar system. While most of these moons orbit Saturn and Jupiter, which are outside the sun’s habitable zone, that may not be the case in other solar systems. Including rocky exomoons in our search for life in space will greatly expand the places we can look. 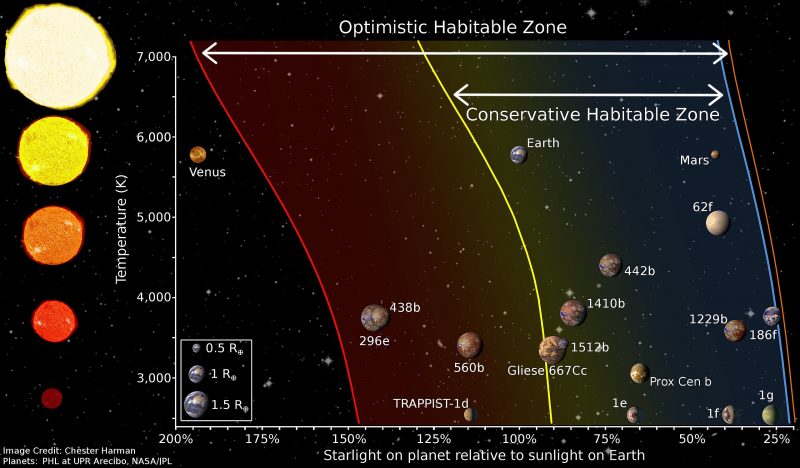 View larger. | The Habitable Zone. Shown is temperature vs. starlight received. Important exoplanets are placed on the diagram, plus Earth, Venus, and Mars. Image via Chester Harman/ Wikimedia Commons.

The astronomers who conducted this study said their work will help guide the design of future telescopes that can detect exomoons. They pointed out that exomoons might provide a favorable environment for life, perhaps even better than Earth. That’s because they receive energy not only from their star, but also from radiation reflected from their planet.

Michelle Hill, an undergraduate student at the University of Southern Queensland who is working with Kane and will join UCR’s graduate program in the fall, was lead author on the new research. She commented:

Now that we have created a database of the known giant planets in the habitable zone of their star, observations of the best candidates for hosting potential exomoons will be made to help refine the expected exomoon properties. Our follow-up studies will help inform future telescope design so that we can detect these moons, study their properties, and look for signs of life.

Bottom line: Researchers in California and Australia say they’ve identified 121 giant planets whose moons might be capable of supporting life.