The first of two July 2015 full moons comes tonight. The second July full moon – aka a Blue Moon – will come on July 31.

To learn the history of Blue Moons, click here

By recent popular acclaim, the second of two full moons in a single calendar month goes by the name of Blue Moon. According to folklore, there are other definitions for Blue Moon. A Blue Moon can also be the third of four full moons in a season. But the second-full-moon-in-a-month definition is the easier to remember, and it’s probably what most people think of when they hear Blue Moon. Once again, the Blue Moon – the second full moon of July 2015 – will come on July 31 at 10:43 Universal Time. 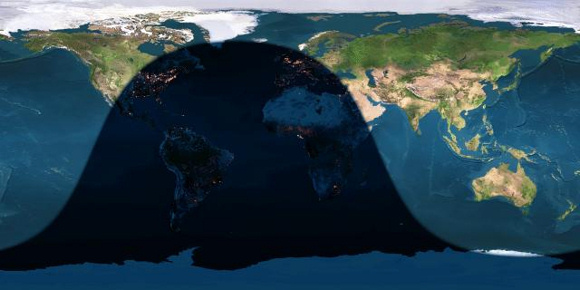 Day and night sides of Earth at the instant of the first July 2015 full moon (2015 July 2 at 2:20 Universal Time). Image credit: Earth and Moon Viewer

If we exclude February, each calendar month is either 30 or 31 days long. On the other hand, the time period between full moons varies from about 29.3 to 29.8 days. So if the full moon comes very early in the month – as it does in July 2015 – that leaves enough time for another full moon to beat out the clock before the month’s end.