Updated with new observations every 12 hours, the computer model predicts critical details such as the extent of the blaze and changes in its behavior.

Scientists have developed a new computer modeling technique that offers the promise, for the first time, of producing continually updated daylong predictions of wildfire growth throughout the lifetime of long-lived blazes.

Scientists at the National Center for Atmospheric Research (NCAR) and the University of Maryland devised the technique, which combines cutting-edge simulations portraying the interaction of weather and fire behavior with newly available satellite observations of active wildfires. Updated with new observations every 12 hours, the computer model predicts critical details such as the extent of the blaze and changes in its behavior. 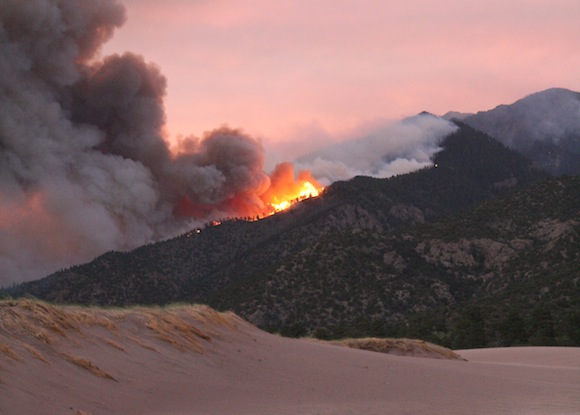 On June 6, 2010, lightning ignited the Medano Fire in Great Sand Dunes National Park in Colorado. By the time this image was taken on June 23, more than 5,000 acres had burned. ©UCAR Photo by David Hosansky.

The breakthrough is described in a study appearing today in an online issue of Geophysical Research Letters, after first being posted online last month.

“With this technique, we believe it’s possible to continually issue good forecasts throughout a fire’s lifetime, even if it burns for weeks or months,” said NCAR scientist Janice Coen, the lead author and model developer. “This model, which combines interactive weather prediction and wildfire behavior, could greatly improve forecasting—particularly for large, intense wildfire events where the current prediction tools are weakest.”

Firefighters currently use tools that can estimate the speed of the leading edge a fire but are too simple to capture crucial effects caused by the interaction of fire and weather.

The researchers successfully tested the new technique by using it retrospectively on the 2012 Little Bear Fire in New Mexico, which burned for almost three weeks and destroyed more buildings than any other wildfire in the state’s history.

The research was funded by NASA, the Federal Emergency Management Agency, and the National Science Foundation, which is NCAR’s sponsor.

In order to generate an accurate forecast of a wildfire, scientists need a computer model that can both incorporate current data about the fire and simulate what it will do in the near future.

Over the last decade, Coen has developed a tool, known as the Coupled Atmosphere-Wildland Fire Environment (CAWFE) computer model, that connects how weather drives fires and, in turn, how fires create their own weather. Using CAWFE, she successfully simulated the details of how large fires grew.

But without the most updated data about a fire’s current state, CAWFE could not reliably produce a longer-term prediction of an ongoing fire. This is because the accuracy of all fine-scale weather simulations declines significantly after a day or two, thus affecting the simulation of the blaze. An accurate forecast would also have to include updates on the effects of firefighting and of such processes as spotting, in which embers from a fire are lofted in the fire plume and dropped ahead of a fire, igniting new flames.

Until now, the kind of real-time data that would be needed to regularly update the model has not been avaliable. Satellite instruments offered only coarse observations of fires, providing images in which each pixel represented an area a little more than a half mile across (1 kilometer by 1 kilometer). These images might show several places burning, but they could not distinguish the boundaries between burning and non-burning areas, except for the largest wildfires.

To solve the problem, Coen’s co-author, Wilfrid Schroeder of the University of Maryland, has produced higher-resolution fire detection data from a new satellite instrument, the Visible Infrared Imaging Radiometer Suite (VIIRS), which is jointly operated by NASA and the National Oceanic and Atmospheric Administration (NOAA). Launched in 2011, this new tool provides coverage of the entire globe at intervals of 12 hours or less, with pixels about 1,200 feet across (375 meters). The higher resolution enabled the two researchers to outline the active fire perimeter in much greater detail.

Coen and Schroeder then fed the VIIRS fire observations into the CAWFE model. By restarting the model every 12 hours with the latest observations of the fire extent—a process known as cycling—they could accurately predict the course of the Little Bear fire in 12- to 24-hour increments during five days of the historic blaze. By continuing this way, it would be possible to simulate the entire lifetime of even a very long-lived fire, from ignition to extinction.

“The transformative event has been the arrival of this new satellite data,” said Schroeder, a professor of geographical sciences who is also a visiting scientist with NOAA. “The enhanced capability of the VIIRS data favors detection of newly ignited fires before they erupt into major conflagrations. The satellite data has tremendous potential to supplement fire management and decision support systems, sharpening the local, regional, and continental monitoring of wildfires.”

The researchers said that forecasts using the new technique could be particularly useful in anticipating sudden blowups and shifts in the direction of the flames, such as what happened when 19 firefighters perished in Arizona last summer.

In addition, they could enable decision makers to look at several newly ignited fires and determine which pose the greatest threat.

“Lives and homes are at stake, depending on some of these decisions, and the interaction of fuels, terrain, and changing weather is so complicated that even seasoned managers can’t always anticipate rapidly changing conditions,” Coen said. “Many people have resigned themselves to believing that wildfires are unpredictable. We’re showing that’s not true.”