Researchers find that double star Fomalhaut is actually a triple

As seen from Earth, Fomalhaut C appears far from the big, bright star that is Fomalhaut A. The two stars are separated by roughly 11 full moon-diameters in Earth’s sky.

The nearby star system Fomalhaut – of special interest for its unusual exoplanet and dusty debris disk – has been discovered to be not just a double star, as astronomers had thought, but one of the widest triple stars known.

In a paper recently accepted for publication in the Astronomical Journal and posted today (October 3, 2013) to the preprint server arXiv, researchers show that a previously known smaller star in its vicinity is also part of the Fomalhaut system. 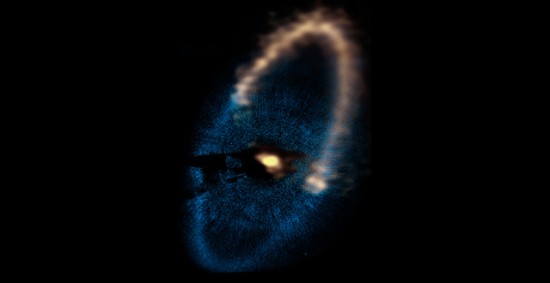 Eric Mamajek, associate professor of physics and astronomy at the University of Rochester, and his collaborators found the triple nature of the star system through a bit of detective work. “I noticed this third star a couple of years ago when I was plotting the motions of stars in the vicinity of Fomalhaut for another study,” Mamajek said. “However I needed to collect more data and gather a team of co-authors with different observations to test whether the star’s properties are consistent with being a third member of the Fomalhaut system.”

Serendipity also played a part. A chance meeting in Chile between Mamajek and Todd Henry, from Georgia State University and director of the Research Consortium On Nearby Stars (RECONS) team, revealed a clue that helped solve the mystery: the distance to the star. Henry recalls sitting in the kitchen of a motel in La Serena, Chile, with Mamajek, discussing nearby stars. “Eric was playing detective on this third star and I just happened to be sitting there with an observing list that contained the unpublished parallax,” Henry said. Parallax is a type of measurement astronomers use to determine distances. “A student at the time, Jennifer Bartlett at the University of Virginia, was working with us on a sample of potentially nearby stars for her Ph.D. thesis, and LP876-10 was on it. Eric and I got to talking, and here we are with a cool discovery.”

By carefully analyzing astrometric (precise movements) and spectroscopic measurements (that allow the temperature and radial velocity to be determined), the researchers were able to measure the distance and speed of the third star. They concluded that the star, until recently known as LP 876-10, is part of the Fomalhaut system, making it Fomalhaut C.

“Fomalhaut C looks quite far apart from the big, bright star that is Fomalhaut A when you look up at the sky from Earth,” added Mamajek. There are roughly 5.5 degrees between the two stars, which is as if they were separated by roughly 11 full moons for an observer on Earth. Mamajek explained that they look this far apart, in part, because Fomalhaut is relatively close to Earth as stars go – approximately 25 light years. If these stars were far away from Earth, they would appear much closer together in the sky. That they appear so far apart could explain why the connection between LP 876-10 and Fomalhaut had been previously missed. Being able to obtain high quality astrometric and velocity data were the other keys.

The researchers also had to show that it would be feasible for these two stars to be bound, rather than moving independently. “Fomalhaut A is such a massive star, about twice the mass of our Sun, that it can exert sufficient gravitational pull to keep this tiny star bound to it – despite the star being 158,000 times farther away from Fomalhaut than the Earth is from the Sun,” Mamajek said.

Mamajek worked with a large team of collaborators to piece together the story of this interesting tiny star. “Henry and the RECONS team have been doing an exhaustive survey of the “Solar Neighborhood,” characterizing the stellar systems that are closest to our solar system and discovering new nearby stars,” said Mamajek. “His team had already gathered several years of observations on this particular star – using the SMARTS 0.9-meter telescope at Cerro Tololo in Chile.” The researchers also needed to know the radial velocity of the star, which Andreas Seifahrt from the University of Chicago measured, and which they pinpoint in the paper to be within about one kilometer per second of that of Fomalhaut A.

There are another 11 star systems closer to our Sun than Fomalhaut that consist of three or more stars, including the closest star system, Alpha Centauri. The new measurements in the paper also show that the Fomalhaut system is the most massive and widest among these nearby multiple systems.

Fomalhaut A is also the 18th brightest star visible in our night sky and one of the few stars with both a directly imaged exoplanet and a dusty debris disk. The famous star has been featured in science fiction novels by writers Isaac Asimov, Stanislaw Lem, Philip K. Dick, and Frank Herbert. Despite being a well-studied system, it was only recently confirmed that Fomalhaut was a binary star – two stars that orbit each other – although it had been first suggested in the 1890s.

One of Mamajek’s colleagues at Rochester, Professor of Physics and Astronomy Alice C. Quillen, has worked for years to understand the way planets shape stellar dust disks like the one surrounding Fomalhaut. In 2006, she predicted the existence of a planet around Fomalhaut, as well as the shape of its orbit, by trying to understand why the debris ring was off-center and why it had a surprisingly sharp edge. The following year a new planet around Fomalhaut was imaged.

Many questions about Fomalhaut A’s exoplanet and debris disk still remain unanswered. For example, astronomers are puzzled by why the exoplanet known as Fomalhaut “b” is on such an eccentric orbit and why the debris disk does not appear to be centered on the star Fomalhaut A. It is possible that Fomalhaut’s wide companions B and C have gravitationally perturbed the Fomalhaut “b” exoplanet and debris belt orbiting Fomalhaut A, however the orbits of Fomalhaut’s companion stars are not well-constrained. The orbits of Fomalhaut B and C around Fomalhaut A are predicted to take millions of years, so pinning down their orbits will be a challenge for future astronomers.

While Fomalhaut C is a red dwarf star – the most common type of star in the universe – Fomalhaut B is an orange dwarf star about three-fourths the mass of our Sun. From the vantage point of a hypothetical planet orbiting Fomalhaut C, Fomalhaut A would appear to be a brilliant white star nine times brighter than Sirius (the brightest star in our night sky) appears from Earth, similar to the typical brightness of the planet Venus. Fomalhaut B would appear to be an otherwise unremarkable bright orangish star similar in brightness to Polaris. The age of the trio is about 440 million years – roughly a 10th of the age of our solar system.

Other collaborators who worked on this paper include Jennifer Bartlett, now at the U.S. Naval Observatory who published a preliminary distance to the star in her Ph.D. thesis, and Matt Kenworthy, from the Leiden Observatory, who measured the rotation period showing Fomalhaut C is a very fast rotator.

Read more about Fomalhaut, one of the brightest stars in our sky