Climate scientists cannot attribute any single weather event — whether a drought, wildfire or extreme storm — to climate change. But extreme events, such as Hurricane Sandy, are glimpses of the types of occurrences the world could be more vulnerable to in the future. As the devastation left by Sandy continues to reverberate, decision-makers at every level are asking: How can we be better prepared? 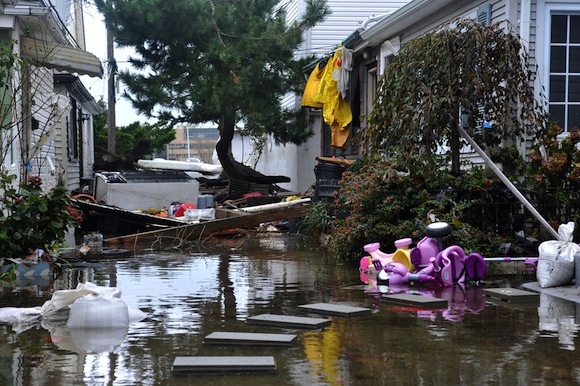 Serious flooding in the buildings at the Sheapsheadbay neighborhood due to impact from Hurricane Sandy in Brooklyn, New York, U.S. Image Credit: Anton Oparin / Shutterstock.com

MIT researchers have developed a new tool to help policymakers, city planners and others see the possible local effects of climate change. Its regional projections of climate trends — such as long-term temperature and precipitation changes — allow local planners to evaluate risks, and how these risks could shape crops, roads and energy infrastructure.

“As we see more extreme events like Sandy, the importance of assessing regional impacts grows,” says lead researcher Adam Schlosser, assistant director for science research at MIT’s Joint Program on the Science and Policy of Global Change. “Our approach helps decision- and policymakers balance the risks … so they can better prepare their communities for future impacts climate change might bring.”

For example, Schlosser says, if a community is planning to build a bridge, it should look at — and plan for — the expected magnitude of flooding in 2050.

“In areas devastated by Sandy, the rebuilding of lost property and infrastructure will come at considerable cost and effort,” Schlosser says. “But should we rebuild to better prepare for future storms like these? Or should we prepare for stronger and/or more frequent storms? There remains considerable uncertainty in these projections and that implies risk. Our technique has been developed with these questions in mind.”

Schlosser’s research partner, Ken Strzepek, a research scientist at the Joint Program on the Science and Policy of Global Change, notes policymakers are now often given little more than a set of extreme circumstances to consider.

In this new method, the researchers quantify the likelihood of particular outcomes and add socioeconomic data, different emission levels and varying degrees of uncertainty. Their technique combines climate-model projections and analysis from the Coupled Model Intercomparison Project used by the Intergovernmental Panel on Climate Change, and the MIT Integrated Global System Modeling framework. The MIT framework is itself a combined computer model that integrates an economic, human system with a natural, earth system.

“This approach allows us to widen the scope and flexibility of climate analysis,” Schlosser says. “It provides us with efficient capabilities to determine climate-change risks.”

The initial study using this approach — accepted by the Journal of Climate and available on the journal’s website — compares a business-as-usual case with a scenario that reduces emissions. The researchers find that lowering emissions reduces the odds of regional warming and precipitation changes. In fact, for many places, the likelihood of the most extreme warming from the business-as-usual case could be eliminated almost entirely.

The study finds diverse climate-change outcomes: southern and western Africa, the Himalayan region, and the area around Hudson Bay in Canada are expected to warm the most; southern Africa and western Europe see the greatest chance of drier conditions. Meanwhile, the Amazon and northern Siberia may become wetter.

Putting the method to work

Schlosser and Strzepek are pursuing partnerships with communities to put their method to work. But while it’s important for every community to begin building climate adaptation into their infrastructure plans, developing countries could reap the greatest benefits.

Strzepek explains why: In the United States, infrastructure plans are designed based on a high standard of risk, while in developing countries projects are typically built to a lower standard of risk. “But if we find that [a developing country] will see greater flooding, and if we’re fairly certain of this, then they would save money in the long run if they built roads to withstand those flooding events,” Strzepek says.

Schlosser and Strzepek traveled to Finland earlier this fall to present their research at a United Nations University-World Institute for Development Economics Research conference. They’ve partnered with this organization to inform developing countries of this new tool for assessing climate change.

“Our approach allows decision-makers to cut down on the level of risk they’re taking when allocating their limited funds to development projects,” Schlosser says. “This can help them see where there are economic benefits to taking a risk-averse approach today, before the damage is done.”