Hidden for all of human history, a 460 mile long canyon has been discovered below Greenland’s ice sheet.

Data from a NASA airborne science mission has revealed an immense and previously unknown canyon hidden under a mile of Greenland ice.

“One might assume that the landscape of the Earth has been fully explored and mapped,” said Jonathan Bamber, professor of physical geography at the University of Bristol in the United Kingdom, and lead author of the study published in today’s issue of Science. “Our research shows there’s still a lot left to discover.”

The canyon has the characteristics of a winding river channel and is at least 460 miles (750 kilometers) long, making it longer than the Grand Canyon. In some places, it is as deep as 2,600 feet (800 meters), on scale with segments of the Grand Canyon. This immense feature is thought to predate the ice sheet that has covered Greenland for the last few million years.

The scientists used thousands of miles of airborne radar data, collected by NASA and researchers from the United Kingdom and Germany over several decades, to piece together the landscape lying beneath the Greenland ice sheet. 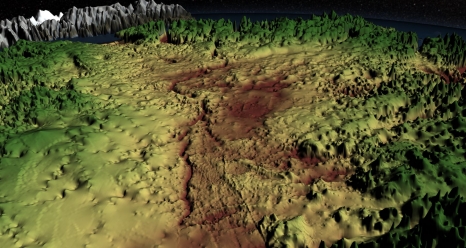 Hidden for all of human history, a 460 mile long canyon has been discovered below Greenland’s ice sheet. Using radar data from NASA’s Operation IceBridge, scientists found the canyon runs from near the center of the island northward to the fjord of the Petermann Glacier. Image credit: NASA

A large portion of this data was collected from 2009 through 2012 by NASA’s Operation IceBridge, an airborne science campaign that studies polar ice. One of IceBridge’s scientific instruments, the Multichannel Coherent Radar Depth Sounder, can see through vast layers of ice to measure its thickness and the shape of bedrock below.

In their analysis of the radar data, the team discovered a continuous bedrock canyon that extends from almost the center of the island and ends beneath the Petermann Glacier fjord in northern Greenland.

At certain frequencies, radio waves can travel through the ice and bounce off the bedrock underneath. The amount of times the radio waves took to bounce back helped researchers determine the depth of the canyon. The longer it took, the deeper the bedrock feature.

“Two things helped lead to this discovery,” said Michael Studinger, IceBridge project scientist at NASA’s Goddard Space Flight Center in Greenbelt, Md. “It was the enormous amount of data collected by IceBridge and the work of combining it with other datasets into a Greenland-wide compilation of all existing data that makes this feature appear in front of our eyes.”

The researchers believe the canyon plays an important role in transporting sub-glacial meltwater from the interior of Greenland to the edge of the ice sheet into the ocean. Evidence suggests that before the presence of the ice sheet, as much as 4 million years ago, water flowed in the canyon from the interior to the coast and was a major river system.

“It is quite remarkable that a channel the size of the Grand Canyon is discovered in the 21st century below the Greenland ice sheet,” said Studinger. “It shows how little we still know about the bedrock below large continental ice sheets.”

The IceBridge campaign will return to Greenland in March 2014 to continue collecting data on land and sea ice in the Arctic using a suite of instruments that includes ice-penetrating radar.