Does a year in space make you older or younger?

The NASA Twins study – featuring astronaut twins Scott and Mark Kelly – was the perfect space experiment. Scott spent a year in space aboard the International Space Station. Mark remained on Earth. The results?

Results from NASA’s Twins Study, which took place from 2015-2016, were published April 11, 2019, in the journal Science. NASA said that the paper — encompassing work from 10 research teams “… reveals some interesting, surprising and reassuring data about how one human body adapted to — and recovered from — the extreme environment of space.”

Daily life aboard the International Space Station moves fast. Really fast. Traveling at approximately 17,000 miles per hour, 300 miles above the Earth, astronauts watch 16 sunrises and sunsets every “day” while floating around in a box with a handful of people they depend on for survival.

One need look no further than Hollywood blockbusters like “The Martian,” “>Gravity” and “Interstellar” for futuristic visions of life beyond Earth as we venture longer and deeper into outer space. But what about the human body’s response to real-life spaceflight – what are the health effects? Will space travelers age at different rates than those of us on Earth? Just how adaptable to the space environment are we? 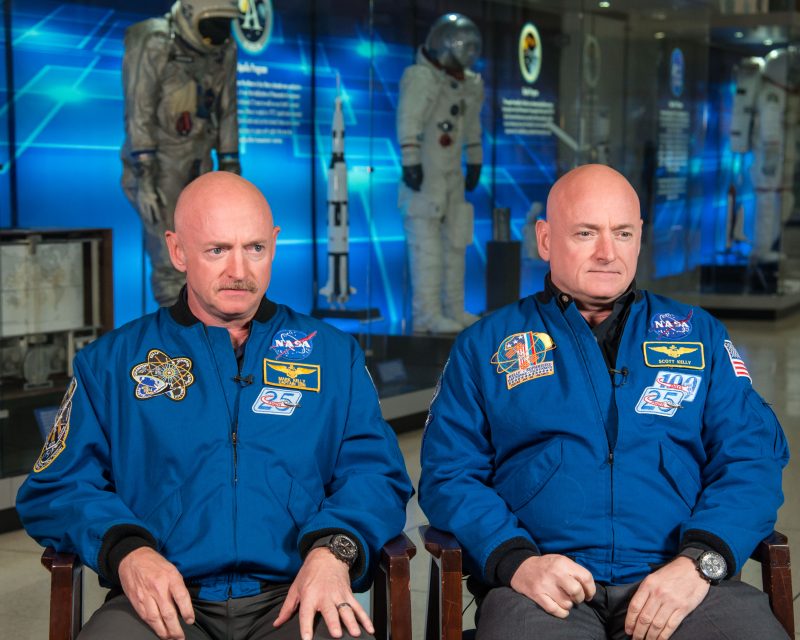 Certainly these are concerns for NASA. How space travel and long-duration missions might change the human body, and whether those changes are permanent or reversible once astronauts return to Earth, is largely unknown. The opportunity to explore these intriguing questions arose with identical twin astronauts Scott and Mark Kelly.

In November of 2012, NASA selected astronaut Scott Kelly for its first one-year mission. At a press conference not long thereafter, it was Scott who hinted that that this mission might provide the chance to compare the impact of space living on his body with his Earth-dwelling identical twin brother, Mark Kelly, who had also been an astronaut and former Navy test pilot. Remarkably, the Kelly twins were individuals of similar “nature (genetics) and nurture (environment),” and so the perfect space experiment was conceived – featuring “space twin and Earth twin” as the stars. Scott would spend a year in space aboard the International Space Station, while his identical twin brother, Mark, would remain on Earth.

The NASA Twins Study represents the most comprehensive view of the human body’s response to space flight ever conducted. Results will guide future studies and personalized approaches for evaluating health effects of individual astronauts for years to come.

As a cancer biologist at Colorado State University I study the impact of radiation exposure on human cells. As part of the Twins Study, I was particularly interested in evaluating how the ends of the chromosomes, called telomeres, were altered by a year in space. 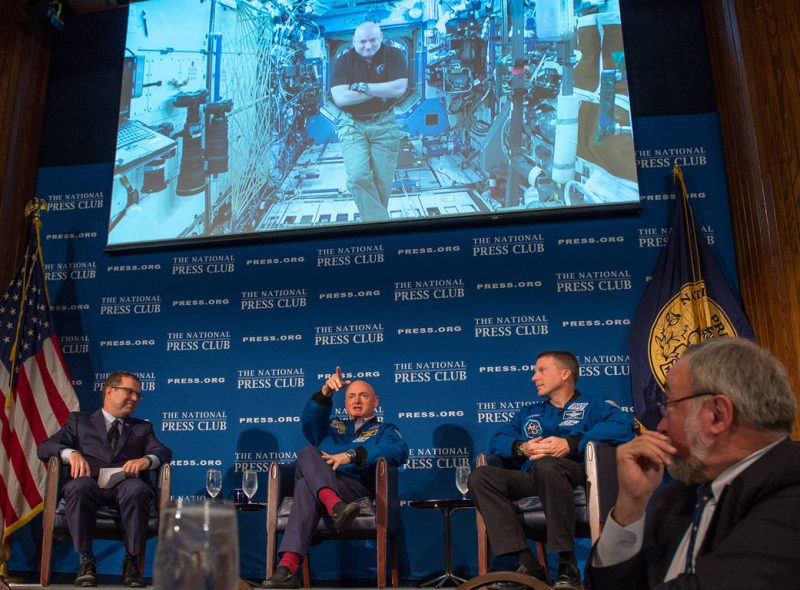 One day before astronaut Scott Kelly reaches the six-month mark in space, he talks live from onboard the ISS with John Hughs, left, his twin brother Mark Kelly and Astronaut Terry Virts, right. Image via NASA/Bill Ingalls.

NASA put out a call and selected 10 peer-reviewed investigations from around the country for the Twins Study. Studies included molecular, physiological and behavioral measures, and for the first time ever in astronauts, “omics”-based studies. Some teams evaluated the impact of space on the genome – the entire complement of DNA in a cell (genomics). Other teams examined which genes were turned on and producing a molecule called mRNA (transcriptomics). Some studies focused on how chemical modifications – which do not alter the DNA code – affected the regulation of the genes (epigenomics). Some researchers explored the proteins produced in the cells (proteomics), whereas others scrutinized the products of metabolism (metabolomics).

There were also studies examining how the space environment might alter the microbiome – the collection of bacteria, viruses and fungi that live in and on our bodies. One investigation examined the immune response to the flu vaccine. Other teams searched Scott’s biological samples for biomarkers of atherosclerosis and upward fluid shifts in the body due to microgravity, which can affect vision and cause headaches. Cognitive performance was also evaluated using computer-run cognition tests specifically designed for astronauts.

More than 300 biological samples – stool, urine and blood – were collected from the twins at multiple times before, during and after the one-year mission.

The Kelly twins are without a doubt one of the most profiled pairs – on or off our planet. They are also one of the most interviewed. One question often asked is whether Scott will return from space younger than Mark – a situation reminiscent of “Interstellar” or Einstein’s so-called “ target=”_blank”Twin Paradox.” However, because the ISS is not traveling anywhere near the speed of light relative to us, time dilation – or the slowing of time due to motion – is very minimal. So any age difference between the brothers would only be a few milliseconds.

Even so, the question of spaceflight-associated aging and the accompanying risk of developing age-related diseases like dementia, cardiovascular disease and cancer – during or after a mission – is an important one, and one that we aimed to address directly with our study of telomere length. 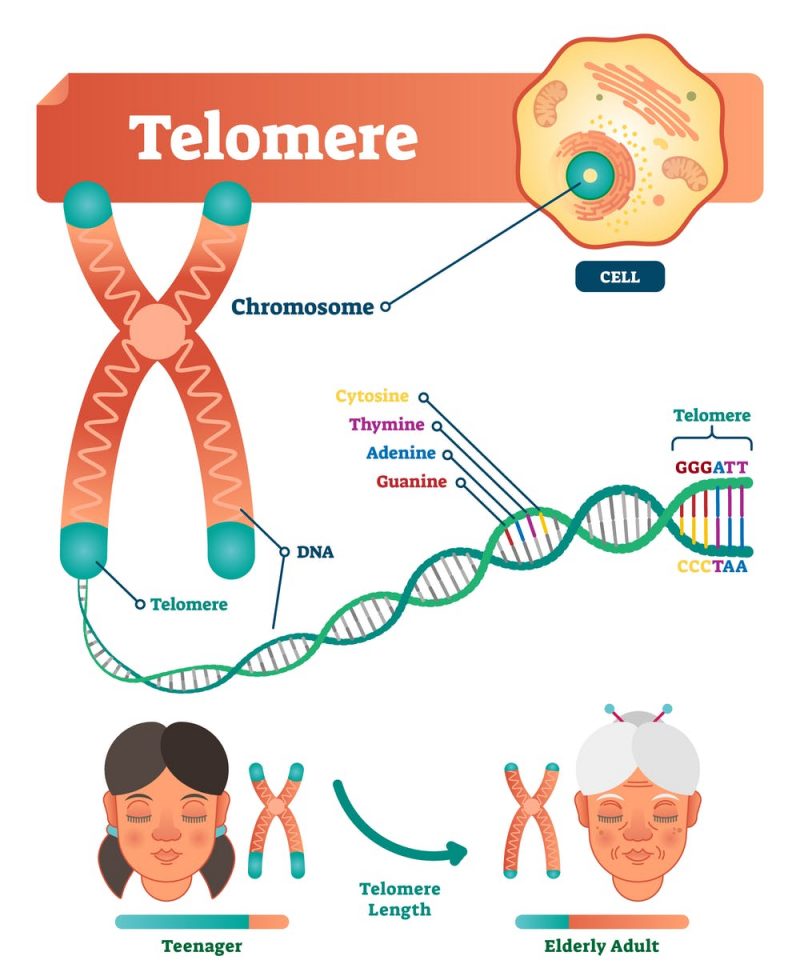 Telomeres are the protective sections of DNA at the tip of the chromosomes. As people age the telomeres get shorter. Image via Vectormine/Shutterstock.

Telomeres are the ends of chromosomes that protect them from damage and from “fraying” – much like the end of a shoestring. Telomeres are critical for maintaining chromosome and genome stability. However, telomeres naturally shorten as our cells divide, and so also as we age. The rate at which telomeres shorten over time is influenced by many factors, including oxidative stress and inflammation, nutrition, physical activity, psychological stresses and environmental exposures like air pollution, UV rays and ionizing radiation. Thus, telomere length reflects an individual’s genetics, experiences and exposures, and so are informative indicators of general health and aging.

Our study proposed that the unique stresses and out-of-this-world exposures the astronauts experience during spaceflight – things like isolation, microgravity, high carbon dioxide levels and galactic cosmic rays – would accelerate telomere shortening and aging. To test this, we evaluated telomere length in blood samples received from both twins before, during and after the one-year mission.

Scott and Mark started the study with relatively similar telomere lengths, which is consistent with a strong genetic component. Also as expected, the length of Earth-bound Mark’s telomeres was relatively stable over the course of the study. But much to our surprise, Scott’s telomeres were significantly longer at every time point and in every sample tested during spaceflight. That was exactly the opposite of what we expected.

Furthermore, upon Scott’s return to Earth, telomere length shortened rapidly, then stabilized during the following months to near pre-flight averages. However, from the perspective of aging and risk of disease, he had many more short telomeres after spaceflight than he did before. Our challenge now is to figure out how and why such spaceflight specific shifts in telomere length dynamics are occurring.

Our findings will have relevance to earthlings as well, since we all grow old and develop age-related conditions. These Twins Study results may provide new clues into the processes involved, and thereby improve our understanding of what we might do to avoid them or extend health span.

The long-term health effects of long duration spaceflight are yet to be determined, but the TWINS Study represents a landmark step in humankind’s journey to the moon, Mars and beyond…and to making science fiction science fact.

Bottom line: Results are coming in from the twin astronaut Kelly brothers in the NASA Twins Study.