What are zoonotic diseases and what can we do about them? 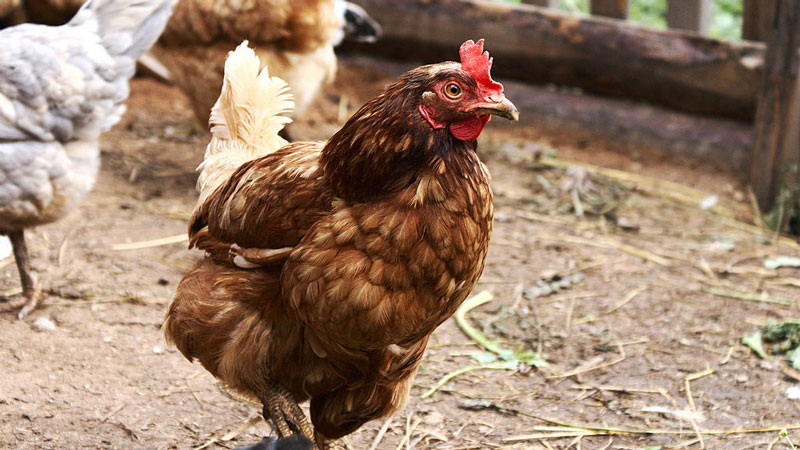 Photograph of a Lohmann Brown hen via Konstantin Nikiforov. Backyard chickens have been linked to outbreaks of salmonellosis in people.

As the world grapples with the current coronavirus pandemic driven by a virus named SARS-CoV-2, many scientists and public health experts are emphasizing that more work needs to be done to prevent the emergence of zoonotic diseases. Zoonotic diseases that leap from animals to humans can wreak havoc on society, as the current pandemic amply demonstrates. Please read on for a quick overview of how zoonotic diseases are defined and the strategies being used to combat them.

One of the first steps to effectively combat zoonotic diseases involves identifying which ones are the most problematic in certain regions. At a workshop held in Washington, D.C., during December 5-7, 2017, U.S. experts were asked to use a prioritization tool to rank 56 zoonotic diseases according to factors such as their potential to cause epidemics and pandemics, disease severity, and prevalence. The top eight zoonotic diseases of concern in the U.S. were identified as (1) zoonotic influenza viruses, (2) salmonellosis, (3) West Nile virus, (4) plague, (5) emerging coronaviruses, (6) rabies virus, (7) brucellosis, and (8) Lyme disease. Many people are familiar with these diseases because such illnesses are problematic in other countries too. By 2018, over 20 countries had likewise prioritized their top zoonotic diseases of concern by using a similar approach, according to the workshop report.

People can be exposed to the pathogens responsible for zoonotic diseases in a variety of settings. For example, exposures can occur through food and water contamination (e.g., the bacteria Escherichia coli, better known as just E. coli), farming (e.g., bird flu and swine flu viruses), direct contact with wildlife (e.g., rabies virus and coronaviruses), insect vectors (e.g., the bacteria that cause Lyme disease), and pets (e.g., Salmonella bacteria). Direct contact with wildlife is the presumed transmission pathway for the coronavirus that caused the first cases of COVID-19 in humans, an outbreak which has now progressed to a global pandemic.

Generally speaking, public health officials use prevention, education, surveillance, and outbreak control measures to fight zoonotic diseases. The goal of prevention efforts is to disrupt the transmission pathways to humans. In the case of rabies, that involves widespread vaccination of dogs and cats that can carry the rabies virus and infect humans they come into contact with. With other zoonotic diseases, the most effective strategies will depend on the pathogen, the animals that host the pathogen, and the human behaviors that put them at risk of exposure. Closures of wildlife markets where coronaviruses reside will be important in preventing future coronavirus outbreaks. 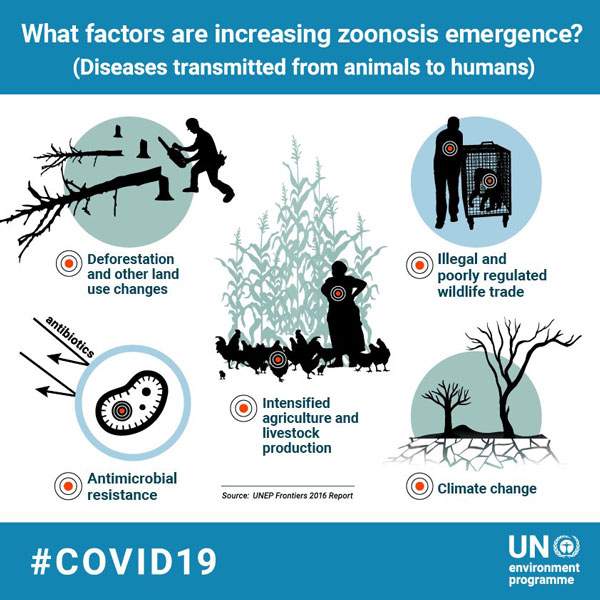 Infographic of factors that are increasing the emergence of zoonotic diseases. Image via UNEP.

The ‘wild’ must be kept ‘wild.’ It is time to restore our forests, stop deforestation, invest in the management of protected areas, and propel markets for deforestation-free products. Where the legal wildlife trade chain exists, we need to do a far better job of improving hygiene conditions. And of course, there is the urgent need to tackle the illegal wildlife trade, the fourth most common crime committed worldwide.

She and others are also urging countries to green their economies as they take steps to recover from the current pandemic. This could help to mitigate the climate changes that are pushing dangerous mosquito-borne zoonotic diseases like dengue and Zika into new regions around the world.

Bottom line: Zoonotic diseases are infectious diseases that are naturally transmitted between animals and humans. These diseases are very common. General strategies for preventing zoonotic diseases include reducing deforestation, ending the illegal wildlife trade, and improving hygiene in settings where interactions with animals are commonplace.