Most work on time travel has focused on its theoretical aspects, but there are also attempts to simulate the effects of time travel experimentally.

A green laser reflecting through glass. Credit: Astroshots42 on Flickr/ One Universe at a Time.

In physics, a time machine is known as a closed timelike curve (CTC). Basically, an object makes a loop through spacetime to interact with its past self. In a recent work published in Nature, a team simulated the possible effect of a time machine using polarized light. Since they couldn’t actually make a beam of light travel back in time, they used two separate beams of light, with one beam mirroring an earlier state of the other. Their focus was to study how quantum computers might be affected by a CTC. 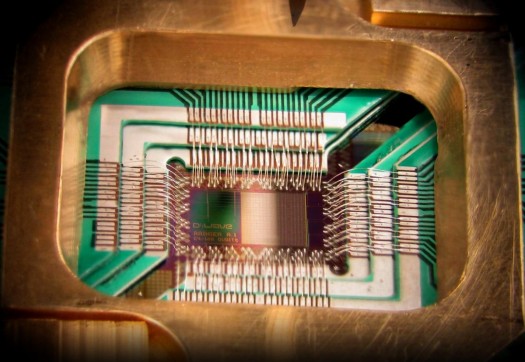 The DWave chip is promoted as a quantum computer. Credit: DWave / One Universe at a Time

Quantum computers use the fuzzy aspects of quantum mechanics to perform calculations. Rather than discrete bits of 0s and 1s, a quantum computer uses quantum states or q-bits. The challenges of quantum computing are huge, but they have the potential to perform some incredibly difficult computations with relative ease. In the early 1990s, David Deutsch demonstrated that if a CTC is self-consistent on a quantum level, then quantum computers could solve computational problems known as PSPACE-complete. In other words, it would be the supercomputer of all supercomputers.

Deutsch’s model is controversial because it relies on an interpretation of quantum mechanics that invokes “parallel universes.” And without a real time machine, his ideas are impossible to prove. For this simulated time machine, the team tweaked the states of their light beams to see what results they could get. They found that the results were self-consistent as Deutsch proposed, and they also completely agreed with relativity. This doesn’t mean that Deutsch is right, but rather if Deutsch is right the effects would work as he claims. There are other quantum models that would also prevent time-traveling paradoxes, but wouldn’t allow for the construction of a super-duper supercomputer.

The results of this work aren’t particularly surprising, but it’s an excellent demonstration of just how subtle and sophisticated optical experiments can be. And until someone is able to make a real time machine, simulated time machines like this one are the only way we can study time travel experimentally.

Bottom line: Most work on time travel has focused on its theoretical aspects, but there are also attempts to simulate the effects of time travel experimentally. This article by Brian Koberlein – originally published in Forbes and also seen at Brian’s blog One Universe at a Time – describes a recent study. Re-printed with permission.