This date in science: Microchip is patented

On February, 6, 1959, Jack Kilby of Texas Instruments, filed a patent application for the integrated circuit, also known as a microchip

February, 6, 1959. On this date, Jack Kilby – who had just started working for Texas Instruments – filed a patent application for the integrated circuit, also known as a microchip. This kind of circuit sits on a small plate or chip of silicon or some other semiconductor material. Kilby is considered the co-inventor of the circuit along with Robert Noyce, who discovered it independently.

The low cost of integrated circuits revolutionized the electronics industry. It made cheaper computers and mobile phones possible. For his work, Kilby won the 2000 Nobel Prize in physics. In an interview with Texas Instruments before his death in 2005, he partially attributed his success to being a new employee bereft of vacation time, saying:

The [time for] cost analysis gave me my first insight into the cost structure of a semiconductor house. 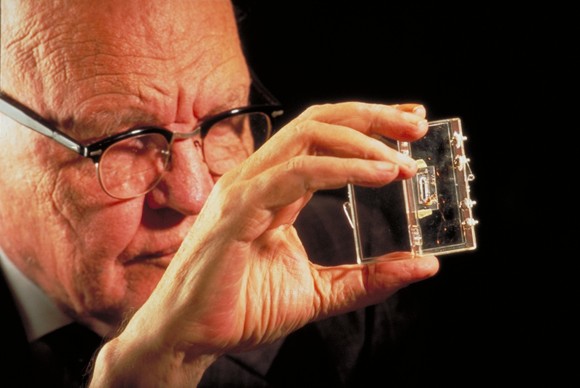 Late in his life, Jack Kilby holds his first integrated circuit, which is encased in plastic. Photo via Texas Instruments

Bottom line: On February, 6, 1959, Jack Kilby of Texas Instruments filed a patent application for the integrated circuit, or microchip.