Chuck Yeager – personification of the ‘right stuff’ – dies at 97

Charles E. “Chuck” Yeager, a military test pilot, became the first to break the sound barrier on October 14, 1947. Afterwards, he was dubbed “the fastest man alive.” He died December 7 at age 97. 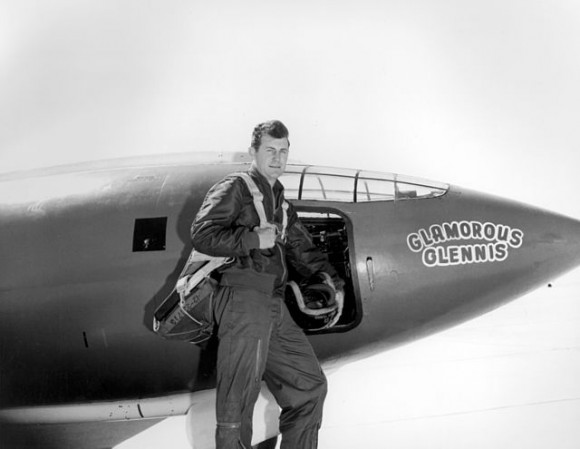 View larger. | Chuck Yeager in the 1940s, in front of a Bell XS-1 aircraft, in which he broke the sound barrier. As with all of the aircraft assigned to him, he named the craft Glamorous Glennis for his wife. Image via Wikimedia Commons.

Chuck Yeager, a military test pilot who became the first pilot to break the sound barrier – the first to fly faster than the speed of sound and survive – died December 7, 2020. His wife, Victoria, announced the death late yesterday from General Yeager’s official Twitter account (@GenChuckYeager). More details about the death are not available at this time.

Yeager – dubbed the fastest man alive – continued setting speed records after his first Mach 1 flight on the morning of October 14, 1947.

Fr @VictoriaYeage11 It is w/ profound sorrow, I must tell you that my life love General Chuck Yeager passed just before 9pm ET. An incredible life well lived, America’s greatest Pilot, & a legacy of strength, adventure, & patriotism will be remembered forever.

Today, most of us know Yeager from the classic 1983 movie The Right Stuff, based on a 1979 novel by Tom Wolfe. Yeager later said that the late actor Sam Shepard, who played Yeager in the movie, was right-on.

Chuck Yeager became the first to break the sound barrier in a Bell XS-1 aircraft he’d nicknamed Glamorous Glennis in tribute to his first wife, Glennis Yeager, who died of ovarian cancer in 1990.

The plane is still on display today at the Smithsonian National Air and Space Museum in Washington, D.C.

We don’t hear much about the sound barrier anymore, because today we know it isn’t a barrier. It’s a term that describes the sudden and dramatic increase in aerodynamic drag and other effects experienced by an aircraft and its pilot approaching the speed of sound. In dry air at 32 degrees Fahrenheit (0 degrees Celsius), the speed of sound is 741 miles per hour (1,192 km/hr).

You can read in Yeager’s own words how he broke the sound barrier in this article at Popular Mechanics, which originally published it in 1987 and re-ran it in 2016, on the 40th anniversary of Yeager’s historic flight.

Yeager won many awards, including the prestigious Collier Trophy.

He enlisted in the Army Air Corps in September 1941 at the age of 18. He fought in World War II before being assigned to fly high-performance aircraft at Edwards Air Force Base in 1947. 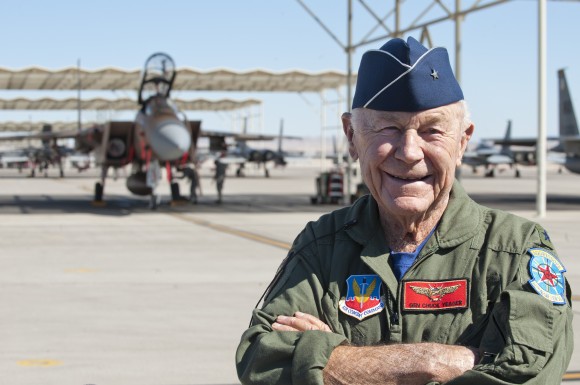 In 2012, the 89-year-old Yeager told reporters that he was still piloting airplanes. This photo via U.S. Air Force/ Lawrence Crespo is from the 55th anniversary of his sound-breaking flight.