It’s been 20 years since the Day of 6 Billion

Our global human population was estimated to reach 6 billion on today’s date in 1999. Eleven years later, in 2011, Earth had gained another billion people. Today – October 12, 2019 – it stands at about 7.7 billion, according to United Nations estimates. 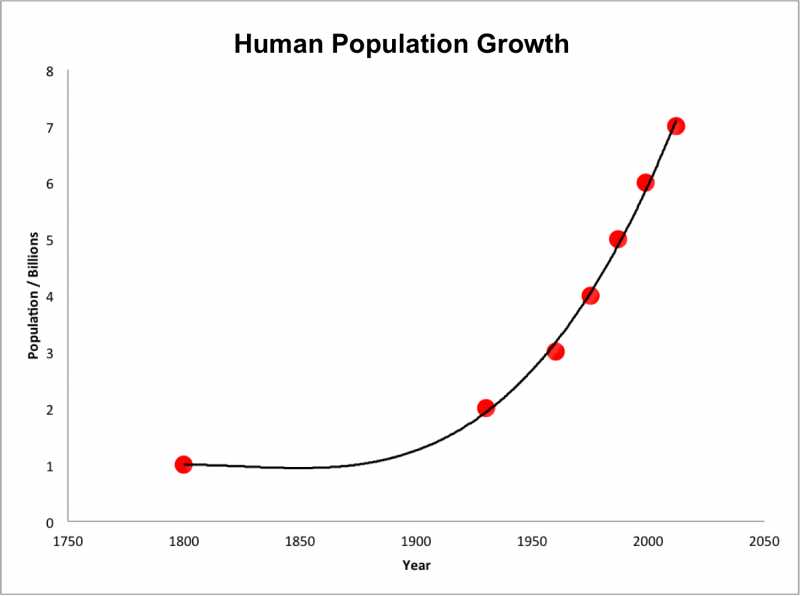 Human population growth from 1800 to 2000, via Wikimedia Commons.

October 12, 1999. The United Nations Population Fund (UNFPA) marked this date as the Day of 6 Billion. That’s because – on October 12, 1999 – the world’s human population was estimated to hit 6 billion, according to the United Nations. It took hundreds of thousands of years for Earth’s human population to reach 1 billion in 1804. The 3 billion milestone came in 1960. Not quite 40 years later, global population had doubled to 6 billion.

Population experts did not agree on the exact date that world population reached the six billion milestone, of course, but they came close. For example, the U.S. Census Bureau set the date just a few months earlier, to June 18 or June 19, 1999. These numbers are estimates, after all.

Human population is still growing, and, in fact, it’s growing slightly faster than experts a few years ago thought it would. Driven by growth in developing countries, population is now expected to reach around 8.5 billion in 2030, 9.7 billion in 2050, and 10.9 billion in 2100. These numbers represent a mid-range. Some projections are higher or lower.

These estimates come from the UN report World Population Prospects 2019.

According to a June 17, 2019, article by the Pew Research Center, Earth’s human population growth is projected to nearly stop growing by the end of this century. The article explains:

For the first time in modern history, the world’s population is expected to virtually stop growing by the end of this century, due in large part to falling global fertility rates, according to a Pew Research Center analysis of new data from the United Nations.

Pew has also provided 11 key takeaways from the UN’s World Population Prospects 2019. We list the highlights here. Go to Pew’s page to read more about each of the takeaways listed here:

3. Africa is the only world region projected to have strong population growth for the rest of this century.

4. Europe and Latin America are both expected to have declining populations by 2100.

6. In the Northern America region, migration from the rest of the world is expected to be the primary driver of continued population growth.

8. India is projected to surpass China as the world’s most populous country by 2027.

11. The Latin America and Caribbean region is expected to have the oldest population of any world region by 2100, a reversal from the 20th century.

Read more, and find lots more charts and graphs, via the Pew Research Center: World’s population is projected to nearly stop growing by the end of the century