Are these termite-inspired robots the construction crews of the future?

A collective robotic intelligence can be created to build large structures using simple rules programmed in a swarm of robots.

Inspired by termite mounds in Namibia, scientists and engineers at Harvard University have created a team of small robots, dubbed TERMES robots. These robots build remarkably complex structures without the need for oversight, organization or communication between robots. They’re designed to observe and respond to changes made by other robots. It’s a system called stigmergy. Results of this 4-year project were published in the February 14, 2014, issue of Science.

Termites are what inspired this whole research topic for us. We learned the incredible things these tiny insects can build and said: Fantastic. Now how do we create and program robots that work in similar ways but build what humans want?

The scientists described the TERMES system as an important proof of concept for scalable, distributed artificial intelligence. Commented Werfel,

When many agents get together—whether they’re termites, bees, or robots—often some interesting, higher-level behavior emerges that you wouldn’t predict from looking at the components by themselves. Broadly speaking, we’re interested in connecting what happens at the low level, with individual agent rules, to these emergent outcomes.

Conventional robotic systems follow instructions from one overseer that directs operations. Other robot-driven projects rely on frequent communications between robots to coordinate activities. These strategies are useful in terms of efficiency and faster troubleshooting. But for large operations, especially in isolated places and in hazardous conditions, this becomes increasingly complex. Moreover, failure at the top level would be catastrophic for a construction project. 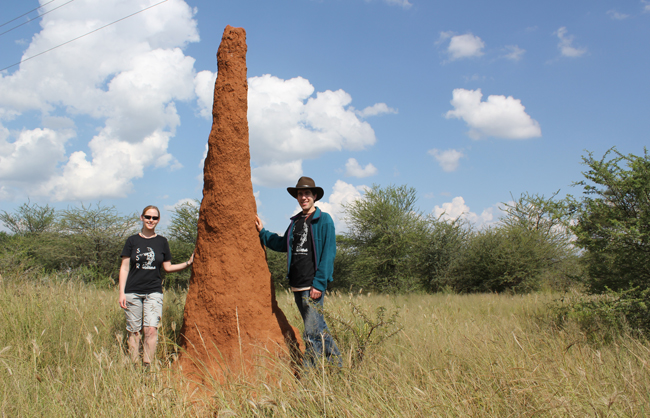 Normally, at the beginning, you have a blueprint and a detailed plan of how to execute it, and the foreman goes out and directs his crew, supervising them as they do it. In insect colonies, it’s not as if the queen is giving them all individual instructions. Each termite doesn’t know what the others are doing or what the current overall state of the mound is.

The TERMES robots act as a colony to build castles, pyramids and towers out of foam bricks, even building stairs to reach higher parts of their constructions. They work in parallel, without knowing what the other is doing at that same time. If one robot left, there is no disruption to the construction process. 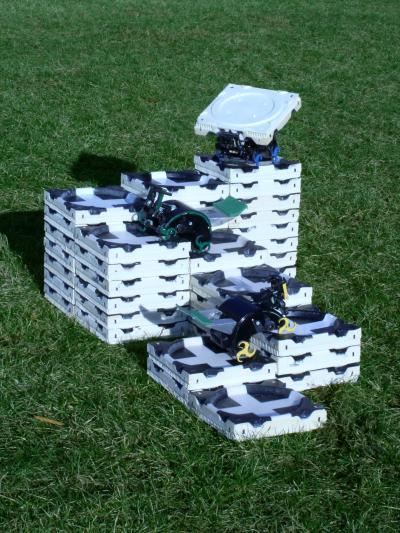 How do they do it? A simple set of rules are created to drive a specific design. Each robot follows those rules on where to lay a brick, how to manuever around, how to climb a structure. Werfel explained further:

There are two kinds of rules. The rules that are the same for any structure the robots build, and the ‘traffic laws’ that correspond to the specific structure. The [traffic laws] tell robots at any site which sites they’re allowed to go to next: traffic can only flow in one direction between any two adjacent sites, which keeps a flow of robots and material moving through the structure.

If they built carelessly, it would be easy for them to build in a way where they got stuck. The safety checks involve a robot looking at the sites immediately around itself, paying attention to where the bricks already are and where others are supposed to be, and making sure certain conditions in that local area are satisfied.

Kirstin Petersen, a co-author on the paper, led the design and construction of the TERMES robots and bricks used for construction. Each robot, following algorithms that executed their actions, used just four sensors and three actuators for construction activities such as carrying the foam bricks, laying it down, and even climbing up structures. She commented,

We co-designed robots and bricks in an effort to make the system as minimalist and reliable as possible. Not only does this help to make the system more robust; it also greatly simplifies the amount of computing required of the onboard processor. The idea is not just to reduce the number of small-scale errors, but more so to detect and correct them before they propagate into errors that can be fatal to the entire system. 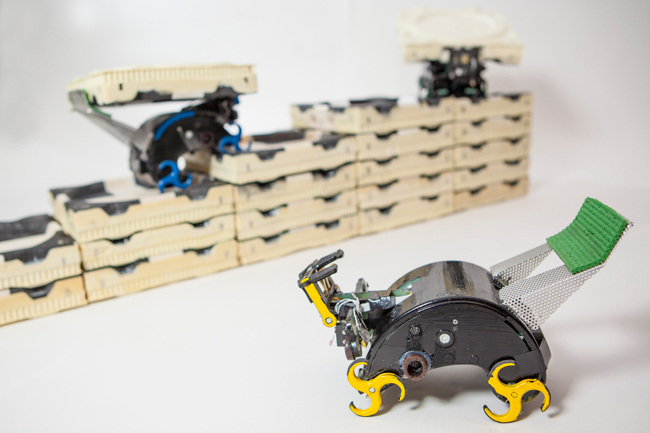 This concept could someday be applied to robotic tasks such as assembling sandbags before a flood, even utilized for simple construction projects for future Mars colonists. Said Werfel,

A long-term vision is for robot teams like this to build full-scale structures for human use, maybe with particular utility in settings where it’s difficult or dangerous for humans to work (e.g., building shelters after an earthquake or habitats underwater or on other planets). While that’s likely a long way out, a shorter-term application could be something like building levees out of sandbags for flood protection.

It may be that in the end you want something in between the centralized and the decentralized system—but we’ve proven the extreme end of the scale: that it could be just like the termites. And from the termites’ point of view, it’s working out great.

Bottom line:
Scientists have created a system of robots that independently use simple rules, without any top level direction or inter-robot communication, to create complex structures. They’re mimicking what’s already done in nature, like termites constructing large mounds. Results of the 4-year project, called TERMES, were published in the Feb 14 2014 issue of Science.