Researchers concluded that even a contained nuclear conflict would take a toll on Earth’s oceans and potentially disrupt the human food web. “The impacts are huge,” a scientist said. 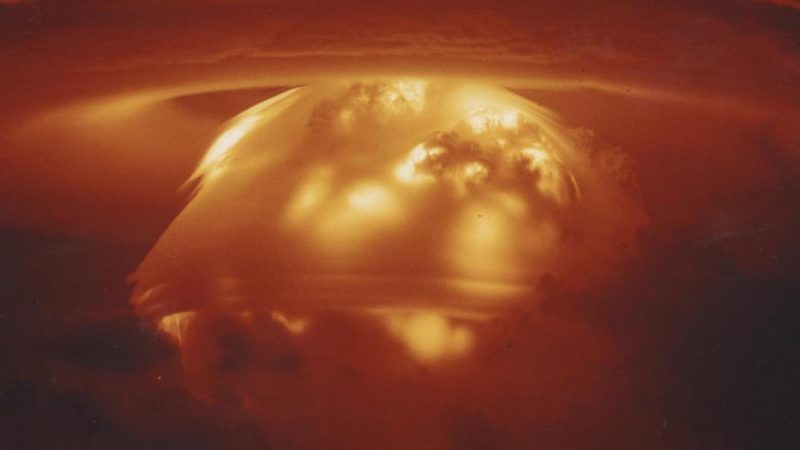 A mushroom cloud erupts during the Castle Bravo nuclear weapon test at Bikini Atoll in 1954. Image via U.S. Department of Energy/ University of Colorado Boulder.

You’ve likely heard of nuclear winter, a hypothesis explored by decades of scientific research. It’s the idea that – following the firestorms produced in an all-out nuclear war – the soot lifted into Earth’s stratosphere would cause serious cooling, and subsequent crop failures and famines. Now a new study has looked at how even a relatively contained nuclear conflict – for example, a hypothetical war between India and Pakistan – might shift the chemistry of Earth’s oceans. The reasoning is reminiscent of that behind nuclear winter: soot lifted into the atmosphere would cause cooling. In the new study, the researchers concluded that even a contained conflict would “take a toll” on the oceans and potentially disrupt the human food web.

Nicole Lovenduski of University of Colorado Boulder (CU Boulder) led the study. She commented in a statement:

The impacts are huge.

These researchers used global climate models to conduct their simulations. They looked at four possible nuclear conflicts, including three in India/Pakistan of differing magnitudes (5 teragrams, 27 teragrams, and 47 teragrams of soot produced, respectively; a teragram is equal to one trillion grams or 1,000 kilotons), and one all-out U.S./Russia case with 150 teragrams of soot produced. Writing at LaboratoryEquipment.com, Michelle Taylor penned a succinct explanation of what would happen in even the “tamest” of the India-Pakistan simulations. She wrote:

Soon after denotation and no longer than one year later, global climate models showed the acidity of the world’s oceans would likely dip. Years later, the world’s salt water would begin to suck up more carbon dioxide from the air. Supplies of carbonate in the oceans would shrink, removing the key ingredient that corals use to maintain their reefs and oysters use to sustain their shells.

Lovenduski told Taylor that – beyond taking a toll on crustaceans – a major disruption of the oceanic food web would undoubtedly severely impact the human food chain. Taylor wrote:

That’s because there are more than 3 billion people in the world today who depend on ocean fisheries for protein and/or income.

The shell of an ocean pterapod dissolves when exposed to acidic conditions in a lab. Image via NOAA/ CU Boulder.

Brian Toon, also of CU Boulder, was a co-author on the study. He commented in the team’s statement:

This result is one that no one expected. In fact, few people have previously considered the impact of a nuclear conflict on the ocean.

It makes me question whether organisms could adapt to such a change. We’re already questioning whether they can adapt to the relatively slower process of man-made ocean acidification, and this would happen much more abruptly.

Lovenduski said it’s too soon to say for sure what the fate of shelled creatures in the oceans would be if nuclear war broke out. She said she hopes that her group’s findings will bring more attention to the wide-ranging devastation that would follow even a limited nuclear exchange. There’s no such thing, she said, as a minor nuclear war, adding:

I hope this study helps us to gain perspective on the fact that even a small-scale nuclear war could have global ramifications. 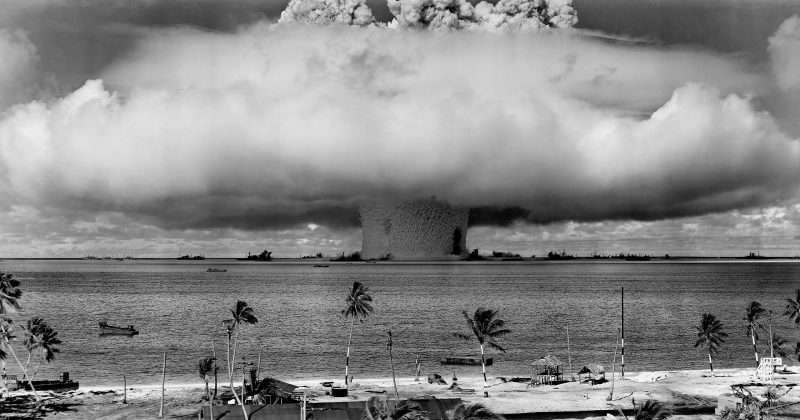 A U.S. Army nuclear test at Bikini Atoll, Micronesia, on July 25, 1946. The wider, exterior cloud is a condensation cloud, not a classic mushroom cloud. Read more about this image. A new study shows that even a limited nuclear conflict could have damaging effects on Earth’s oceans. The bombs would not have to explode over the ocean for the effects to take place. Image via Wikimedia Commons.

Source: The Potential Impact of Nuclear Conflict on Ocean Acidification