EarthSky is joining the grassroots effort to #ShutDownSTEM and #Strike4BlackLives on Wednesday, June 10. Thousands of researchers around the world have pledged to pause their work on Wednesday to support the ongoing Black Lives Matter movement and efforts against racism in the scientific community and society at large. 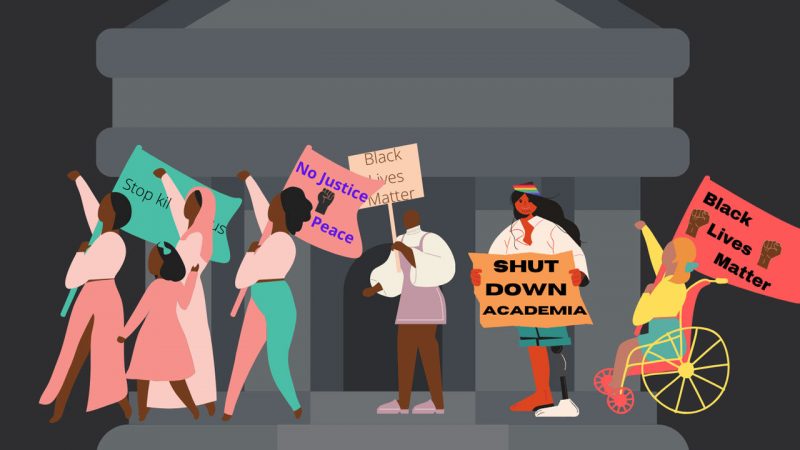 Image via ScienceMag.org, a publication of the American Association for the Advancement of Science, which has also endorsed the strike.

Thousands of physicists, astronomers, and other academics have pledged to pause their work – forgoing research, classes, meetings, and other normal business – on Wednesday, June 10, 2020, in order to pursue a day of action dedicated to protecting the lives of Black people. The strike is taking place due to the efforts of multiple organizers operating under banners including the Strike For Black Lives, #ShutDownSTEM, #ShutDownAcademia and #Strike4BlackLives. A group of 15 physicist organizers wrote on the website Particles for Justice that the Strike for Black Lives is needed to:

… hit pause, to give Black academics a break and to give others an opportunity to reflect on their own complicity in anti-Black racism in academia and their local and global communities.

Chanda Prescod-Weinstein, a particle cosmology theorist and feminist theorist at the University of New Hampshire, said:

I want non-Black people to respond as if lives depend on it because they do.

In the wake of the most recent murders of Black people in the U.S., it is clear that white and other non-Black people have to step up and do the work to eradicate anti-Black racism. As members of the global academic and STEM [science, technology, engineering, and math] communities, we have an enormous ethical obligation to stop doing ‘business as usual.’

From Nature: Thousands of scientists worldwide to go on strike for Black lives

From the American Institute of Physics: Scientists to Strike for Black Lives, #ShutDownSTEM on June 10

Bottom line: University laboratories, scientific societies, technical journals, and others have pledged to strike on June 10, 2020. The focus is on issues of racial equality and inclusiveness. The strike is taking place under multiple banners including the Strike For Black Lives, #ShutDownSTEM, #ShutDownAcademia, and #Strike4BlackLives. EarthSky is joining the strike.