Human history in your face

When you look in a mirror, the face you see is the result of millions of years of human evolution. Here’s an interview with an expert discussing how and why our modern human faces evolved to look as they do today.

How and why did the human face evolve to look as it does today? Why do our faces and expressions look different – and yet eerily similar – to those of, for example, chimps? Two years ago, a group of leading human evolution experts gathered at a conference in Madrid, Spain, to discuss the evolutionary roots of the modern human face. Their detailed account of its 4 million year history was published April 15, 2019, in the peer-reviewed journal Nature Ecology and Evolution. Rodrigo Lacruz, associate professor of basic science and craniofacial biology at New York University’s College of Dentistry, spearheaded the meeting of experts two years ago and is lead author on the new paper. His interview with NYU News follows.

Beneath the skin and muscles that form our smirks and scowls are 14 different bones that house parts of the digestive, respiratory, visual, and olfactory systems – enabling us to sniffle, chew, blink, and much more. Thanks to the discovery of fossils, researchers are able to observe how faces have evolved over time, from extinct hominin species walking the Earth millions of years ago, to Neanderthals, to the only remaining hominin species – Homo sapiens, or humans. Analyzing the visages of our ancestors provides clues about why our faces have grown shorter and flatter over millennia. Which environmental and cultural factors influenced the structure of our modern faces, and how might climate change reshape them yet again?

NYU News: How does the human face differ from that of our predecessors – and our closest living relatives?

Lacruz: In broad terms, our faces are positioned below the forehead, and lack the forward projection that many of our fossil relatives had. We also have less prominent brow ridges, and our facial skeletons have more topography. Compared to our closest living relatives, the chimpanzees, our faces are more retracted and are integrated within the skull rather than being sort of pushed in front of it.

NYU News: How has our diet played a role?

Lacruz: Diet has been considered as an important factor, especially when it comes to the mechanical properties of foods consumed – soft versus hard objects. For instance, some early hominins had bony structures that suggested the presence of powerful muscles for mastication, or chewing, and they had very large chewing teeth, indicating that they were likely adapted for processing harder objects. These fossils had unusually flat faces. In more recent humans, the transition from being hunter-gatherers to settlers also coincides with changes in the face, specifically the face becoming smaller. However, many of the details of this interaction between diet and facial shape are unclear because diet affects certain parts of the face more than others. This reflects how modular the face is.

Lacruz: We think that enhanced social communication was a likely outcome of the face becoming smaller, less robust, and with a less pronounced brow. This would have enabled more subtle gestures and hence enhanced non-verbal communication. Let’s consider chimpanzees, for example, which have a smaller repertoire of facial expressions compared to us, and a very different facial shape. The human face, as it evolved, likely gained other gestural components. Whether social communication by itself was the driver for facial evolution is much less likely.

NYU News: Climate also plays a role in evolution. How have factors like temperature and humidity influenced the evolution of the face?

Lacruz: We see that perhaps more clearly in Neanderthals, which adapted to live in colder climates and had large nasal cavities. This would have enabled an increased capacity for warming and humidifying the air they inhaled. The expansion of the nasal cavity modified their faces by pushing them somewhat forward, which is more evident in the midface (around and below the nose). The likely ancestors of the Neanderthals, a group of fossils from the Sima de los Huesos site in Spain that also lived in somewhat colder conditions, also showed some expansion of the nasal cavity and a midface that jutted forward. While temperature and humidity affect the parts of the face involved in breathing, other areas of the face may be less impacted by climate.

NYU News: In the Nature article, you mention that climate change could affect human physiology. How could a warming planet change our faces?

Lacruz: The nasal cavity and upper respiratory tract (the area at the back of the nose near the pharynx) influence the shape of the face. Part of this knowledge derives from studies in modern people by some of our collaborators. They have shown that the shape of the nasal cavity and nasopharynx differ between people living cold and dry climates and those in hot and humid climates. After all, the nose helps warm and humidify inhaled air before it reaches the lungs.

The expected rise in global temperatures could have an effect on human physiology – specifically, how we breathe – over time. The extent of these changes in the face will depend, among other things, on how much warmer it grows. But if predictions of a 4 degrees C (about 7 F) rise in temperatures are correct, changes in the nasal cavity might be anticipated. In these scenarios, we should also take into account the high mobility of gene flow, which is an important factor as well, so the effects of climate change can be difficult to predict. 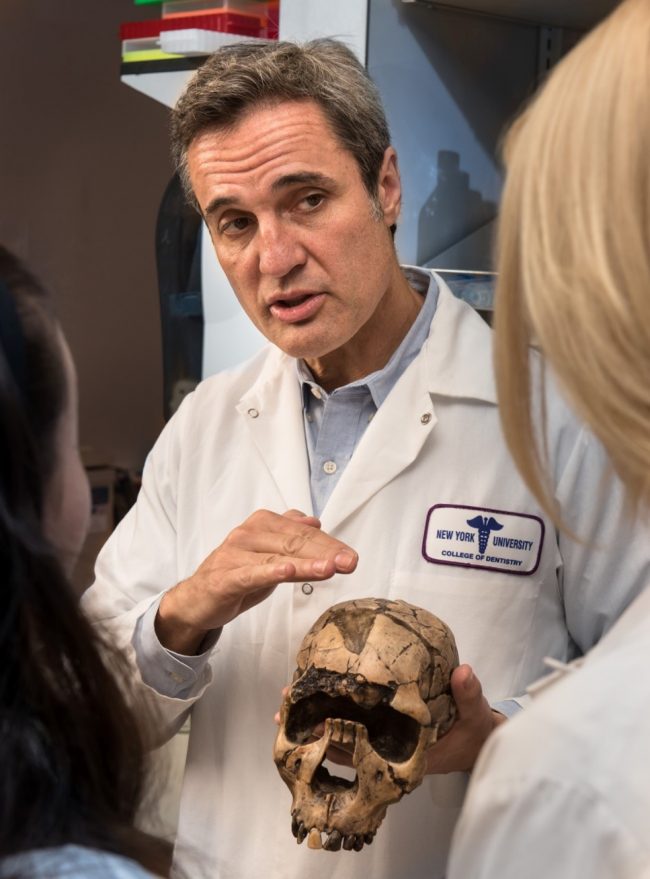 NYU Dentistry’s Rodrigo Lacruz. He spearheaded a gathering of experts in human evolution to trace the history of the human face, and explain how and why it evolved to look as it does today.

Bottom line: Interview with Rodrigo Lacruz of New York University on how the modern human face evolved to look as it does today.

Source: The evolutionary history of the human face