How did humans first reach America?

A new study suggests that the first people to reach America travelled via the Pacific coast rather than through a corridor between two giant ice sheets.

By Suzanne McGowan, University of Nottingham

Modern humans started spreading from Africa to Europe, Asia and Australia some 100,000 years ago – a process that took about 70,000 years. We also know that at some point in the past 25,000 years, a group managed to reach America from Siberia at the end of the last ice age.

However, exactly when this occurred and which route these early pioneers took has long been debated. Now new research based on ancient DNA and plant remains from lake deposits, published in Nature, is finally helping us to answer these questions. 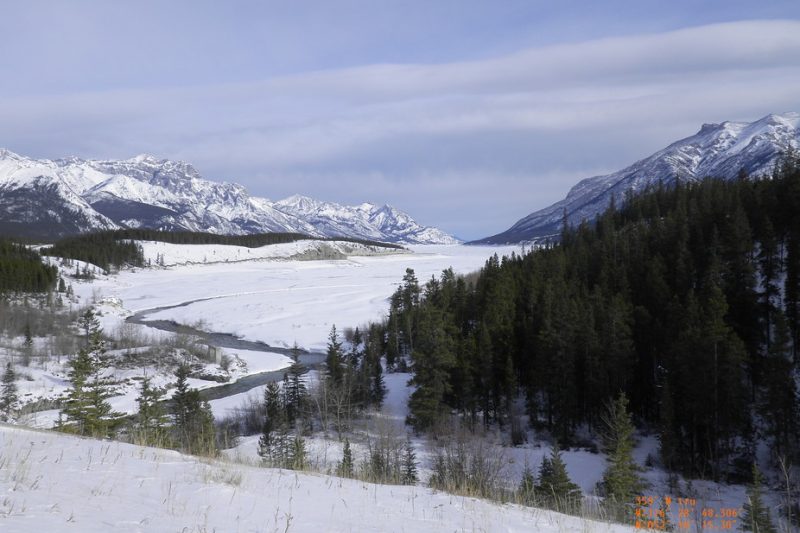 New research challenges a previous view that humans got to America via this area, where an ice-free corridor existed during the last ice age. Image via Mikkel Winther Pedersen

The study investigated a 1,500km long strip of land that was an “ice-free corridor: during the ice age, located in the British Colombia-Alberta region of Canada. For many years, scientists considered this region to be the only place where the two vast ice sheets which covered most of Canada during the last ice age did not meet. Theories of human migration therefore suggested that the earliest migrants from Siberia travelled across the Bering land bridge, exposed at that time due to lower sea levels, through Alaska, and down this open corridor, colonising North America after this time.

However, as new evidence has accumulated, scientists have started to question whether this is plausible. Radiocarbon dating, which is notoriously tricky to interpret, suggests that the ice sheets did in fact meet to make the corridor impassable for a period lasting from around 23,000 years ago until around 14-15,000 years ago. What’s more, new archaeological discoveries have revealed that the earliest human remains from America date back to 14,700 years ago – and they were discovered thousands of kilometres to the south in Chile. To get all the way to Chile by this time, these people must have arrived in the Americas much earlier – when it was impossible to pass through the ice.

The distribution of the early archaeological remains across North America also do not cluster around the ice-free corridor area, suggesting there was no progressive southward movement of humans.

The study looked at the past environmental conditions in the corridor. If it was indeed a migration pathway for humans, it must have supported the plants and animals that humans require to survive. Archaeological evidence from other areas show that early North Americans hunted large animals such as bison and mammoth, as well as fish and waterfowl during the later stages of the ice age. 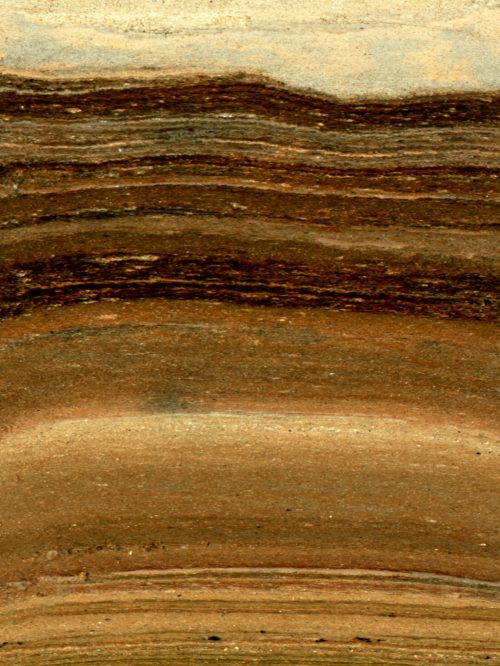 Lake sediments can help shed light on the plant and animal life of this period because the successive layers of sediment allow us to step back in time to reveal a history of past environments. The researchers recovered sediment cores dating back to almost 13,000 years ago from an area of the corridor which is thought to be the last to become ice-free. Identification of the pollen grains and small fragments of plants in sediments are important in revealing vegetation development.

Lake sediments encapsulate a cocktail of partially decomposed compounds and organic remains, including DNA from the tissues and excretions of organisms – leaving a unique marker of their presence. As it gets older, the DNA breaks down into small fragments, increasing the challenge of isolating messages. The researchers used “shotgun sequencing” which screens the entire DNA cocktail to look for matches with known DNA databases.

These analyses show that around 12,900 years ago, a large lake covered this area, formed by glacial meltwaters. The surrounding vegetation was very sparse, comprising a few grasses and herbs. Around 12,700 years ago, steppe (known as prairie in North America) developed – with sagebrush, birch and willow. These enabled bison to roam the area by 12,600 years ago, followed by small mammals, mammoth, elk and bald eagles by 12,400 years ago.

The authors therefore argue that the corridor only became a viable passage for human travel around 12,700 years ago, meaning it couldn’t have been the first migration route into America. Instead, it became an alternative route slightly later on.

So where did the first humans enter the Americas? The currently favored theory is that humans migrated via the Bering land bridge along the western Pacific coastline at a time when sea levels were lower, exposing an ice-free coastline for travel with the possibility for transport over water. The so-called “Kelp Highway Hypothesis” also suggests that marine resources were very abundant at this time, and easily capable of supporting migrant populations. Archaeologists have so far struggled to investigate this hypothesis thoroughly, however, because most remains are submerged under seas which are now around 120 meters (394 feet) higher than they were during the ice-age. 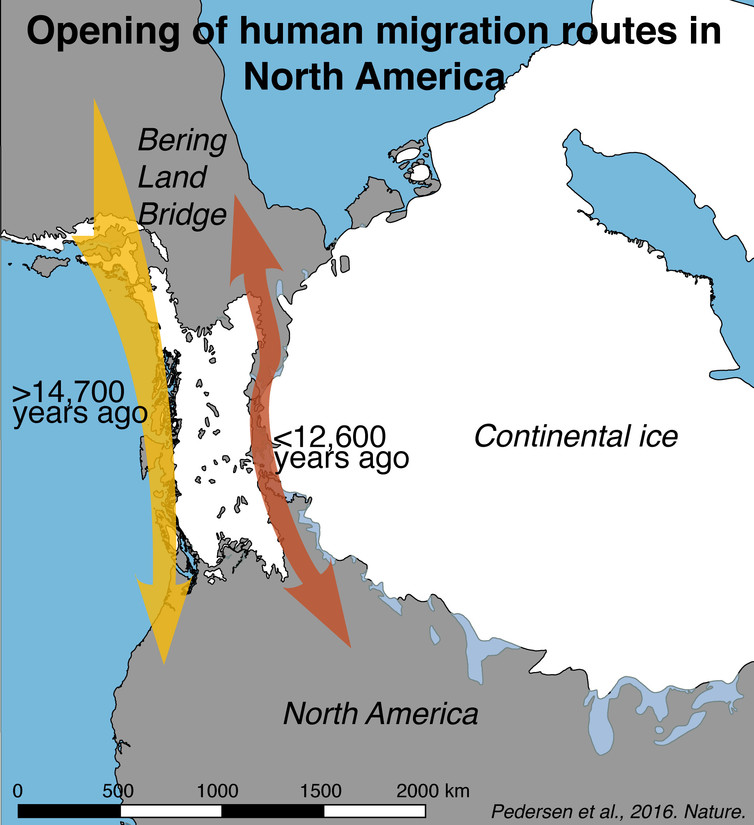 Map outlining the opening of the human migration routes in North America revealed by the results presented in this study. Image via Mikkel Winther Pedersen

The study has implications for later groups of Americans including the “Clovis people” who existed between 13,400-12,800 years ago. The new data suggests these people may not have had much use of the corridor either – the steppe didn’t develop until about 12,700 years ago. However, this is controversial because another very recent genetic analysis from bison in the area suggests these animals were roaming the corridor around 13,400 years ago – making it viable for humans.

The best way to tackle these conflicting strands of evidence would be to commission further studies incorporating palaeontology, archaeology and palaeoenvironmental work to resolve the question.

Bottom line: A new study suggests that the first people to reach America travelled via the Pacific coast rather than through a corridor between two giant ice sheets.