One of our greatest astronomers, Galileo Galilei, was born February 15, 1564. His discoveries with the improved telescopes he made changed the way we view the universe – and got him in trouble with the church. 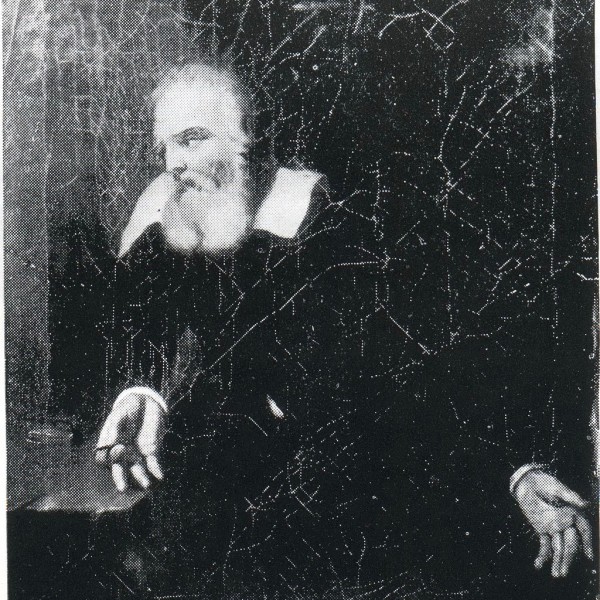 Portrait, attributed to Murillo, of Galileo gazing at the words “E pur si muove” (“And yet it moves;” not legible in this image) scratched on the wall of his prison cell. Image via Wikimedia Commons.

Happy birthday to Italian astronomer, mathematician, and physicist Galileo Galilei, born on February 15, 1564. Galileo was one of the first to aim a telescope at the night sky, where he saw phases of Venus and four dots of light orbiting Jupiter (now known as Jupiter’s famous Galilean moons). These and other observations began to change the way we saw the universe and our place in it.

In Galileo’s time, educated people subscribed to the Aristotelian view that Earth lay fixed in the center of a more or less unchanging universe. So his discovery of moons orbiting Jupiter (now known as the Galilean satellites in his honor) and Venus’s phases resulting from the planet orbiting the sun were considered heresy by the Roman Inquisition. In 1633, these tribunals – which had been developed by the Holy See of the Roman Catholic Church – forced Galileo to recant.

As he left the courtroom, he is famously said to have muttered:

E pur si muove (and yet it moves).

And so it does. Earth moves, and all objects in space move. The phrase is still used today as a retort, implying it doesn’t matter what you believe; these are the facts.

Galileo spent the rest of his life under house arrest, but that did not stop him from publishing another work, Two New Sciences, about mechanics and motion.

Galileo grew up in a musical family. In 1574, the family moved to Florence, where 18-year-old Galileo began his education in a monastery. He was very successful in his studies and began studying medicine at the University of Pisa. Due to financial problems, he was unable to finish his degree, but his years at the university were priceless. They introduced him to mathematics and physics, but most importantly, they introduced him to Aristotle’s philosophy.

Back then, if somebody wished to know about the universe, the way to do it was to read Aristotle’s works. As Dante had put it some centuries before, Aristotle is “the Master of those who know” (Dante, Inferno 4.131). In other words, at that time, knowledge was to philosophy what faith was to religion.

And so, in spite of not being able to complete his degree in medicine and become a university professor, Galileo still continued his studies of mathematics. He was able to get a few minor teaching positions for a living. After two years of hard work, he published “La Bilancetta” (The Little Balance), his first scientific book, which gained him a reputation. The book commented upon the story of how the king of Syracuse asked Archimedes to verify whether his crown was made of pure gold or a lower-value mix of metals. Galileo presented an invention of his, the “little balance,” today called “hydrostatic balance,” that is used to make more accurate measurements of differences in density.

Read here about the King’s crown and Archimedes’ other discoveries.

Galileo’s reputation was bruised after the publication of his “Du Motu” (On Motion), a study of falling objects, which showed his disagreement with the Aristotelian view about the subject.

In 1609, he heard that in the Netherlands, an instrument had been invented that showed distant objects as if they were close by. Like many others, Galileo quickly figured out the mechanics of the spyglass, but later on he greatly improved the original design. He presented the Venetian State with an eight-powered telescope, a telescope that magnifies normal vision by eight times. His telescope earned him a doubling of his salary and a life tenure at Padua University.

Over the years, Galileo improved his telescope to magnify up to 20 times.

One of Galileo’s telescopes. Image via the University of Oregon.

With his telescope, he made many astronomical discoveries. For example, he was the first to view the moon magnified 20 times. He drew the moon’s surface, showing that its surface is bumpy and rocky, contrary to the popular belief of the time that the moon was smooth.

In January 1610, he discovered the four most massive moons of Jupiter: Io, Europa, Ganymede, and Callisto. Today, they are referred to as the Galilean moons. He laid out all of his findings in his book “Sidereus Nuncius” (The Starry Messenger).

Galileo observed that Venus went through phases, just as the moon does.

Composite image showing spacecraft views of the four largest moons of Jupiter. Known as the Galilean satellites, they were first seen by the Italian astronomer Galileo Galilei in 1610. Shown from left to right in order of increasing distance from Jupiter. Io is closest, followed by Europa, Ganymede and Callisto. Image via NASA.

Galileo was a respected man by 1610, but his increasingly public acceptance of the heliocentric system began to cause him trouble with the Roman Catholic Church.

In 1618, Galileo was dragged into a controversy about the nature of comets, which was of no help to his social position. Galileo nevertheless published the argument under his own name in “Il Saggitore” (The Assayer) in 1623, which is to this day one of his best-known pieces of work.

Read selections from “The Assayer.”

Things didn’t get much better for Galileo before his death in 1642. His work kept defying the accepted Aristotelian view and earned him the anger of the Roman Catholic Church, which had founded a group of institutions within the Church’s judicial system – known as the Inquisition – whose whose aim was to combat heresy.

In particular his 1632 publication of his “Dialogue Concerning the Two Chief World Systems, Copernican and Ptolemaic” opposed the Aristotelian view. In 1633, the Inquisition summoned Galileo to Rome. He was declared a suspect of heresy, was punished by life imprisonment, and was made to abjure formally. Nevertheless, he lived comfortably and was allowed to continue his work.

Galileo’s daughter, Sister Maria Celeste, was a nun in the Catholic Church. They regularly wrote each other letters, and she saved the letters Galileo wrote her, which were eventually published in a book in 1999 by Dava Sobel called Galileo’s Daughter.

Despite Galileo’s battles with the church, he was a committed Catholic. He would probably be pleased to know that the Vatican now has its own observatory and some of its fathers are astronomers. But it took until 1992 before the Vatican admitted that Galileo was right in his heliocentric beliefs.

A list of all of Galileo’s discoveries is lengthy. Although Galileo is greatly praised for his various scientific discoveries, he did much more than just push science forward: He also pushed society forward. His life was much more than just a conflict with religion and Aristotelianism. It was a fight against the suppression of the opinion of an emerging scientific minority.

Galileo was one of the first to free science from philosophy. He inspired countless others to pursue the freedom of scientific inquiry. 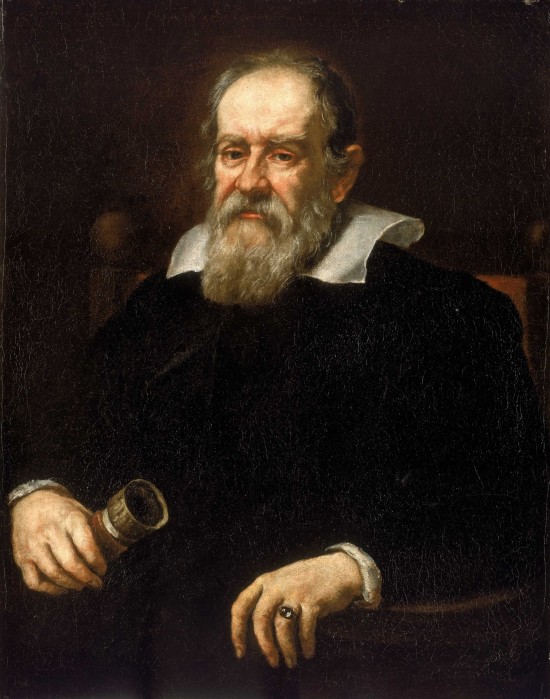 Portrait of Galileo by Justus Sustermans. Image via Wikimedia Commons.

Bottom line: One of our greatest astronomers, Galileo Galilei, was born February 15, 1564. His discoveries with the improved telescopes he made has changed the way we view the universe.