The epidermal electronic system (EES) is like a short-lived tattoo that can conform to the skin in difficult-to-monitor areas like the throat.

An international team of researchers has developed a new type of ultra-thin electronics device that can monitor a person’s heartbeat, brain waves and muscle activity. As soft as skin, it adheres without glue and harvests its own solar power and electromagnetic radiation. A paper describing the epidermal electronic system (EES) device appears in the August 12, 2011 issue of Science. 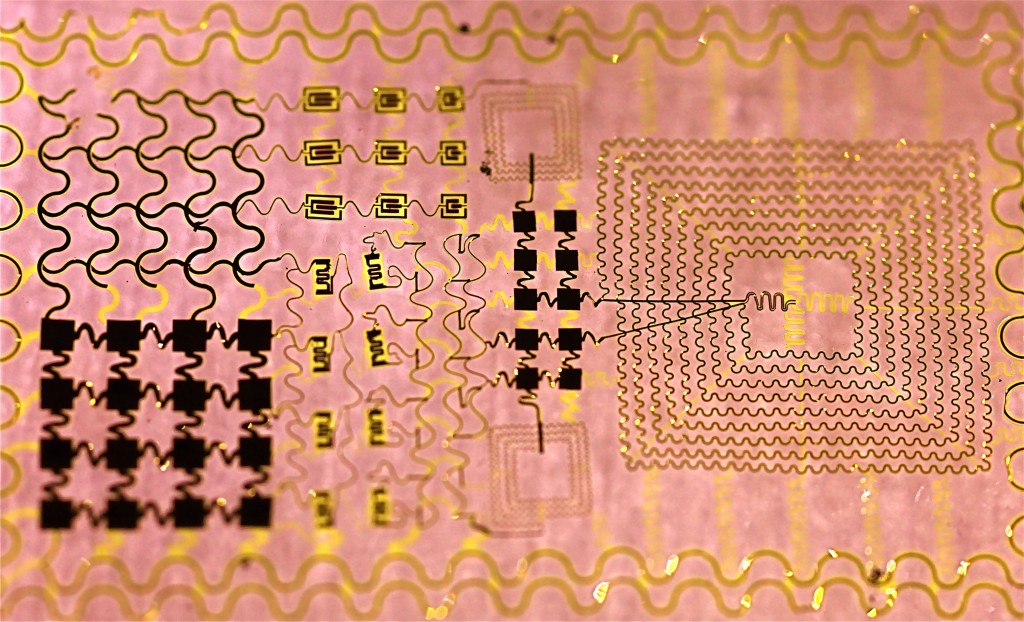 The epidermal electronic system (EES) has tiny solar collectors and can draw power from stray electromagnetic radiation to power its miniature sensors, light-emitting diodes, tiny transmitters and receivers – all part of a network of wire filaments. Image Credit: J. Rogers, University of Illinois

While existing technologies accurately measure heart rate, brain waves and muscle activity, the EES device has almost no weight and no external wires, and requires negligible power. Because of its small power requirements, the device can draw power from stray (or transmitted) electromagnetic radiation through the process of induction and can harvest a portion of its energy requirements from miniature solar collectors.

Within the network of carefully crafted wire filaments are miniature sensors, light-emitting diodes, tiny transmitters and receivers. All of this is contained within a design that is less than 50 microns thick – thinner than the diameter of a human hair – and integrated onto the polyester backing typical of stick-on temporary tattoos. The devices are so thin that close-contact forces called van der Waals interactions make the device adhere at the molecular level, so the electronic tattoos stay in place for hours without glue.

Researchers wanted to ‘blur the distinction between electronics and biological tissues.’ Image Credit: John A. Rogers

The device can last for up to 24 hours under ideal conditions.

The mechanics behind the design for our serpentine-shaped electronics makes the device as soft as the human skin. The design enables brittle, inorganic semiconductors to achieve extremely vast stretchability and flexibility. Plus, the serpentine design is very useful for self-adhesion to any surface without using glues. 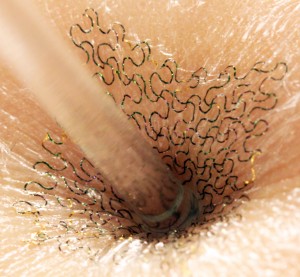 When compressed and pulled, the EES device conforms to the skin, remaining in place. Image Credit: J. Rogers, University of Illinois

While some areas of the body are ill-suited to adhesive electronics, such as the elbow, most regions commonly targeted for medical studies are ideal, including the forehead, extremities and chest.

Regions of the body that have proven difficult to fit with sensors can now be monitored, including the throat, which the researchers studied to observe muscle activity during speech. In an experiment, the researchers used the device to control a voice-activated video game interface with greater than 90 percent accuracy.

This type of device might provide utility for those who suffer from certain diseases of the larynx. It could also form the basis of a sub-vocal communication capability, suitable for covert or other uses.

Undulating wiring enables strength and flexibility, despite the small size. Regions of the body that have proven difficult to fit with sensors can now be monitored, including the throat. Image Credit: J. Rogers, University of Illinois

The researchers are also exploring clinical approaches, particularly for ailments where sensor size is critical, such as sleep apnea and neonatal care. Looking into the future, the researchers see the technology involving microfluidic devices – opening up a new arena of electronic bandages and skin aides that could accelerate wound healing or the treatment of burns and other skin conditions.

This short video shows you how the EES goes on and off the skin, and how flexible it is.

Bottom line: An international team of researchers including Yonggang Huang, Northwestern University, and John Rogers, University of Illinois at Urbana-Champaign, has developed a new type of ultra-thin monitoring device – the epidermal electronic system (EES) – that adheres to the skin without glue. It has applications on areas of the body that have been hard to fit with monitoring devices, such as the throat. A description of the device appears in the August 12, 2011 issue of Science.

Heather Clark is developing a nano tattoo for diabetics