Is the Dyatlov Pass incident solved?

The Dyatlov Pass incident has intrigued people for generations, but a new theory pointing to a slab avalanche as the culprit does a thorough job of explaining how the 9 Russian trekkers died. A new video and more here.

For more than 60 years, the mystery of the Dyatlov Pass incident – in which nine hikers in Russia met a mysterious end in February 1959 – has gone unsolved. How did the nine trekkers die on the snowy slopes of Russia’s Kholat Saykhl, a name that translates to Dead Mountain? Avalanche researchers, with some help from the movie Frozen, think they know the answer.

On January 27, 1959, eight men and two women from the Ural Polytechnical Institute set out for a 190-mile (300-km) skiing expedition. Members of the group were aiming to earn their Grade III skiing certification. The outing was led by Igor Dyatlov, whose name would be linked to the incident and to the pass where the group met their fate.

Due to poor health, one of the 10 turned back early. The other nine never returned. When the trekkers were more than a week overdue, an extensive rescue operation was set in motion. The searchers discovered the campsite and the first of the bodies on February 26, 1959. The last bodies were not recovered until May 4 of that year.

Analysis of the campsite showed the trekkers had cut themselves out of their tent and fled in various stages of undress. Autopsies revealed three died from head and chest trauma while six died of hypothermia. Two bodies were missing their eyes and one body was missing its tongue. Some of the clothing showed evidence of radioactivity.

The searchers found the skiers scattered downhill from the campsite. Some were near the tree line in their underwear around the remains of a fire. Some were found deceased in apparent attempts to return to camp. The last members to be discovered were farther in the woods and down a ravine.

Diaries found at the campsite showed that the group’s last night was February 1, 1959. The trekkers had gotten a bit off course and ended up camping higher on the mountain slope than their original plans, which would have put them about a mile downward by the woods.

The last photograph on the skiers’ camera showed the group cutting into the snow slope to erect their tent. Russian authorities long ago realized that the snow on the mountain obscured the undulating terrain, and the skiers must not have realized that the slope they were setting up camp on was about 30 degrees, the minimum incline needed for avalanches to start. 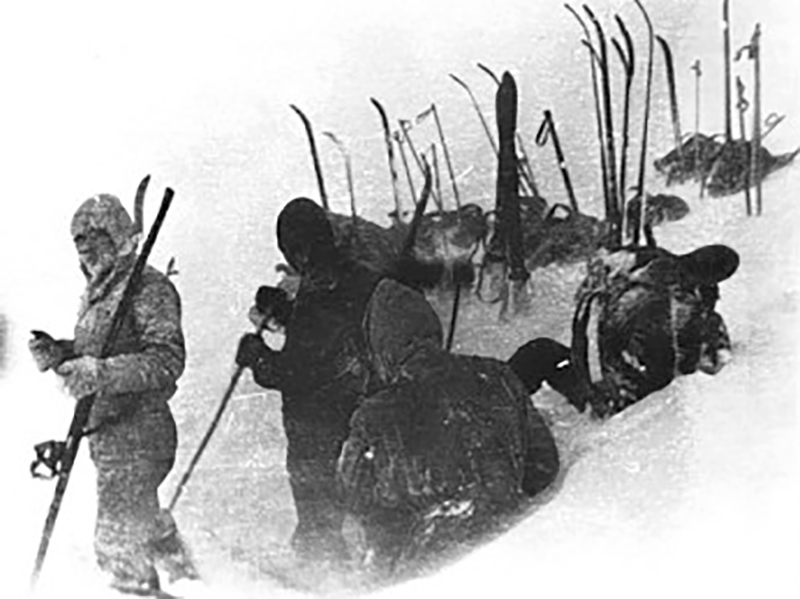 The last known photo of the Dyatlov group showed them cutting into the snow to put up their tent. Image via Dyatlov Memorial Foundation.

Expedition members also might not have realized that the underlying snow layer was loose and slippery, allowing the snowpack on top to slide. The trigger that started a slide was most likely katabatic winds – fierce winds blowing down from a mountain. While the group was sleeping in their tent, these downslope winds must have carried snow from higher up on the mountain to start the avalanche.

Part of the reason the mystery remained was that the search party did not see evidence of a large avalanche. This is where the new theory steps in, which points the finger at a small but strong slab avalanche.

The Disney movie “Frozen” also aided in solving the mystery. The excellent depictions of snow’s movement in “Frozen” propelled Gaume to visit the movie’s animators. By using the animator’s code to simulate an avalanche’s impact on humans along with information from General Motors’ tests of crashes on cadavers, the researchers showed that a block of ice no bigger than an SUV could have caused the resulting injuries when it rammed into the tent. The victims with chest and head injuries survived for a time before succumbing to their wounds, which coincides with what the computer models revealed. 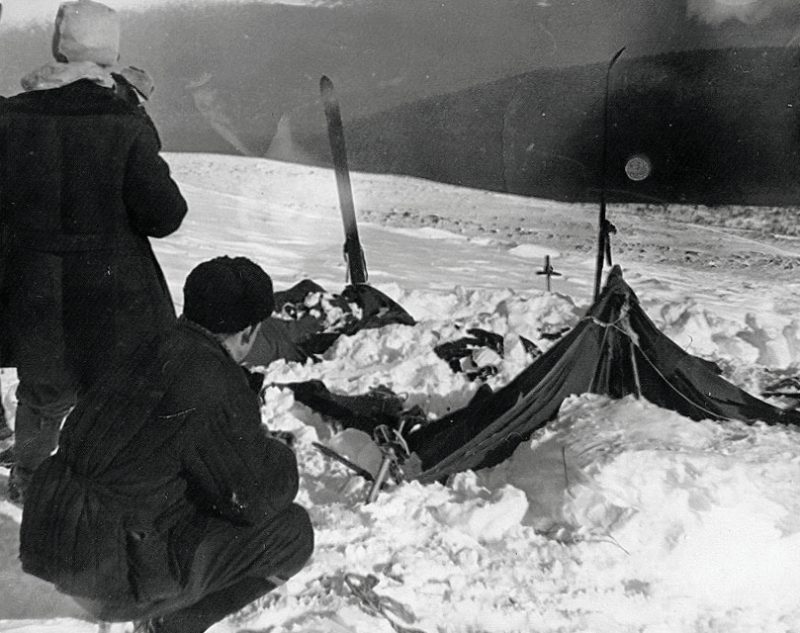 This photo was taken on the day the Dyatlov group’s tent was discovered, February 26, 1959. The tent had been cut open from inside, and most of the skiers had fled in socks or barefoot. Photo taken by Soviet authorities at the camp of the Dyatlov Pass incident and annexed to the legal inquest that investigated the deaths. Image via Wikipedia.

The rest of the strange situation can be explained from events following the avalanche. The various states of undress were probably a result of the victims having been struck by the avalanche while they were out of their skiing clothes and in their sleeping bags, though some could be the result of what is known as paradoxical undressing, when someone dying of hypothermia begins to feel overheated and disrobes.

The missing eyes and tongue would have resulted from scavenging animals, which had plenty of time to find and feed off the bodies that were exposed to the elements for weeks.

The curious radiation found on some clothing can be explained away by the thorium in the gas lanterns found in the tent.

Without surviving witnesses, the mystery can never be 100% solved. Yet the slab avalanche theory comes closest to fully explaining the tragedy at Dyatlov Pass. 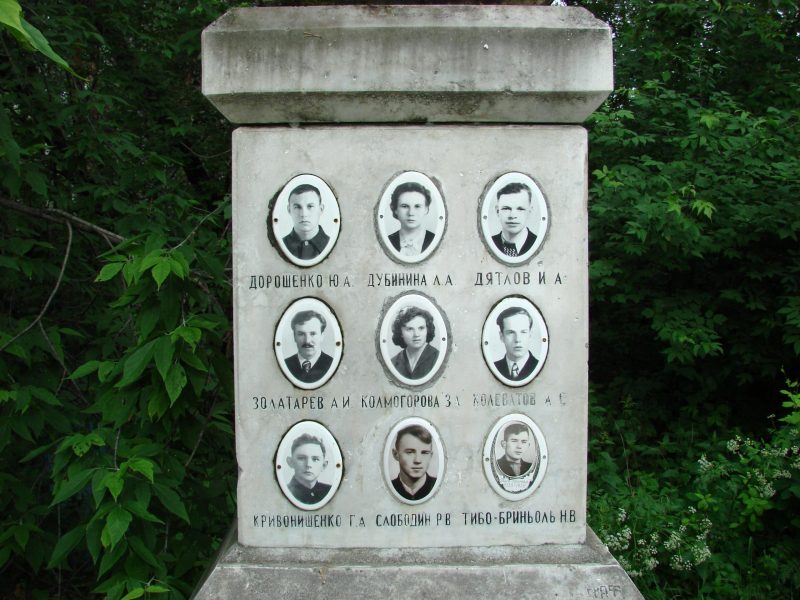 This tomb in Yekaterinburg includes photographs of the victims of the Dyatlov Pass incident. Image via Wikipedia.

Bottom line: The Dyatlov Pass incident has intrigued people for generations, but a new theory points to a slab avalanche as the culprit and does a thorough job of explaining how the nine trekkers died. The theory – from avalanche researchers Alexander Puzrin and Johan Gaume – used computer models to recreate the event, showing that a block of ice no bigger than an SUV could have caused the injuries and the campsite’s disarray.

Source: Mechanisms of slab avalanche release and impact in the Dyatlov Pass incident in 1959