Authenticating the world’s most expensive coffee

Coffee cherries eaten by palm civets create the world’s most expensive coffee. But blatant forgeries use beans that have never seen a civet’s insides.

The most expensive coffee in the world is called kopi luwak.. It fetches as much as $200 per pound, but, due to its high demand and soaringly high price tag, it has been plagued with fraudulent imitations, claiming to be the real thing. For the first time, researchers from Indonesia and Japan have found a way to verify the authenticity of kopi luwak, by identifying a unique chemical fingerprint in the beans, caused by its partial digestion in the gut of a civet. They published their work in summer 2013 in the Journal of Agricultural and Food Chemistry. 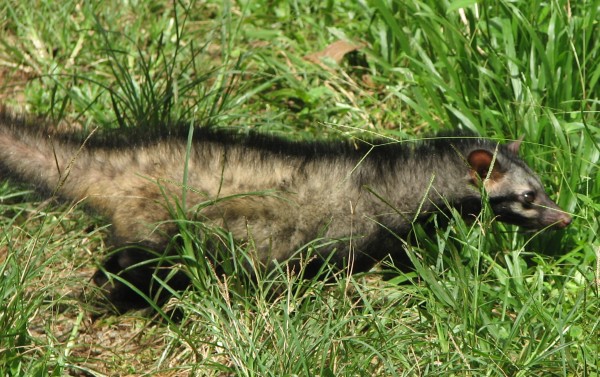 In the Indonesian language, kopi means coffee, and luwak is the local name for the Asian palm civet. Kopi luwak, the most expensive coffee in the world, has a name that squeamishly hints at its origins: coffee cherries eaten by a palm civet spend about a day and a half in the animal’s digestive tract. Then, the beans are, to put it delicately, deposited on the ground, exiting from the civet’s rear. The droppings are collected, beans picked out and thoroughly cleaned, then roasted like conventional coffees. 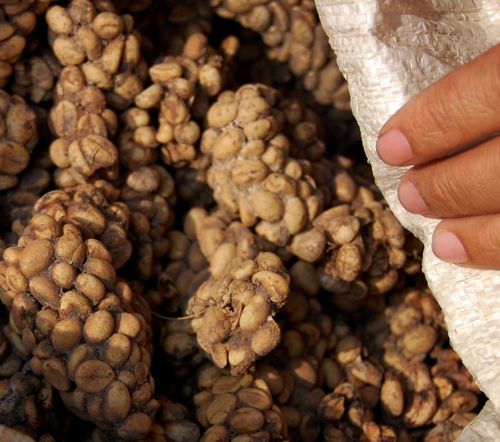 Why on Earth would anyone want to drink kopi luwak? Enthusiasts all over the world, who love it enough to overlook how it’s produced, characterize this rare coffee as sublimely unique. And they’re not imagining it. Kopi luwak‘s unusual flavor is quite real; it has been shown, scientifically, that digestive juices and fermentation in the civet’s gut act on the beans, breaking down protein structures that reduce bitterness. Volatile compounds in coffee, responsible for aroma and flavor, are also altered.

At $80 a cup, coffee brewed using beans harvested from civet feces had better be genuine and good. But reviews are mixed. An online search shows comments ranging from elated wonder to just plain … well, crappy. Perhaps it’s an acquired taste. But kopi luwak fans also blame the bad reviews on cheap imitations. Coffee advertised as kopi luwak has been sold as a blend with cheaper beans. There have also been blatant forgeries using beans that have never seen the insides of a civet.

Kopi luwak is so expensive that it’s sold in small packages for people who wish to sample it. I found a similar-sized package, just 2 oz., online for $50. The seller advertised it as originating from wild, not captive, civets. Image credit: teaandcakes via flickr.com.

Is it possible to obtain definitive verification that particular coffee beans were eaten, then expelled, by a palm civet? In their study published this summer, Udi Jumhawan of Osaka University in Japan and his colleagues described the process that led to the development of the first scientific kopi luwak test. The team analyzed 21 coffee bean samples from different types of coffee to determine levels of certain substances in the samples, including citric and malic acids, that served as chemical fingerprints. Kopi luwak bore its own unique chemical signature, distinguishing it from other types of coffee. The test was even accurate enough to tell if a sample was actually a blend of beans with at least 50% kopi luwak.

Current demand for kopi luwak has created farms in Indonesia, Vietnam, and the Philippines where wild-caught civets are cruelly confined to cages and fed coffee cherries so their droppings can be collected. If a test that detects fake kopi luwak becomes widely available, the demand for authentic products could lead to more inhumane palm civets farms. So, if you’re not turned off by the source and cost of kopi luwak, and would still like to try it, please be careful about where you purchase it. 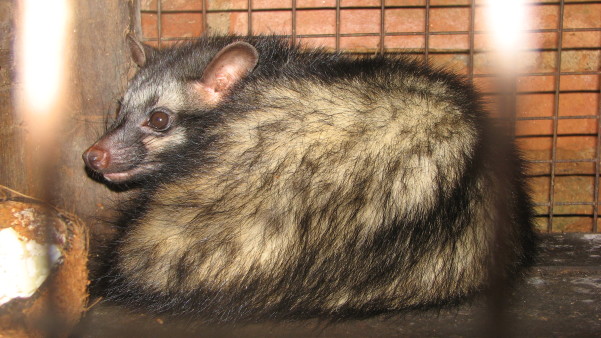 Asian palm civet in a cage. Will the process of authenticating kopi luwak lead to more caged civets? Even if you read labels, disreputable sellers may not tell consumers the true source of their beans. To date, to our knowledge, there is no certification program for luwaks, as there is, for example, for fair-trade coffee or bird-friendly coffee. Image via Praveenp, via Wikimedia Commons.

Kopi luwak beans being roasted at a small farm in Java, Indonesia. The photographer commented that it had a nice smooth taste. Image credit: Stefan Garvander via flickr.com.

Bottom line: Kopi luwak, the most expensive coffee in the world, is made from coffee beans found in the droppings of Asian palm civets. This unusual uniquely-flavored coffee has been difficult to authenticate, resulting in unscrupulous sellers passing off ordinary coffee or kopi luwat blended with cheap beans as the real deal. A new test developed by a team at the University of Osaka may soon put a stop to kopi luwat fraud; they have developed a way to identify unique chemical signatures in kopi luwat that can tell them apart from other types of coffee.