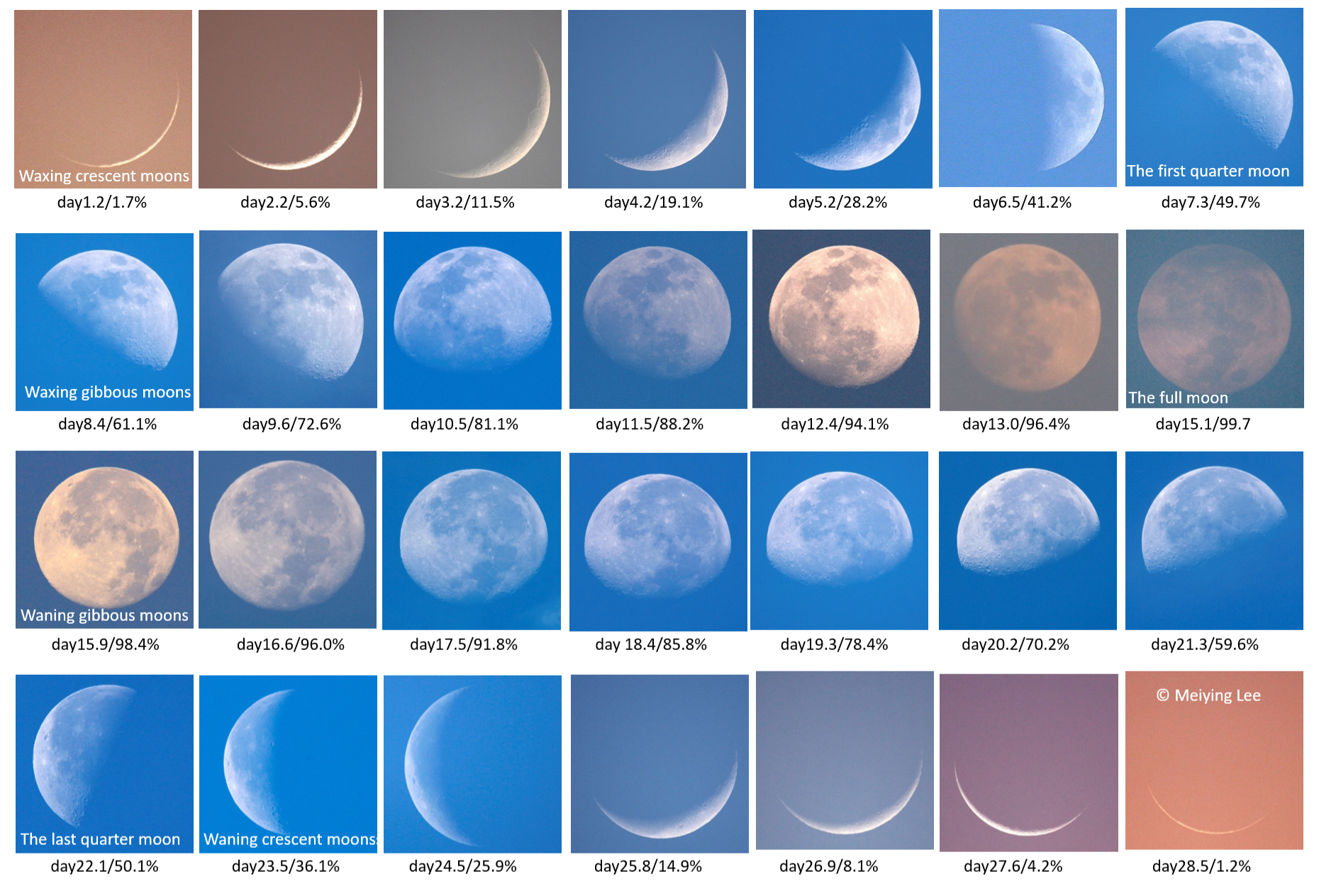 Use PowerPoint to crop 28 moon photos and arrange them together.

Some people think that the moon can only be seen at night. In fact, if you look up at the sky, you will often find that not only the moon can be seen during the day, but the moon during the day is very charming, especially the moon under a clear blue sky.
This combined photo is the daytime moon I collected for nearly 5 years. It contains all the daytime moons of all ages. In addition to the rich and beautiful colors, the most special thing about this photo is that you can see the relationship between the moon and the sky.
The first few pictures in the first row and the last few pictures in the fourth row: The young moons and the old moons are near the sun, so they can only be observed during a short period of time when the sky is still bright around sunset and sunrise. It is pink or off-white with the sun nearby. At dawn, the thin crescent in the pink sky is the biggest motivation for people to get up early and observe, because it is so beautiful.
The last few photos of the second row and the first few photos of the third row: The nearly full moon appears opposite the sun, so I want to see the moon in the daytime only when the moon rises or the moon sets near the horizon. At this time, the sun is on the opposite side, so the sky near the moon appears dim blue-gray. The full moon during the day is the most difficult to observe, because it can only be observed for a short period of time when the moonrise or the moonset is still bright. In the summer, the daytime is longer and there is a chance to observe it. But the weather in the summer afternoon is often bad in Taiwan, so in the past five years I could barely get a picture of the full moon on a misty day (the last one in the second row).
The last few photos of the first row to the first few photos of the second row and the last few photos of the third row to the first few photos of the fourth row: The most dreamy and attractive daytime moon is the moon near the first quarter and last quarter! At this time, the angle of view between the moon and the sun in the sky is about 90 degrees, and the sky is the bluest! So when there is a moon, you will see a bright moon in the blue sky, beautiful and dreamy.
In the photo, you can also see the obvious change in the size of the moon. This is because the moon's orbit is slightly elliptical, and the distance to the earth varies. So the moons appear to be different in size.