The oldest known bird fossil, from the age of dinosaurs, has skull features similar to modern chickens. The scientists who found it have nicknamed it “Wonderchicken.” It’s providing valuable insights into the evolution of birds. 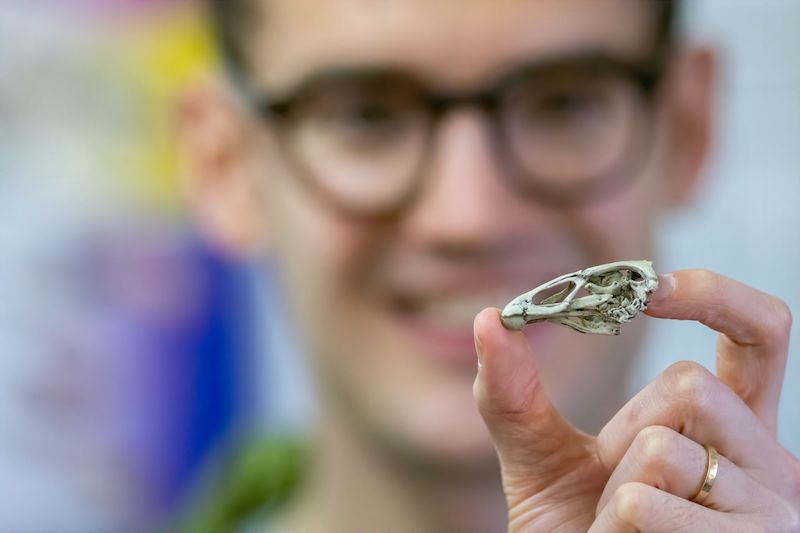 A replica of the Wonderchicken skull, held by Daniel J. Field. Image via Cambridge University.

When Daniel J. Field of Cambridge University and his team ran a CT scan on a small rock with protruding fossil bones, they were in for a big surprise. Resulting images revealed a nearly complete bird skull embedded within the rock. The skull was subsequently found to be 66.7 million years old. It’s now known as the oldest known fossil of a modern bird. It has features characteristic of chicken- and duck-like birds, and could be closely related to the last common ancestor of modern chickens and ducks. Details of their findings were published in the March 18, 2020, issue of the peer-reviewed journal Nature.

The team named the new bird species Asteriornis maastrichtensis, but prefer to call it by its nickname, Wonderchicken.

This ancient bird lived a few hundred thousand years before the great extinction event at the end of the Cretaceous period, 66 million years ago, that led to the demise of dinosaurs.

The fossil skull was found in a limestone quarry in Belgium, near the Dutch border. It was embedded, out of view, within a rock the size of a deck of cards. Initially, the scientists were not that enthusiastic about the rock but decided to do X-ray CT scans to better study what appeared to be bird leg bone fragments on the rock surface. They were amazed to see CT images of an almost complete bird skull, preserved in pristine condition because it had not been exposed to the elements. 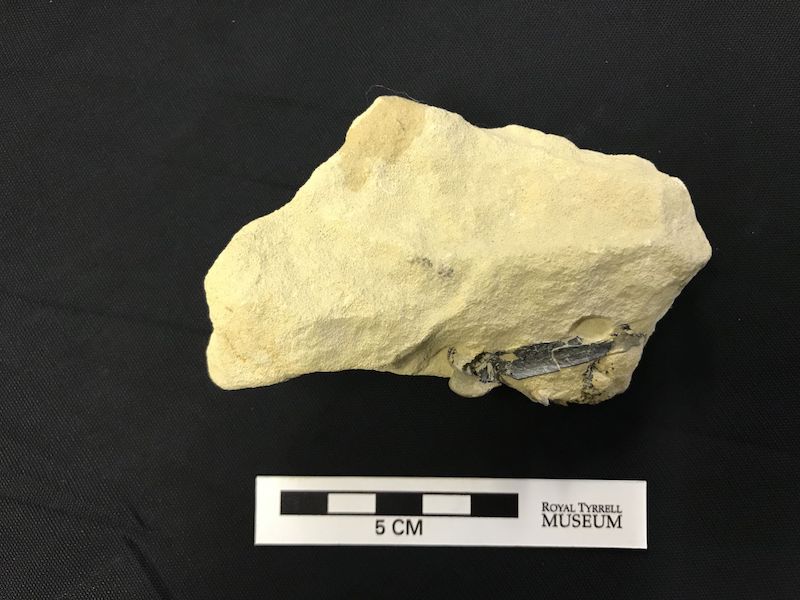 Wonderchicken’s skull was embedded inside this nondescript rock, about the size of a deck of cards. Image via Daniel J. Field/ Cambridge University.

In a statement, Field, who led the study, said:

The moment I first saw what was beneath the rock was the most exciting moment of my scientific career. This is one of the best-preserved fossil bird skulls of any age, from anywhere in the world. We almost had to pinch ourselves when we saw it, knowing that it was from such an important time in Earth’s history.

The ability to CT scan fossils, like we can at the Cambridge Biotomography Centre, has completely transformed how we study paleontology in the 21st century.

Juan Benito, also of Cambridge University and a co-author of the study, was with Field when the skull first appeared in the CT scan imaging. He added:

Finding the skull blew my mind. Without these cutting-edge scans, we never would have known that we were holding the oldest modern bird skull in the world.

1/ STOKED to share our new study in @nature, unveiling the oldest-known modern bird fossil! https://t.co/idIc8Xbc1x. We name the new fossil Asteriornis, but have been affectionately calling it the Wonderchicken. @EarthSciCam @christs_college pic.twitter.com/4gfrF7PiG7

Thank you, everyone! We are all very proud and excited to have the Wonderchicken paper out, though admittedly distracted by the state of the world! In case anyone would like to know more about the find, here's a blog post I've written about it: https://t.co/Zs39FfifJu pic.twitter.com/Y8s7GXVENb

The fossil bird skull, Field said, was a sort of “mash-up” of a chicken and a duck, with features seen in the taxonomic superorder Galloanserae that includes ducks and chickens. He and his team gave this new bird species the genus name Asteriornis, after the Greek Titan goddess of falling stars. Its full scientific name is Asteriornis maastrichtensis, where the species name maastrichtensis is a nod to the Maastrichtian age, the final age in the Cretaceous period.

Another study co-author, Daniel Ksepka, of the Bruce Museum in Greenwich, Connecticut, remarked:

We thought it was an appropriate name for a creature that lived just before the end-Cretaceous asteroid impact. In Greek mythology, Asteria transforms herself into a quail, and we believe Asteriornis was close to the common ancestor that today includes quails, as well as chickens and ducks. 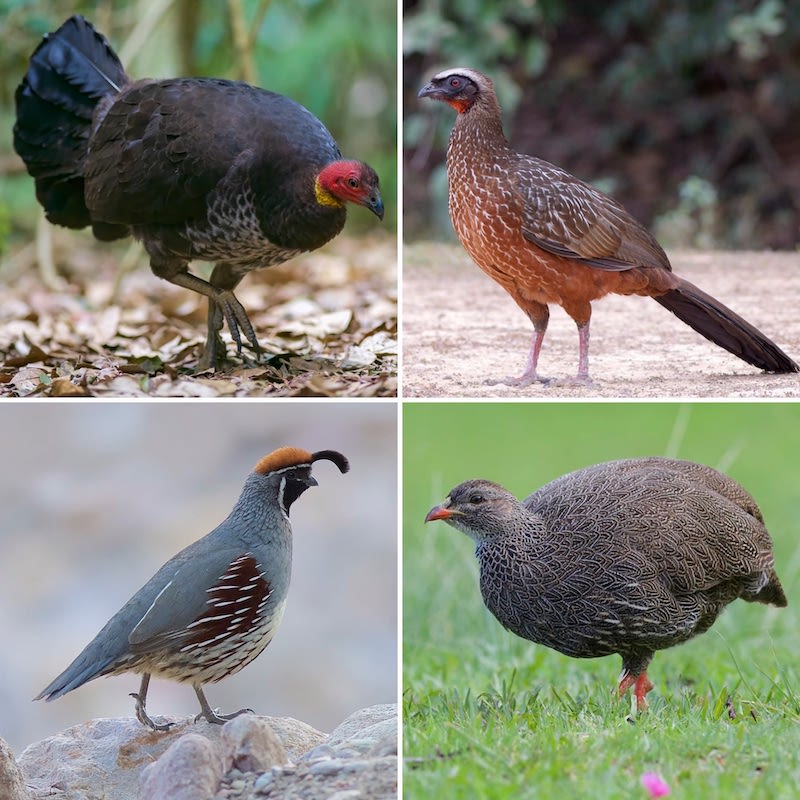 Prior to this discovery, most modern bird fossils were found in Antarctica, leading paleontologist to think that bird evolution occurred in the Southern Hemisphere. Finding the oldest known modern bird skull in Belgium has upended this theory. John Jagt, one of the paper’s co-authors at the Natuurhistorische Museum Maastricht in the Netherlands, said:

The late Cretaceous fossil record of birds from Europe is extremely sparse. The discovery of Asteriornis provides some of the first evidence that Europe was a key area in the early evolutionary history of modern birds.

It’s been well-established that birds descended from dinosaurs. But understanding why dinosaurs went extinct and birds continued to flourish is a major area of paleontological research. What was it about birds that gave them a survival edge? In a video interview, Field suggests that features such as their small size, toothless beak, a generalized diet, the ability to fly, and perhaps a ground-dwelling habit, gave them a survival advantage. He also suggested that the extinction event at the end of the Cretaceous period could have stimulated the subsequent evolution of birds, leading to the large diversity in modern bird species.

Albert Chen, a paper co-author and Ph.D. student at Cambridge, also commented on the evolutionary significance of this find:

The origins of living bird diversity are shrouded in mystery – other than knowing that modern birds arose at some point towards the end of the age of dinosaurs, we have very little fossil evidence of them until after the asteroid hit. This fossil provides our earliest direct glimpse of what modern birds were like during the initial stages of their evolutionary history.

This fossil tells us that early on, at least some modern birds were fairly small-bodied, ground-dwelling birds that lived near the seashore. Asteriornis now gives us a search image for future fossil discoveries – hopefully it ushers in a new era of fossil finds that help clarify how, when and where modern birds first evolved. 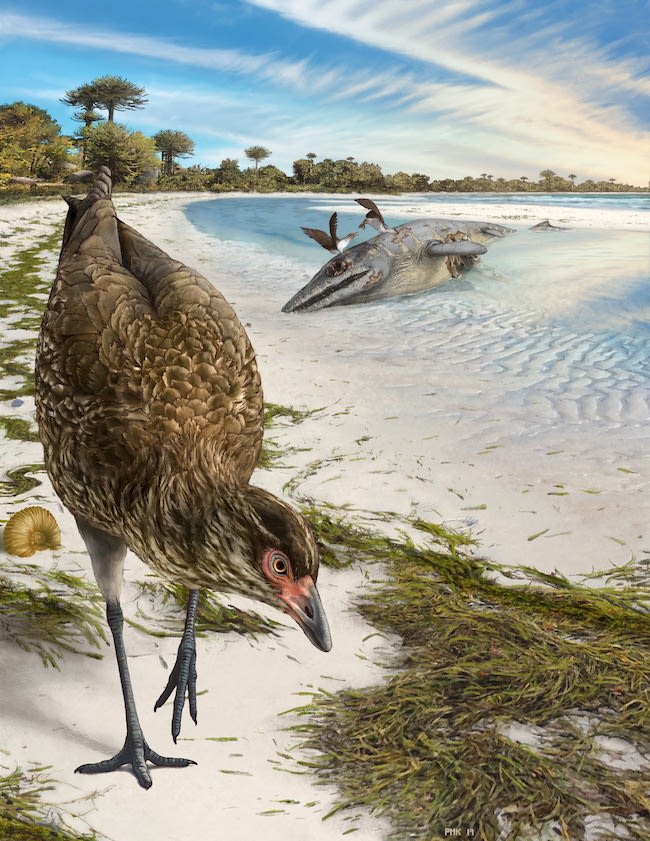 Bottom line: A fossil bird skull found in Belgium, dated to 66.7 million years old, is the oldest known modern bird fossil. Nicknamed “Wonderchicken,” it’s been described as a “mash-up” of a chicken and a duck, and could be related to the direct ancestor of modern ducks and chickens. This new fossil could help scientists understand how birds survived the mass extinction.