Why birds smash into windows

Up to 1 billion birds die each year in the U.S. due to collisions with windows. Why do birds slam into windows, and what can you do to prevent it? 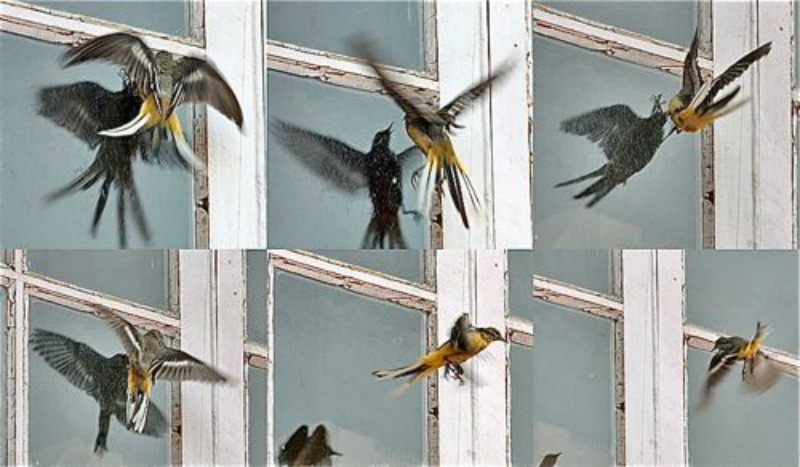 This behavior is noted all over the world. This very cool series of photos of a Grey Wagtail confronting its reflection were taken in India. Photo via Ganesh Mani Pradhan & Son.

Every spring here at EarthSky, we get questions like this one:

Birds keep crashing into our window. It’s so sad! Why do birds do this, and why can I do to prevent it?

According to the Audubon Society, up to 1 billion birds die each year in the United States due to collisions with windows. 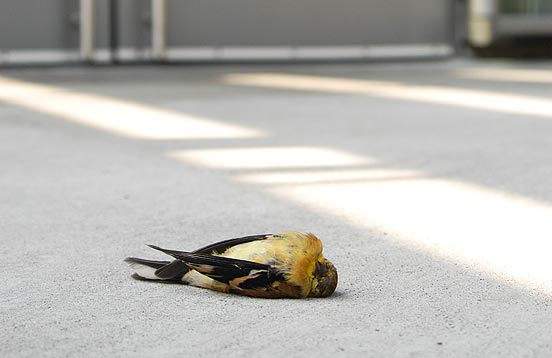 Why do birds slam into windows? For one thing, birds don’t see the world as mammals do. Sometimes birds don’t perceive windows as a barrier. Instead, reflections in glass look to them like open space, so they fly full-speed into the window. 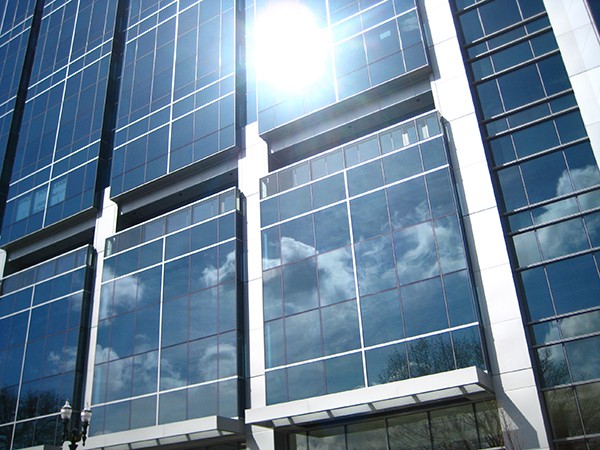 Also, what we recognize as just a reflection in a window might look like another bird to a bird.

Most birds that are active during the day have eyes on either side of their heads. This gives them a wide field of view – an advantage for detecting predators. But this advantage comes at the expense of depth perception, which depends on overlapping fields of view formed by both eyes. The lack of depth perception might contribute to birds’ mistaken belief that the reflection he sees is another bird. 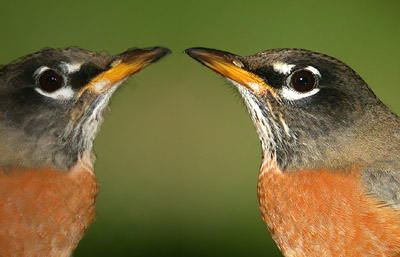 Also, birds perceive colors differently from mammals. It’s likely that birds can see colors and intensities beyond what people can see. To a bird’s eyes, the reflection in the window may be bright enough to look like a real bird.

You might notice that most of the bird-window crashes happen in spring. That’s partly because early spring is the first half of the breeding season, when male birds are defining and defending territories. Your windows might be within a bird’s selected territory. The bird sees his own reflection as an intruder, so he attacks.

Here’s another reason that the crashes might occur more in spring. That’s also the beginning of migration season. During March, April, and May, many migratory species are moving northward to set up breeding territories. Thus, there is a lot of bird movement that would increase the likelihood of window strikes. 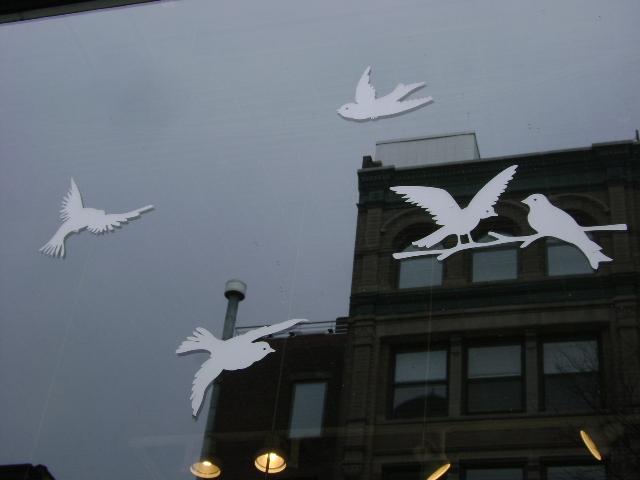 You can try cutting out the shapes of birds and placing them on your windows. Image via dailydanny.com

How can you prevent birds from smashing into your windows?

It’s not easy. Closing the shades or curtains will not work since the bird will still be able to see reflections.

Here are some things you can try:

– Cover the glass on the outside with window screening or netting at least 3 inches from the glass, taut enough to bounce birds off before they can hit the glass.

– Move your bird feeders. Place bird feeders within 3 feet of or farther than 30 feet away from windows.

– Attach decals directly to the outside of windows to break up reflections. Decals must be placed much more densely than the manufacturer suggests, ideally following the 2×4 rule.

– In the spring and fall, bright city lights confuse birds who migrate during the night by luring them into cities and obscuring their navigational aids. Once trapped in the windowed maze of the city, they may hit windows directly or circle buildings until they collapse from exhaustion. To help prevent window strikes during migration, make sure your exterior light fixtures are well-shielded and are not producing dazzling glare.

– Trees or shrubs planted very near to and in front of windows may help interrupt or cut down reflections. This can help make the window less apparent to birds.

Read more: Why Birds Hit Windows and What You Can Do to Prevent It, from the Cornell Laboratory of Ornithology