Why carbon dioxide has such outsized influence on Earth’s climate

Carbon dioxide, CO2, makes up less than one-twentieth of 1% of Earth’s atmosphere. How does this relatively scarce gas control Earth’s thermostat? 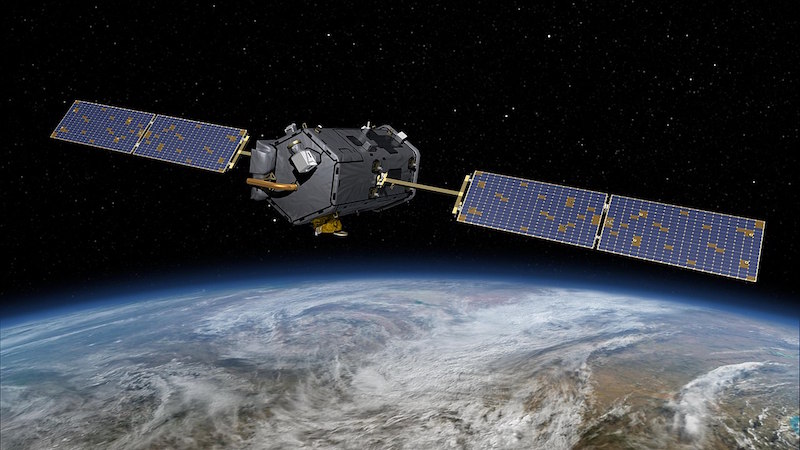 By Jason West, University of North Carolina at Chapel Hill

I am often asked how carbon dioxide can have an important effect on global climate when its concentration is so small – just 0.041% of Earth’s atmosphere. And human activities are responsible for just 32% of that amount.

I study the importance of atmospheric gases for air pollution and climate change. The key to carbon dioxide’s strong influence on climate is its ability to absorb heat emitted from our planet’s surface, keeping it from escaping out to space. 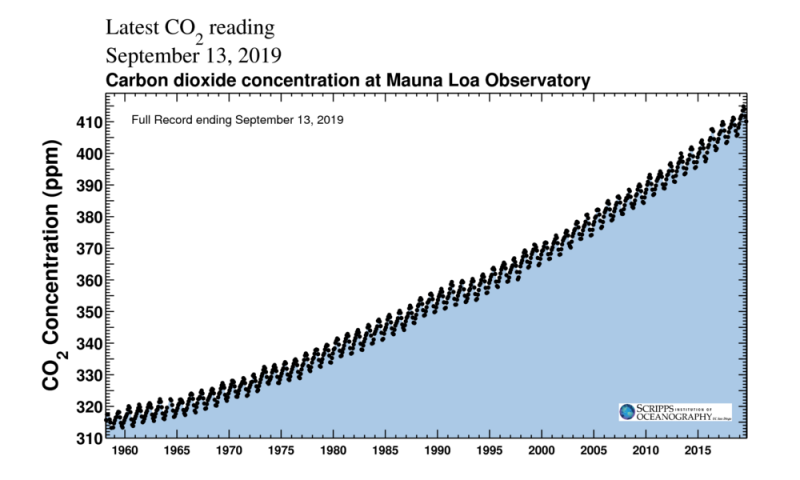 The ‘Keeling Curve,’ named for scientist Charles David Keeling, tracks the accumulation of carbon dioxide in Earth’s atmosphere, measured in parts per million. Image via Scripps Institution of Oceanography.

The scientists who first identified carbon dioxide’s importance for climate in the 1850s were also surprised by its influence. Working separately, John Tyndall in England and Eunice Foote in the United States found that carbon dioxide, water vapor and methane all absorbed heat, while more abundant gases did not.

Scientists had already calculated that the Earth was about 59 degrees Fahrenheit (33 degrees Celsius) warmer than it should be, given the amount of sunlight reaching its surface. The best explanation for that discrepancy was that the atmosphere retained heat to warm the planet.

Tyndall and Foote showed that nitrogen and oxygen, which together account for 99% of the atmosphere, had essentially no influence on Earth’s temperature because they did not absorb heat. Rather, they found that gases present in much smaller concentrations were entirely responsible for maintaining temperatures that made the Earth habitable, by trapping heat to create a natural greenhouse effect.

A blanket in the atmosphere

Earth constantly receives energy from the sun and radiates it back into space. For the planet’s temperature to remain constant, the net heat it receives from the sun must be balanced by outgoing heat that it gives off.

Since the sun is hot, it gives off energy in the form of shortwave radiation at mainly ultraviolet and visible wavelengths. Earth is much cooler, so it emits heat as infrared radiation, which has longer wavelengths.

The electromagnetic spectrum is the range of all types of EM radiation – energy that travels and spreads out as it goes. The sun is much hotter than the Earth, so it emits radiation at a higher energy level, which has a shorter wavelength. Image via NASA.

Carbon dioxide and other heat-trapping gases have molecular structures that enable them to absorb infrared radiation. The bonds between atoms in a molecule can vibrate in particular ways, like the pitch of a piano string. When the energy of a photon corresponds to the frequency of the molecule, it is absorbed and its energy transfers to the molecule.

Carbon dioxide and other heat-trapping gases have three or more atoms and frequencies that correspond to infrared radiation emitted by Earth. Oxygen and nitrogen, with just two atoms in their molecules, do not absorb infrared radiation.

Most incoming shortwave radiation from the sun passes through the atmosphere without being absorbed. But most outgoing infrared radiation is absorbed by heat-trapping gases in the atmosphere. Then they can release, or re-radiate, that heat. Some returns to Earth’s surface, keeping it warmer than it would be otherwise. 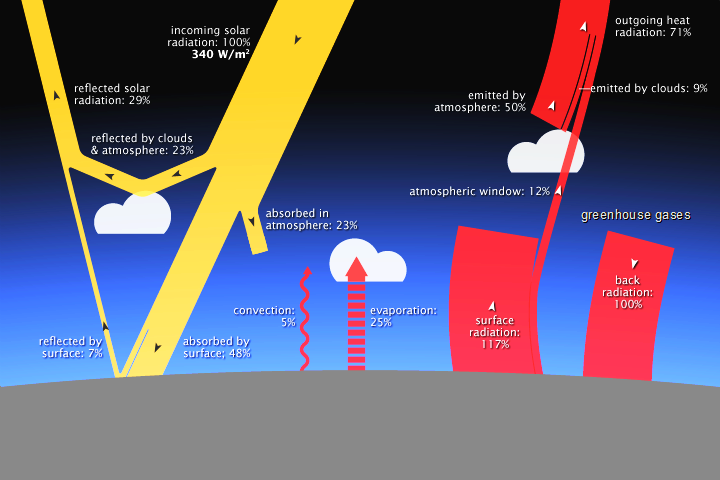 Earth receives solar energy from the sun (yellow), and returns energy back to space by reflecting some incoming light and radiating heat (red). Greenhouse gases trap some of that heat and return it to the planet’s surface. Image via NASA/Wikimedia.

During the Cold War, the absorption of infrared radiation by many different gases was studied extensively. The work was led by the U.S. Air Force, which was developing heat-seeking missiles and needed to understand how to detect heat passing through air.

This research enabled scientists to understand the climate and atmospheric composition of all planets in the solar system by observing their infrared signatures. For example, Venus is about 870 F (470 C) because its thick atmosphere is 96.5% carbon dioxide.

It also informed weather forecast and climate models, allowing them to quantify how much infrared radiation is retained in the atmosphere and returned to Earth’s surface.

People sometimes ask me why carbon dioxide is important for climate, given that water vapor absorbs more infrared radiation and the two gases absorb at several of the same wavelengths. The reason is that Earth’s upper atmosphere controls the radiation that escapes to space. The upper atmosphere is much less dense and contains much less water vapor than near the ground, which means that adding more carbon dioxide significantly influences how much infrared radiation escapes to space.

Have you ever noticed that deserts are often colder at night than forests, even if their average temperatures are the same? Without much water vapor in the atmosphere over deserts, the radiation they give off escapes readily to space. In more humid regions radiation from the surface is trapped by water vapor in the air. Similarly, cloudy nights tend to be warmer than clear nights because more water vapor is present.

The influence of carbon dioxide can be seen in past changes in climate. Ice cores from over the past million years have shown that carbon dioxide concentrations were high during warm periods – about 0.028%. During ice ages, when the Earth was roughly 7 to 13 F (4-7 C) cooler than in the 20th century, carbon dioxide made up only about 0.018% of the atmosphere.

It shouldn’t be surprising that a small amount of carbon dioxide in the atmosphere can have a big effect. We take pills that are a tiny fraction of our body mass and expect them to affect us.

Today the level of carbon dioxide is higher than at any time in human history. Scientists widely agree that Earth’s average surface temperature has already increased by about 2 F (1 C) since the 1880s, and that human-caused increases in carbon dioxide and other heat-trapping gases are extremely likely to be responsible.

Without action to control emissions, carbon dioxide might reach 0.1% of the atmosphere by 2100, more than triple the level before the Industrial Revolution. This would be a faster change than transitions in Earth’s past that had huge consequences. Without action, this little sliver of the atmosphere will cause big problems.

Bottom line: An environmental scientist explains why carbon dioxide – CO2 – has such a big effect on Earth’s atmosphere and the greenhouse effect.