Why are whales big, but not bigger?

How did whales that feed on tiny prey evolve into the largest creatures on Earth? And why don’t they get even bigger? 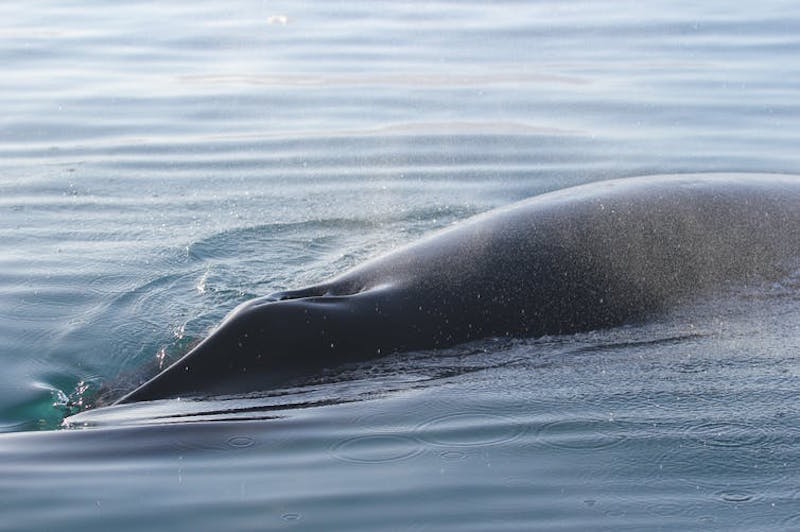 Although whales have existed on this planet for some 50 million years, they only evolved to be truly gigantic in the past five million years or so. Researchers have little idea what limits their enormous size. What is the pace of life at this scale, and what are the consequences of being so big?

As scientists who study ecology, physiology and evolution, we are interested in this question because we want to know the limits to life on Earth, and what allows these animals to live at such extremes. In a newly published study, we show that whale size is limited by the largest whales’ very efficient feeding strategies, which enable them to take in a lot of calories compared to the energy they burn while foraging. 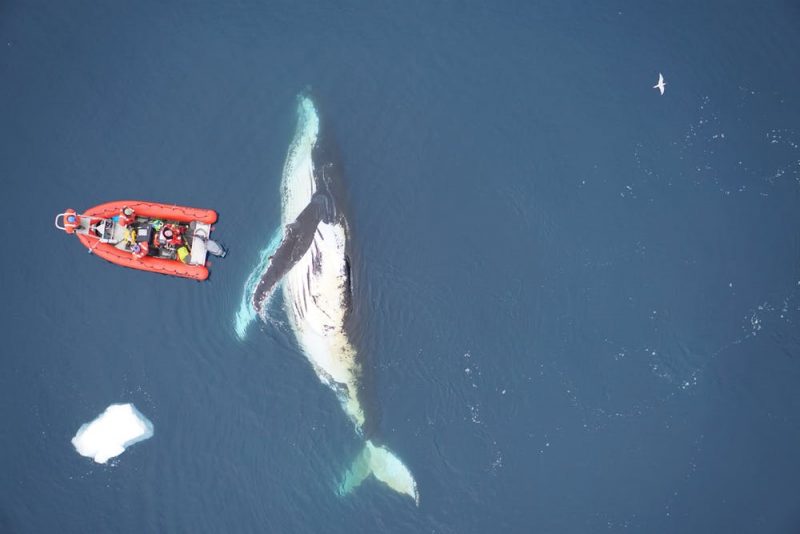 Ways to be a whale

The first whales on Earth had four limbs, looked something like large dogs and lived at least part of their lives on land. It took about 10 million years for their descendants to evolve a completely aquatic lifestyle, and roughly 35 million years longer for whales to become the giants of the sea.

Once whales became completely aquatic some 40 million years ago, the types that succeeded in the ocean were either baleen whales, which fed by straining seaweater through baleen filters in their mouths, or toothed whales that hunted their prey using echolocation.

As whales evolved along these two paths, a process called oceanic upwelling was intensifying in the waters around them. Upwelling occurs when strong winds running parallel to the coast push surface waters away from the shore, drawing up cold, nutrient-rich waters from the deep ocean. This stimulates plankton blooms.

Upwelling occurs when winds displace surface waters, which are replaced by cold, nutrient-rich water that wells up from below. Image via NOAA.

Stronger upwelling created the right conditions for baleen whale prey, such as krill and forage fish, to become concentrated in dense patches along coastlines. Whales that fed on these prey resources could forage efficiently and predictably, allowing them to grow larger. Fossil records showing that baleen whale lineages separately became gigantic all at the same time support this view.

Is there a limit to how big whales can become? We tackled this question by drawing on animal energetics – the study of how efficiently organisms ingest prey and turn the energy it contains into body mass.

Getting large is based on simple math: If a creature can gain more calories than it spends, it gets bigger. This may seem intuitive, but demonstrating it with data collected from free-living whales was a gargantuan challenge.

To get the information, our international team of scientists attached high-resolution tags with suction cups to whales so that we could track their orientation and movement. The tags recorded hundreds of data points per second, then detached for recovery after about 10 hours.

Like a Fitbit that uses movement to record behavior, our tags measured how often whales fed below the ocean’s surface, how deep they dove and how long they remained at depth. We wanted to determine each species’ energetic efficiency – the total amount of energy that it gained from foraging, relative to the energy it expended in finding and consuming prey. 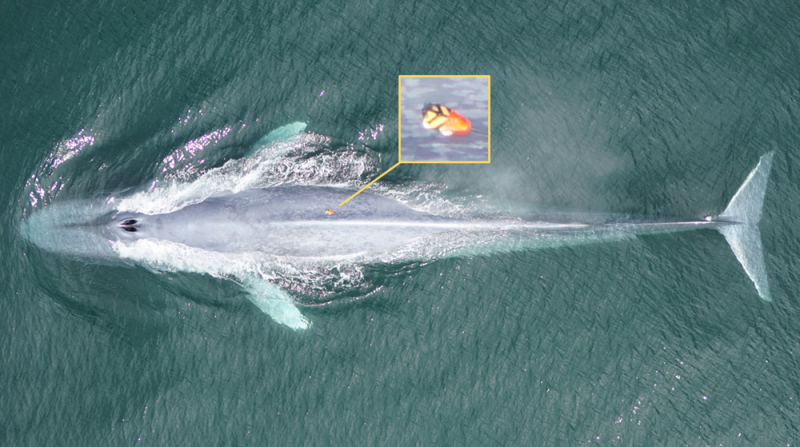 Data in this study was provided by collaborators representing six countries. Their contributions represent tens of thousands of hours of fieldwork at sea collecting data on living whales from pole to pole.

In total, this meant tagging 300 toothed and baleen whales from 11 species, ranging from five-foot-long harbor porpoises to blue whales, and recording more than 50,000 feeding events. Taken together, they showed that whale gigantism is driven by the animals’ ability to increase their net energy gain using specialized foraging mechanisms.

Our key finding was that lunge-feeding baleen whales, which engulf swarms of krill or forage fish with enormous gulps, get the most bang for their buck. As these whales increase in size, they use more energy lunging – but their gulp size increases even more dramatically. This means that the larger baleen whales get, the greater their energetic efficiency becomes. We suspect the upper limit on baleen whales’ size is probably set by the extent, density and seasonal persistence of their prey.

Large toothed whales, such as sperm whales, feed on large prey occasionally including the fabled giant squid. But there are only so many giant squid in the ocean, and they are hard to find and capture. More frequently, large toothed whales feed on medium-sized squid, which are much more abundant in the deep ocean.

Because of a lack of large enough prey, we found that toothed whales’ energetic efficiency decreases with body size – the opposite of the pattern we documented for baleen whales. Therefore, we think the ecological limits imposed by a lack of giant squid prey prevented toothed whales from evolving body sizes greater than sperm whales. 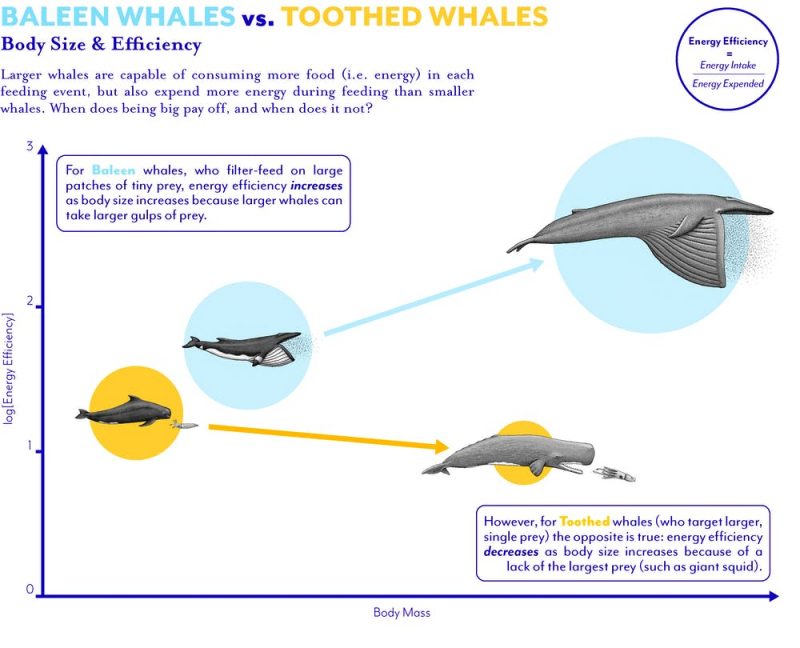 One piece of a larger puzzle

This work builds on previous research about the evolution of body size in whales. Many questions remain. For example, since whales developed gigantism relatively recently in their evolutionary history, could they evolve to be even larger in the future? It’s possible, although there may be other physiological or biomechanical constraints that limit their fitness.

For example, a recent study that measured blue whale heart rates demonstrated that heart rates were near their maximum even during routine foraging behavior, thereby suggesting a physiological limit. However, this was the first measurement and much more study is needed.

We would also like to know whether these size limits apply to other big animals at sea, such as sharks and rays, and how baleen whales’ consumption of immense quantities of prey affect ocean ecosystems. Conversely, as human actions alter the oceans, could they affect whales’ food supplies? Our research is a sobering reminder that relationships in nature have evolved over millions of years – but could be disrupted far more quickly in the Anthropocene.

Bottom line: Explanation of why whales are so big, but not even bigger.