Neutrinos – which barely exist – just ran off with another Nobel Prize 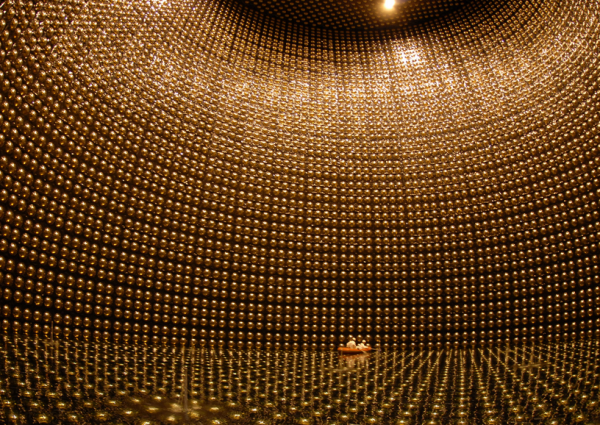 Neutrinos take patience. They’re worth it, and the announcement of the 2015 Nobel Prize in Physics recognizes that, following related prizes in 1988, 1995 and 2002. Ironically, these near-undetectable particles can reveal things that cannot be seen any other way.

I could begin by telling you that neutrinos are elementary particles, but that sounds condescending. They’re not called elementary because they’re easy to understand – they aren’t – but because they are seemingly point-like in size, and we can’t break them down into smaller constituents. There’s no such thing as half a neutrino.

The smallest things in the universe

Atoms, despite the Greek name (“cannot be cut”), are not elementary particles, meaning they can be disassembled. An atom is a diffuse cloud of electrons surrounding a tiny, dense nucleus composed of protons and neutrons, which can be broken into up and down quarks.

Particle colliders, which accelerate particles to near the speed of light and smash them together, help us discover new elementary particles. First, because of E = mc2, the energy in the collision can be converted into the mass of particles. Second, the higher the accelerator’s beam energy, the more finely we can resolve composite structures, just as we can see smaller things with X-rays than with visible light.

We haven’t been able to take apart electrons or quarks. These are elementary particles, forming the basic constituents of ordinary matter: the Lego bricks of the universe. Interestingly, there are many heavy cousins of familiar particles that exist only for fractions of a second, and thus are not part of ordinary matter. For example, for electrons these are the muon and tauon. 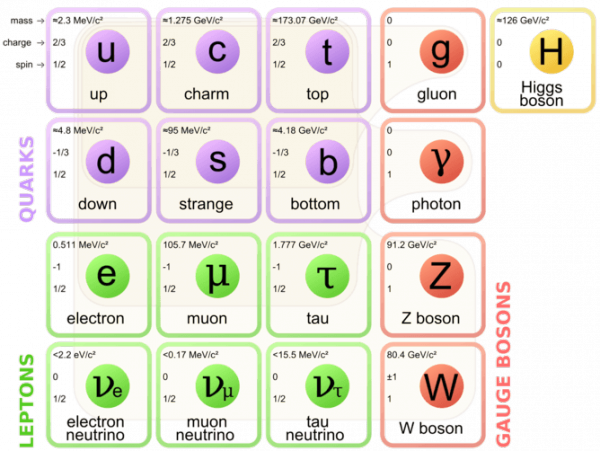 Elementary particles, of which neutrinos are one kind. Image credit: MissMJ

How is this elementary particle – the neutrino – different from all other elementary particles? It’s unique in that it’s both almost massless and almost noninteracting. Those features are different, though often conflated (don’t take advice about neutrinos from a poet, even it is John Updike).

It’s a mystery why neutrinos are almost, but not quite, massless. We do know why they’re almost noninteracting, though: They don’t feel the electromagnetic or strong forces that bind nuclei and atoms, only the aptly named weak force (and gravity, but barely, because their masses are small).

Though neutrinos are not constituents of ordinary matter, they are everywhere around us – a trillion from the sun pass through your eyes every second. There are hundreds per every cubic centimeter left over from the Big Bang. Because they so rarely interact, it’s almost impossible to observe them, and you certainly don’t feel them.

Neutrinos have other weird aspects. They come in three types, called flavors – electron, muon and tauon neutrinos, corresponding to the three charged particles they pair with – and all of these seem to be stable, unlike the heavy cousins of the electron.

Because the three flavors of neutrinos are almost identical, there is the theoretical possibility that they could change into each other, which is another unusual aspect of these particles, one that can reveal new physics. This transformation requires three things: that neutrino masses are nonzero, are different for different types, and that neutrinos of definite flavor are quantum combinations of neutrinos of definite mass (this is called “neutrino mixing”).

For decades, it was generally expected that none of these conditions would be met. Not by neutrino physicists, though – we held out hope.

In the end, nature provided, and experimentalists discovered, supported by calculations from theorists. First came decades of searching by many experiments, with important hints to encourage the chase.

Then, in 1998, the Super-Kamiokande experiment in Japan announced strong evidence that muon neutrinos produced in Earth’s atmosphere change to another type (now thought to be tauon neutrinos). The proof was seeing this happen for neutrinos that came from “below,” having traveled a long distance through Earth, but not for those from “above,” having traveled just the short distance through the atmosphere. Because the neutrino flux is (nearly) the same at different places on Earth, this allowed a “before” and “after” measurement. 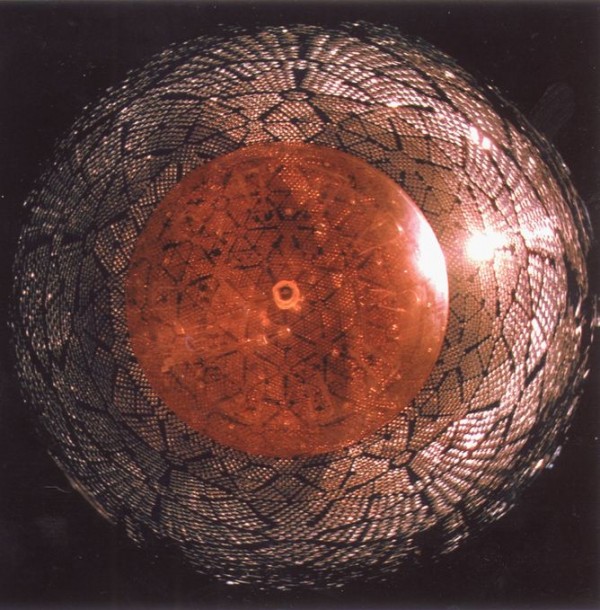 In 2001 and 2002, the Sudbury Neutrino Observatory in Canada announced strong evidence that electron neutrinos produced in the core of the sun also change flavors. This time the proof was seeing that electron flavor neutrinos that disappeared then reappeared as other types (now thought to be a mix of muon and tauon neutrinos).

Each of those experiments saw about half as many neutrinos as expected from theoretical predictions. And, perhaps fittingly, Takaaki Kajita and Arthur McDonald each got half a Nobel Prize.

In both cases, quantum-mechanical effects, which normally operate only at microscopic distances, were observed on terrestrial and astronomical distance scales.

As the front page of The New York Times said in 1998, “Mass Found in Elusive Particle; Universe May Never Be the Same.” These clear indications of neutrino flavor change, since confirmed and measured in detail in laboratory experiments, show that neutrinos have mass and that these masses are different for different types of neutrino. Interestingly, we don’t yet know what the values of the masses are, though other experiments show that they must be about a million times smaller than the mass of an electron, and perhaps smaller.

That’s the headline. The rest of the story is that the mixing between different neutrino flavors is in fact quite large. You might think it’s bad news when predictions fail – for example, that we would never be able to observe neutrino flavor change – but this kind of failure is good, because we learn something new. 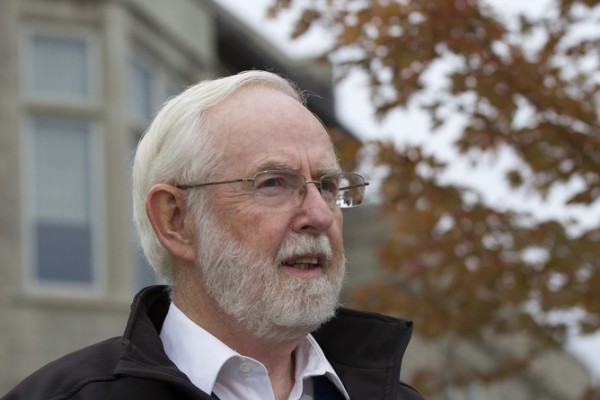 Arthur B. McDonald, professor Emeritus at Queen’s University in Canada, speaks to reporters at Queen’s University in Kingston, Ontario, October 6, 2015. McDonald and Japan’s Takaaki Kajita were co-winners of the 2015 Nobel Prize for Physics for their discovery that neutrinos, labelled nature’s most elusive particles, have mass, the award-giving body said on Tuesday. REUTERS/Lars Hagberg – RTS3AOV 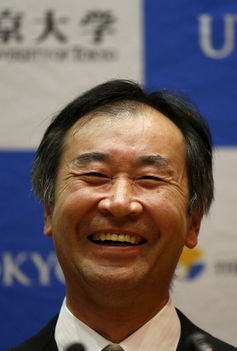 Takaaki Kajita at a news conference after the announcement he’s won the Nobel Prize for Physics. Photo credit: Kato/Reuters

I’m delighted to see this recognition for my friends Taka and Art. I wish that several key people, both experimentalists and theorists, who contributed in essential ways had been similarly recognized. It took many years to construct and operate those experiments, which themselves built on slow, difficult and largely unrewarding work going back decades, requiring the effort of hundreds of people. That includes major US participation in both Super-Kamiokande and the Sudbury Neutrino Observatory. So, congratulations to neutrinos, to Taka and Art, and to the many others who made this possible!

When I first started working on neutrinos, over 20 years ago, many people, including prominent scientists, told me I was wasting my time. Later, others urged me to work on something else, because “people who worked on neutrinos don’t get jobs.” And, even now, plenty of physicists and astronomers think we’re chasing something almost imaginary.

But we’re not. Neutrinos are real. They’re an essential part of physics, shedding light on the origin of mass, the particle-antiparticle asymmetry of the universe, and perhaps the existence of new forces that are too feeble to test with other particles. And they are an essential part of astronomy, revealing the highest-energy accelerators in the Universe, what’s inside the densest stars, and perhaps new and otherwise unseen astrophysical objects.

The author describes how the facts we learn about the universe shape our sense of meaning.

Why should you care, beyond sharing our curiosity about revealing some of the weirdest things in the universe?

The weak force that neutrinos feel is what changes protons to neutrons, powering nuclear fusion reactions in the sun and other stars, and creating the elements that make planets and life itself possible.

Neutrinos are the only component of dark matter that we understand, and figuring out the rest will help us understand the structure and evolution of the universe. If the neutrino masses had been much larger, the universe would look much different, and perhaps we wouldn’t be here to see.

Finally, if you are purely practical, neutrino physics and astrophysics is one of the most difficult jobs, requiring us to invent incredibly sensitive detectors and techniques. This knowledge has other uses; for example, using a neutrino detector, we could tell if a purported nuclear reactor is on, what its power level is and even if it is producing plutonium. This may have some real-world applications.

The past decades in neutrino physics and astronomy have been great, but some of the most exciting things are just starting to happen. The IceCube Neutrino Observatory at the South Pole is now seeing high-energy neutrinos from outside our galaxy. Super-Kamiokande has announced a plan, based on a proposal from me and Mark Vagins, to improve their sensitivity to antineutrinos compared to neutrinos. And the international community hopes to build a major new neutrino facility, in which a powerful beam of neutrinos will be sent from Fermilab in Illinois to a detector deep underground in the Homestake mine in South Dakota. Who knows what we’ll find?

And that’s what I’ve really been waiting for.

John Beacom, Professor of Physics, Professor of Astronomy, and Director of the Center for Cosmology and AstroParticle Physics (CCAPP), Ohio State University