Any drop in solar activity will be dwarfed by the impact of increased carbon dioxide in the atmosphere, says Jim Wild of Lancaster University. 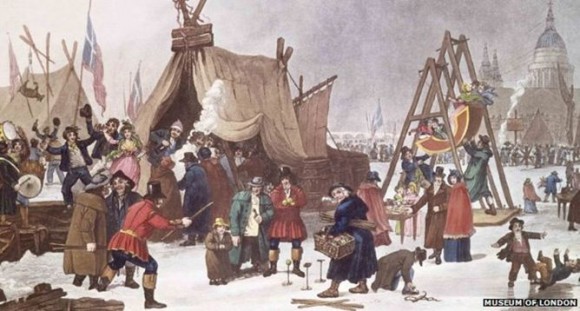 London’s ‘frost fairs’ are a thing of the past – not the future. Image credit: Museum of London

Wouldn’t it be great if scientists could make their minds up? One minute they’re telling us our planet is warming up due to human activity and we run the risk of potentially devastating environmental change. Next, they’re warning that the Earth is heading for a mini ice age in the next 15 years.

The latter headline has its roots in a recent press release from the UK’s National Astronomy Meeting that reported on a study suggesting the sun is heading towards a period of very low output. 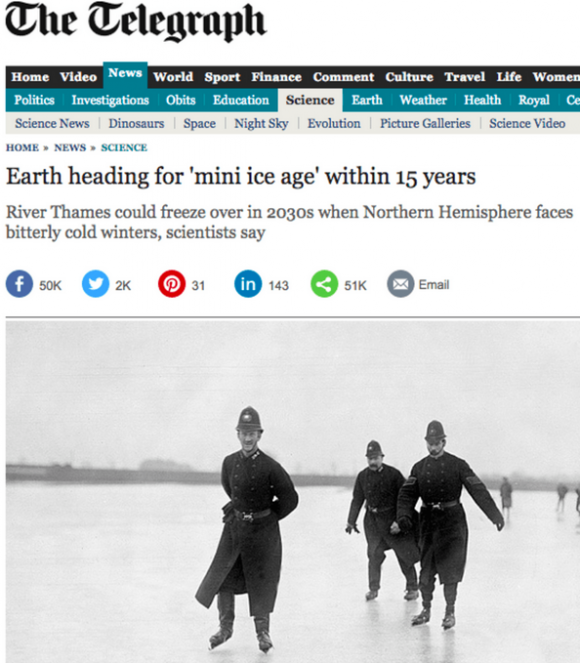 The Daily Telegraph was first to run the story. Image credit: Telegraph

Fluctuations in solar activity are not a new discovery. The 11-year variation in the number of dark sunspots on the solar surface was discovered more than 150 years ago. We now understand that these spots are symptoms of increased magnetic activity and occur during periods when explosive outbursts of energy and material such as solar flares and coronal mass ejections are more frequent.

The scientists behind the new research have modelled the rhythmic variations in solar activity over recent decades and predict that a deep low is due between 2030 and 2040. Specifically, the press release suggests that this dip in activity could mark a return to quiet solar conditions not seen for more than 350 years.

How is this astronomy story related to an impending ice age? The period of low solar activity in the 17th century, known as the Maunder minimum, lasted about 70 years and roughly coincided with the “Little Ice Age”, a era characterised by an abnormally high number of harsh winters across the UK and Europe. As almost all newspaper stories have reported, during several particularly cold winters the Thames froze, enabling frost fairs to be held on the ice.

Given the apparently strong link between low solar activity and the Little Ice Age reported in the press, it’s understandable that the prospect of a return to Maunder minimum conditions has stimulated a lot of interest.

Should we be worried?

If this link between variations in solar activity and changes in the Earth’s climate seems obvious, that’s because it is. When the amount of energy emitted by the sun changes, it has an affect on our climate.

But the real issue is just how strong this influence is compared to other factors. The total solar irradiance, a measure of the power produced by the sun in the form of electromagnetic radiation, varies by only about 0.1% over the course of the 11-year solar cycle. Climate scientists have understood this effect for some time and it is already built into the computer models that are used to try and forecast our climate.

But there are still some uncertainties. Changes in the ultraviolet portion of the Sun’s output over a solar cycle can be much greater and can deposit energy in the stratosphere – at altitudes above 10km. How this energy influences our weather and climate in the lower atmosphere is still not clear, but there is growing evidence that during periods of low solar activity, atmospheric “blocking” events are more prevalent. These blocking episodes comprise extensive and almost stationary anti-cyclones in the eastern Atlantic that can last for several weeks, hindering the flow of the jet stream and leading to colder winters in the UK and Europe.

The good news is that if the sun is heading towards Maunder minimum conditions, the likelihood of which varies greatly in different studies, then a new ice age is not inevitable. During the Little Ice Age, the atmospheric blocking effect probably played a role, but so did increased global volcanic activity that ejected gas and ash in the atmosphere, reflecting solar radiation back into space.

So we have to be careful associating the Maunder minimum with the Little Ice Age. A look at the data shows that the Little Ice Age began a long time (certainly more than a century) before the start of the Maunder minimum – and continued long after it ended. In any case, the Little Ice Age wasn’t really an ice age. Although cold winters in Europe were unusually common, it doesn’t seem to have been a global phenomenon. Research suggests it was a regional phenomenon and that the colder winters in Europe would have been accompanied by warmer ones elsewhere.

So what about global climate change? If solar activity is falling, and that has a cooling influence over the UK and Europe, isn’t that a good thing?

Unfortunately not. The overwhelming consensus among the world’s climate scientists is that the influence of solar variability on the climate is dwarfed by the impact of increased levels of carbon dioxide in the atmosphere. Most calculations suggest that a new “grand solar minimum” in activity would have a cooling effect that would temporarily offset just a few year’s worth of the warming due to the emission of carbon dioxide by humans.

We may well be heading towards a period of low solar activity, but a new mini ice age seems very unlikely at this point.

Jim Wild is Professor of Space Physics at Lancaster University.