Not all experts agree that the white whale spotted off Australia’s east coast on Tuesday was the beloved Migaloo. But most are adamant it was. 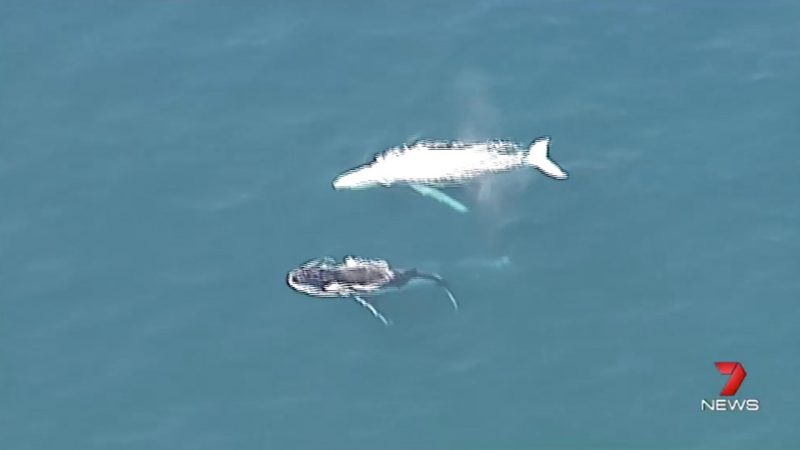 Rare white whale – believed to be the whale known as Migaloo – and a friend making their way northward along the Australian coast on July 26, 2016. Video still via @7NewsQueensland.

Whale watchers in Australia have been tracking a rare white humpback whale that appeared off the Gold Coast – a coastal city in South East Queensland on the east coast of Australia – on Tuesday afternoon (July 26, 2016). The white whale has been swimming north at a leisurely pace over the past few days. It may be one of only two or three white humpbacks left in the world, according to Phys.org. Some disagree that the whale is the famous Migaloo, which has had a loyal following in Australia since first being sighted in 1991. But it seems that most watchers are insisting it is Migaloo. Meanwhile, there’s controversy about what some are calling “harassment” from a whale watching vessel that got too close and a drone buzzing above Migaloo on Tuesday.

The whale is migrating from Antarctica northward towards warmer tropical waters to mate.

Sea World director of marine sciences Trevor Long has been widely quoted as saying the whale doesn’t appear to be Migaloo. He said the whale being spotted is smaller than Migaloo, and doesn’t have the same degree of damage and yellowing as Migaloo, and might be another animal commonly referred to as “Son of Migaloo” (not actually known to be Migaloo’s son).

Other experts, including Southern Cross University and Oceania Project researcher Wally Franklin are just as adamant that the whale being sighted off Australia’s east coast is Migaloo. Franklin told ABC.net.au that there’s no definitive evidence of there being more than one white whale. He said:

We’ve never been able to get confirmation of there being a second white whale.

We’re very confident that Migaloo is the only white whale in the Eastern Australian group.

Meanwhile, whale watchers are lined up along the coast, waiting to see the white whale pass by …

By the way, the name Migaloo is an Aboriginal word meaning “whitefella.” As early as March 2016, at @Migaloo1 on Twitter, whale watchers began anticipating the whale’s annual migration.

It is approximately 12 weeks before I head north towards warmer waters. This years song is romantic. Umm which route will I take this year?

The sightings apparently began around July 21, and heated up this week, as Migaloo moved northward along the eastern Australia coast.

He is Here! #MIgaloo sighted this morning of Boat Harbour Port Stephens heading north with a female friend. pic.twitter.com/xgcUpaPAEC

Ok what a day it was today!#Migaloo was sighted off Illuka at 1pm so if he continues to cruise at that same… https://t.co/VXkBN0gnDz

As #Migaloo approaches QLD waters, excitement build on all the Head Lands along the coast. pic.twitter.com/sJgh7trrQu

Locals spot @Migaloo1 off Ocean Shores this morning. Reports he was off Hasting Point at 1pm. Pic by Alison Reid pic.twitter.com/c6ktEP6r5y

But then some watchers thought they spotted another white whale …

Breaking News: Another white whale sighted this afternoon (5.15pm) 26th July off Caves Beach near (Newcastle)
Which one is #Migaloo

Was it @Migaloo1, his son or another mysterious humpback #whale? https://t.co/TmHzfdTJAX pic.twitter.com/91iy8FhUc6 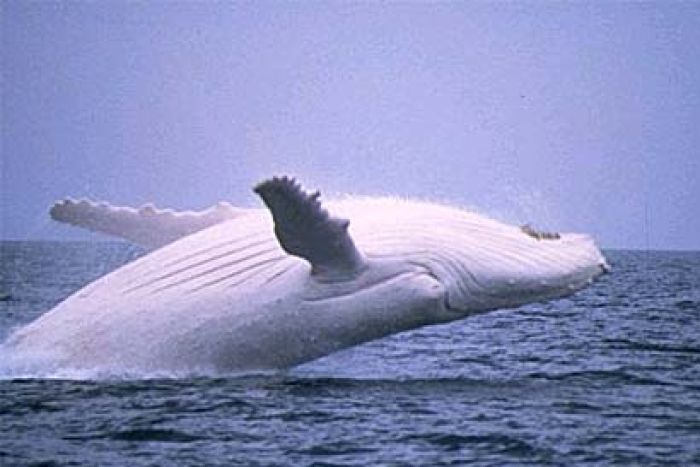 Phys.org reported that Oskar Peterson, who runs the Australian-based White Whale Research Centre, said a study by Southern Cross University in 2004. The center managed to get skin samples from the whale, had shown Migaloo was male and (now) around 30 years old. Phys.org also said:

The whale is expected to gradually make his way as far north as Cooktown in the Australian tropics before the return trip to Antarctica later in the year.

Australia’s east coast humpback population has been brought back from the brink of extinction following the halting of whaling in the early 1960s.

Bottom line: Whale watchers along the east coast of Australia are lined up to catch sight of Migaloo, a beloved and rare white whale.