A satellite view of the area of the April 16, 2013 earthquake in Iran.

A magnitude 7.8 earthquake struck a border area of southeast Iran yesterday (April 16, 2013) destroying hundreds of houses and shaking buildings as far away as India and Gulf Arab states. At least 34 people have died and 80 are injured according to a CNN report.

The quake was the largest to hit Iran in more than 50 years. It was caused by the ongoing collision of two enormous slabs of the Earth’s crust — the Arabian and Eurasian plates. The image below is a satellite view of the area where the earthquake occurred. Its epicenter was about 83 kilometers (52 miles) east of Khash, a city with a population of more than 70,000 (the blue circle on the image.) 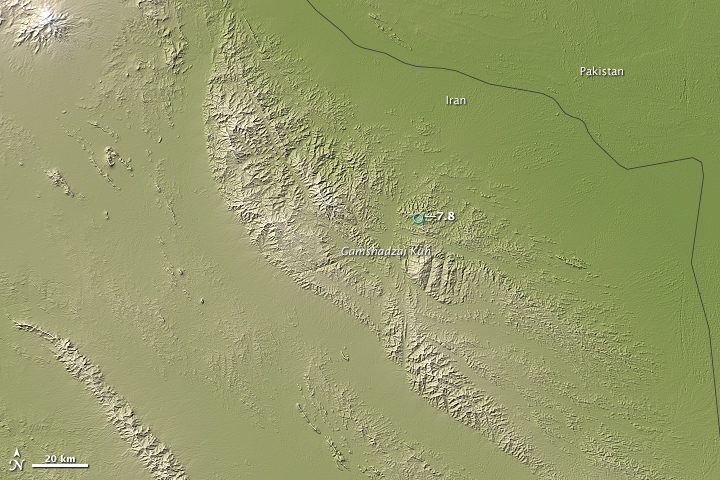 This image is based on elevation data acquired by the Advanced Spaceborne Thermal Emission and Reflection Radiometer (ASTER) on NASA’s Terra satellite. Land is shown with shades of green and beige. Higher elevations are lighter in color. Image credit: NASA

Earth’s crust is broken into giant plates that cover the surface of the planet like pieces of a puzzle. Individual plates constantly collide and grind against one another as they slide on top of a somewhat fluid layer of the Earth’s interior, causing earthquakes in the process.

The Arabian plate is sliding north-northeast at a speed of about 37 millimeters (1.5 inches) per year relative to the larger Eurasian plate. Where the two plates collide, the Arabian plate plunges beneath the larger Eurasian plate. As it descends into the mantle where it will eventually melt, earthquakes occur deep beneath the surface, along the boundary between the two plates. 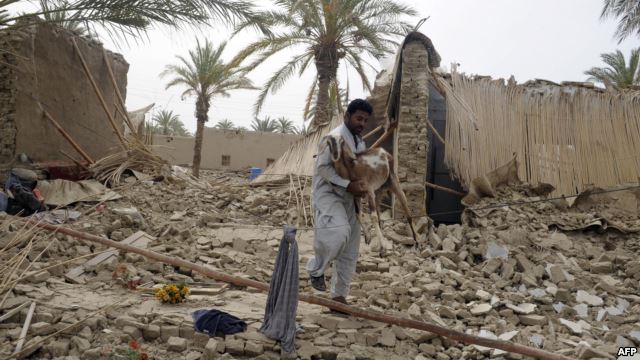 Pakistani earthquake survivor carries a goat among the rubble of collapsed mud houses in the Mashkail area of southwestern Baluchistan province on April 17, 2013. Photo via Voice of America

According to the U.S. Geological Survey, the earthquake was the result of faulting at an intermediate depth in the Arabian plate, approximately 80 kilometers (50 miles) beneath Earth’s surface. The descending Arabian plate has caused quakes as deep as 160 kilometers (100 miles) beneath the surface in this area in the past, though most have been at much shallower depths.

Bottom line: A NASA satellite image shows the area where a magnitude 7.8 earthquake struck a border area of southeast Iran on April 16, 2013.