Wildfires burned more than 10 million acres in the United States during the 2020 season. It was the worst season on record. 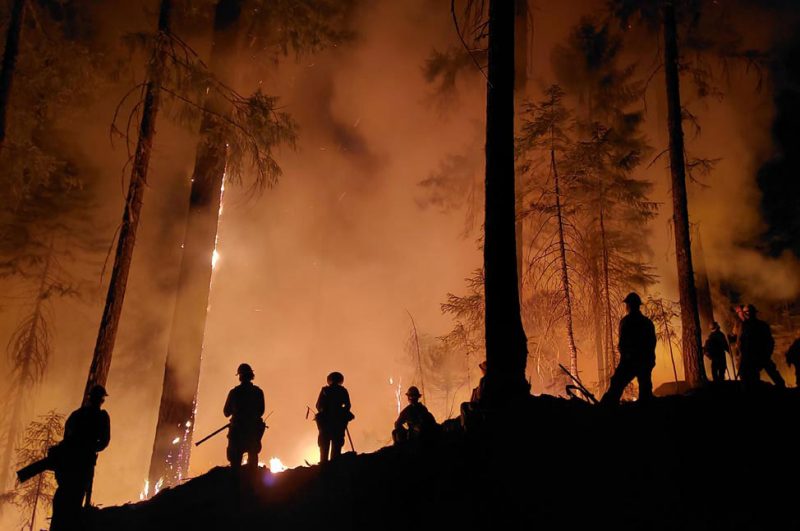 Firefighters hold the line on September 24, 2020, against the largest fire in California’s history: the 1 million-acre August Complex. Image via Tiana Huddlestun/ USFS/ InciWeb.

In the historical record dating back to the 1960s, there are only three years in which more than 10 million acres of land have burned in the United States, and those years are 2015, 2017, and 2020, all recent years. Preliminary data released by the National Interagency Fire Center on December 31, 2020, show that this year was the worst of them all. In total, nearly 10,275,000 acres of land burned, and these wildfires contributed to severe deterioration in the air quality across many cities.

EarthSky’s lunar calendar shows the moon phase for every day in 2021. Order yours before they’re gone. 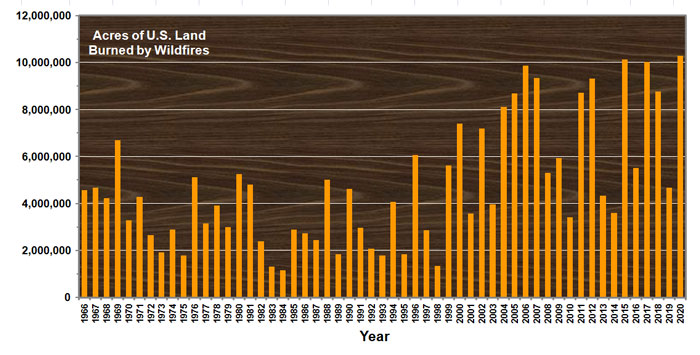 Annual amount of land burned by wildfires in the U.S., according to National Interagency Fire Center data. Data for 2020 were obtained from the December 31, 2020, situation report and may change slightly as records are reviewed over the next several months. Image via D. E. Conners.

Wildfires are ignited by both natural phenomena such as lightning strikes and human activities such as sparks from machinery and arson. Once a wildfire begins, a variety of factors determine whether that fire will peter out or spread across the land. Variables including drought, high temperatures, and high winds drive the spread of wildfires, and indeed, these variables were all at play during the 2020 wildfire season.

NOAA’s Climate.gov, an important authoritative resource for climate news, noted that expansions in drought and a bad heatwave worsened the wildfires in late summer. Later in the year, USA Today reported that high wind events contributed to the spread of wildfires throughout the fall.

One aspect of wildfires that 2020 made painfully clear is that we as a society need to start paying more attention to not only the devastating local impacts on homes and wildlife habitat, but also to the wider adverse impacts on air quality.

During the 2020 wildfire season, air quality plummeted in Colorado, California, and other western states. Wildfire smoke can have many negative health impacts. For example, particulates released by fires can worsen asthma and increase the number of cardiopulmonary hospitalizations and deaths. Even the fittest of people are forced indoors during bad air quality days.

On September 23, 2020, NPR reported that 1 in 7 Americans had already experienced at least one day of unhealthy to hazardous air quality conditions during the wildfire season. It will be interesting to see the full results for the entire year once those data have been compiled.

Climate change has contributed to the increase in wildfires and will continue to do so into the foreseeable future. Estimates indicate that approximately twice as much land burned from 1984 to 2015 as a result of climate change, according to NOAA Climate.gov.  Because these large burn years are expected to become more common, tools will be needed to help communities prepare for and cope with increasing episodes of wildfire smoke. AirNow is one such tool that should prove useful in the years ahead. Mask use may also become more commonplace.

Bottom line: The 2020 wildfire season was the worst one on record in terms of acres burned and the degradation in air quality. Droughts, heatwaves, and high winds were contributing factors.