Volcanoes on the ocean floor flare up on regular cycles – lasting from two weeks to 100,000 years. Do they help produce suddenly seesawing hot and cold periods? 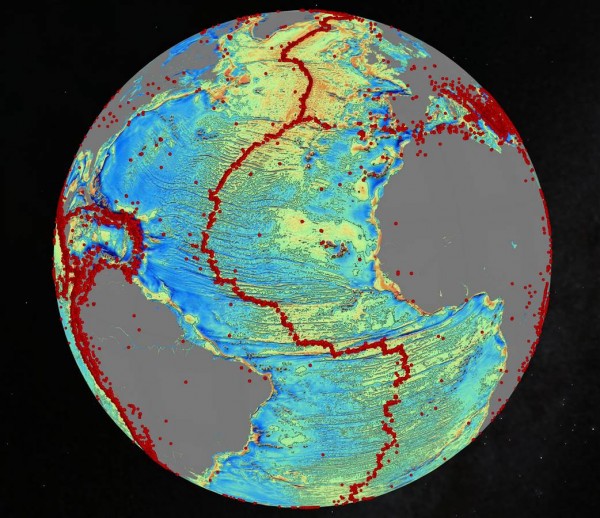 Prior research has shown that Earth’s oceans hide a volcanic wonderland.

Vast ranges of volcanoes hidden under Earth’s oceans have been presumed by scientists to be the gentle giants of the planet, oozing lava at slow, steady rates along mid-ocean ridges. A new study shows otherwise. It shows that these undersea volcanoes flare up on strikingly regular cycles, ranging from two weeks to 100,000 years. What’s more, they erupt almost exclusively during the first six months of each year. The study – published February 6, 2015 in the journal Geophysical Research Letters – suggests that these cyclic pulses from seafloor volcanoes might help trigger natural climate swings. The idea is that the volcanic cycles might be tied to short- and long-term cycles in Earth’s orbit – the so-called Milankovitch cycles – and to changing sea levels.

Scientists have already speculated that volcanic cycles on land emitting large amounts of carbon dioxide might influence climate. But up to now there was no evidence of a similar contribution from submarine volcanoes. The new findings suggest that models of Earth’s natural climate dynamics, and by extension human-influenced climate change, might have to be adjusted.

People have ignored seafloor volcanoes on the idea that their influence is small. But that’s because they are assumed to be in a steady state, which they’re not. They respond to both very large forces, and to very small ones, and that tells us that we need to look at them much more closely.

Volcanically active mid-ocean ridges crisscross Earth’s seafloors like stitching on a baseball, stretching some 37,000 miles (60,000 km). They are the growing edges of giant tectonic plates; as lavas push out, they form new areas of seafloor, which comprise some 80 percent of the planet’s crust.

Conventional wisdom holds that seafloor volcanoes erupt at a fairly constant rate, but Tolstoy finds that the ridges are actually now in a languid phase. Even at that, they produce perhaps eight times more lava annually than land volcanoes.

Due to the chemistry of their magmas, the carbon dioxide they are thought to emit is currently about the same as, or perhaps a little less than, from land volcanoes—about 88 million metric tons a year, says Tolstoy. But, she adds, were the undersea chains to stir even a little bit more, their CO2 output would shoot up.

Some scientists think volcanoes might act in concert with the well-known Milankovitch cycles – repeating changes in the shape of Earth’s solar orbit, and the tilt and direction of our world’s axis — to produce suddenly seesawing hot and cold periods. The major one is a 100,000-year cycle in which the planet’s orbit around the sun changes from more or less an annual circle into an ellipse that annually brings it closer or farther from the sun.

Recent ice ages seem to build up through most of this 100,000-year cycle; but then things suddenly warm back up near the orbit’s peak eccentricity. The causes are not clear.

Enter volcanoes. Researchers have suggested that as icecaps build on land, pressure on underlying volcanoes also builds, and eruptions are suppressed. But when warming somehow starts and the ice begins melting, pressure lets up, and eruptions surge. They belch CO2 that produces more warming, which melts more ice, which creates a self-feeding effect that tips the planet suddenly into a warm period. A 2009 paper from Harvard University says that land volcanoes worldwide indeed surged six to eight times over background levels during the most recent deglaciation, 12,000 to 7,000 years ago. The corollary would be that undersea volcanoes do the opposite: as Earth cools, sea levels may drop 100 meters (about 300 feet), because so much water gets locked into ice. This relieves pressure on submarine volcanoes, and they erupt more. At some point, could the increased CO2 from undersea eruptions start the warming that melts the ice covering volcanoes on land?

That has been a mystery, partly because undersea eruptions are almost impossible to observe. However, Tolstoy and other researchers recently have been able to closely monitor 10 submarine eruption sites using sensitive new seismic instruments. They have also produced new high-resolution maps showing outlines of past lava flows. Tolstoy analyzed some 25 years of seismic data from ridges in the Pacific, Atlantic and Arctic oceans, plus maps showing past activity in the south Pacific.

The long-term eruption data, spread over more than 700,000 years, showed that during the coldest times, when sea levels are low, undersea volcanism surges, producing visible bands of hills. When things warm up and sea levels rise to levels similar to the present, lava erupts more slowly, creating bands of lower topography. Tolstoy attributes this not only to the varying sea level, but to closely related changes in Earth’s orbit. When the orbit is more elliptical, Earth gets squeezed and unsqueezed by the sun’s gravitational pull at a rapidly varying rate as it spins daily—a process that she thinks tends to massage undersea magma upward, and help open the tectonic cracks that let it out. When the orbit is fairly (though not completely) circular, as it is now, the squeezing/unsqueezing effect is minimized, and there are fewer eruptions.

The idea that remote gravitational forces influence volcanism is mirrored by the short-term data, says Tolstoy. She says the seismic data suggest that today, undersea volcanoes pulse to life mainly during periods that come every two weeks. That is the schedule upon which combined gravity from the moon and sun cause ocean tides to reach their lowest points, thus subtly relieving pressure on volcanoes below. Seismic signals interpreted as eruptions followed fortnightly low tides at eight out of nine study sites. Furthermore, Tolstoy found that all known modern eruptions occur from January through June. January is the month when Earth is closest to the sun, July when it is farthest—a period similar to the squeezing/unsqueezing effect Tolstoy sees in longer-term cycles. She said:

If you look at the present-day eruptions, volcanoes respond even to much smaller forces than the ones that might drive climate.

The most interesting takeaway from this paper is that it provides further evidence that the solid Earth, and the air and water all operate as a single system. 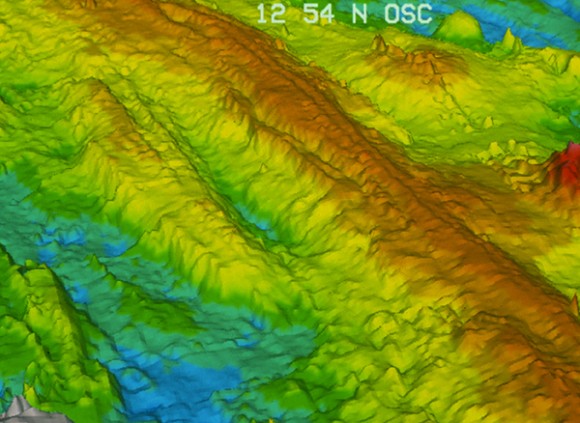 Alternating ridges and valleys formed by volcanism near the East Pacific Rise, a mid-ocean ridge in the Pacific Ocean. Such formations indicate ancient highs and lows of volcanic activity, according to the new study. Image via Haymon et al., NOAA-OE, WHOI 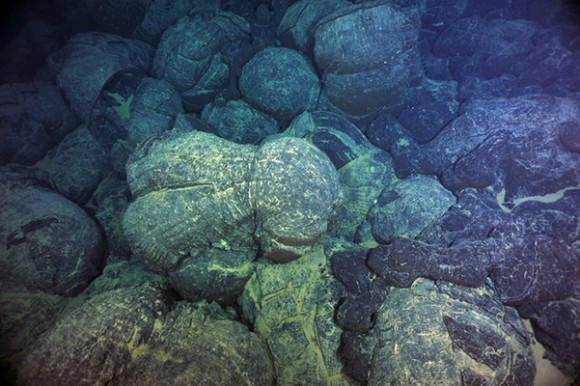 Magma from undersea eruptions congealed into forms known as pillow basalts on the Juan De Fuca Ridge, off the U.S. Pacific Northwest. The new study shows such eruptions wax and wane on regular schedules. Image via Deborah Kelley/University of Washington

Read more from the Earth Institute