The science behind Nepal earthquakes

Nepal sits on the boundary of the two massive tectonic plates that collided to build the Himalayas. Their ongoing convergence also means earthquakes. 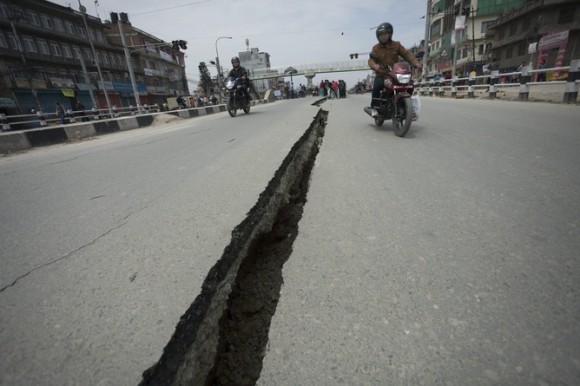 A crack in a road near Kathmandu caused by the April 25 earthquake. Photo credit: EPA/Hemanta Shrestha

The April 25, 2015 earthquake in Nepal destroyed housing in Kathmandu, damaged World Heritage sites, and triggered deadly avalanches around Mount Everest. The death toll is already reported as being in the many thousands. Given past experience, it would not surprise if it were to reach the many tens of thousands when everyone is accounted for.

Nepal is particularly prone to earthquakes. It sits on the boundary of two massive tectonic plates – the Indo-Australian and Asian plates. It is the collision of these plates that has produced the Himalaya mountains, and with them, earthquakes.

Our research in the Himalaya is beginning to shed light on these massive processes, and understand the threat they pose to local people.

The science of earthquakes

These quakes are a dramatic manifestation of the ongoing convergence between the Indo-Australian and Asian tectonic plates that has progressively built the Himalayas over the last 50 million years. 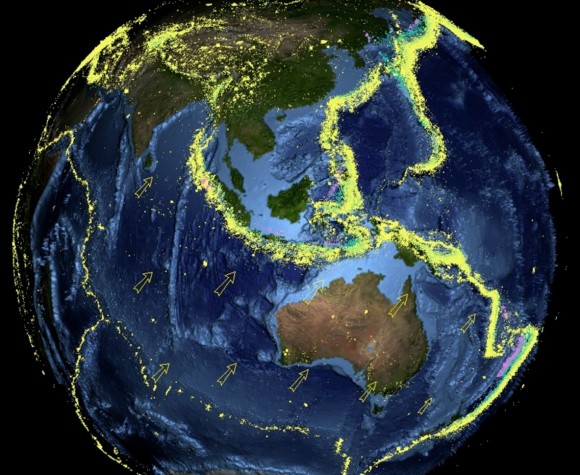 They are but one reminder of the hazards faced by the communities that live in these mountains. Other ongoing hazards include floods and monsoonal landslides, as exemplified by the Kedarnath disaster of 2013 which killed more than 5,000 people.

Earthquakes occur when strain builds up in Earth’s crust until it gives way, usually along old fault lines. In this case the strain is built by the collision or convergence of two plates.

A number of factors made this quake a recipe for catastrophe. It was shallow: an estimated 15km below the surface at the quake’s epicentre. It saw a large movement of the earth (a maximum of 3m). And the ruptured part of the fault plane extended under a densely populated area in Kathmandu.

From the preliminary analysis of the seismic records we already know that the rupture initiated in an area about 70km north west of Kathmandu, with slip on a shallow dipping fault that gets deeper as you move further north.

Over about a minute, the rupture propagated east by some 130km and south by around 60km, breaking a fault segment some 15,000 square kilometres in area, with as much as 3m slip in places.

The plates across this segment of the Himalaya are converging at a rate of about 2cm this year. This slip released the equivalent of about a century of built up strain.

While the occurrence of large earthquakes in this region is not unexpected, the seismological community still has little useful understanding of how to predict the specific details of such ruptures. While the statistical character of earthquake sequences is well understood, we are still unable to predict individual events.

Questions as to why such a large earthquake, in this specific location at this time, and not elsewhere along the Himalaya, continue to baffle the research community, and make for problematic challenge of better targeted hazard preparedness and mitigation strategies.

But with each new quake researchers are gaining valuable new insights. As exemplified by the ready availability of quality data and analysis in near real time provided by organisations such as the United States Geological Survey and Geoscience Australia, the global network of geophysical monitoring is providing an ever more detailed picture of how the earth beneath our feet is behaving.

New techniques are also helping us read the record of past earthquakes with ever greater accuracy. Our research collaboration – involving the University of Melbourne, the Jawaharlal Nehru Centre for Advanced Scientific Research and the Indian Institute of Science in India, the University of Victoria in Canada, and the Bhutan Government – is studying the earthquake geology of adjacent areas of the Himalaya in the state of Uttarakhand in India and in Bhutan.

Together we are mapping indicators of tectonic activity that link the earthquake time-scale (from seconds to decades) to the geological time-scale (hundred of thousands to millions of years).

Using new digital topography datasets, new ways of dating landscape features and by harnessing the rapidly growing power of computer simulation, we have been able to show how large historical ruptures and earthquakes correlate with segmentation of the Himalayan front reflected in its geological makeup.

This is shedding new light on so-called seismic gaps, where the absence of large historical ruptures makes for very significant concern. You can read our latest research here.

The most prominent segment of the Himalayan front not to have ruptured in a major earthquake during the last 200–500 years, the 700-km-long “central seismic gap” in Uttarakhand, is home to more than 10 million people. It is crucial to understand if it is overdue for a great earthquake.

Our work in Uttarakhand and elsewhere is revealing how the rupture lengths and magnitude of Himalayan quakes is controlled by long-lived geological structures. While little comfort to those dealing with the aftermath of Saturday’s tragedy, it is part of a growing effort from the international research community to better understand earthquakes and so help mitigate the impact of future events.

Funded as part of the Australian Indian Strategic Research Fund and DFAT aid programs, our collaborative work is a reflection of the commitment of our governments to international earthquake research.