Oldest known primate skeleton found in China in 2002. While not part of human lineage, this little creature does provide tantalizing clues to our earliest history.

In 2002, scientists in China unearthed what’s now considered to be the oldest known primate skeleton. It was a near-complete fossil of a tiny creature – a slender-limbed, long-tailed primate about the size of today’s pygmy mouse lemur. This little creature from the past has since bolstered the idea that the anthropoid group of primates — whose modern-day members include monkeys, apes and humans — were on the scene in China by at least 55 million years ago, according to a June 5, 2013 story in Nature News. 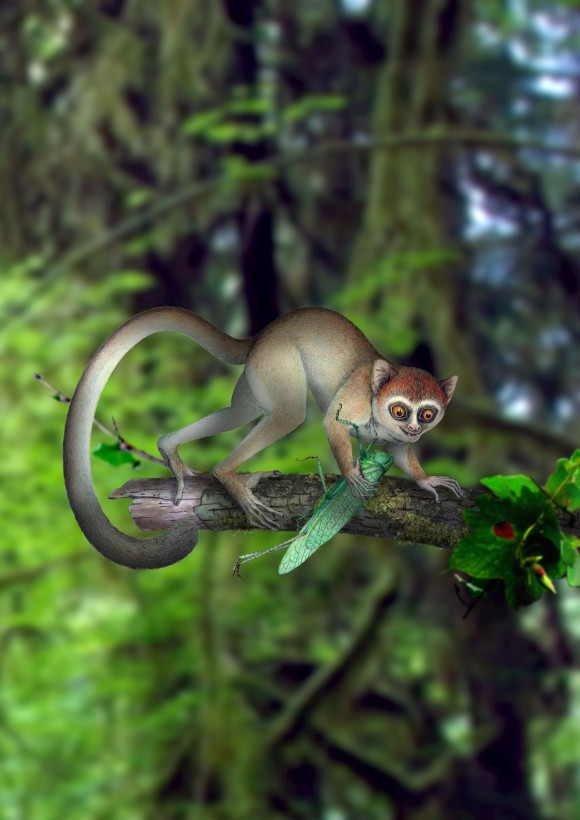 Meet the oldest known primate, as it might have looked in its natural habitat. This little creature isn’t of the same lineage as humans, but it has given scientists some insight about human evolution in China 55 million years ago. Artist’s concept via Nature.

The fossil primate – dubbed Archicebus achilles – was described by scientists this week in the journal Nature. It doesn’t belong to the same lineage as humans. Instead, it’s thought to be the earliest-discovered ancestor of small tree-dwelling primates called tarsiers. The fossil helps scientists understand, though, that – even 55 million years ago – the tarsier and anthropoid groups had split apart.

Christopher Beard, a palaeontologist at the Carnegie Museum of Natural History in Pittsburgh, Pennsylvania, led this study. His group found the primate’s remains in a layer of shale formed from sediments deposited in a lake in what is now eastern China.

The scientists say that the long hindlimbs and grasping feet of A. achilles suggest that it lived in trees, with a tail thought to be at least twice its body length helping it to maintain balance as it leapt from branch to branch. The moderate size of the primate’s eye sockets hint that it was active during the day. 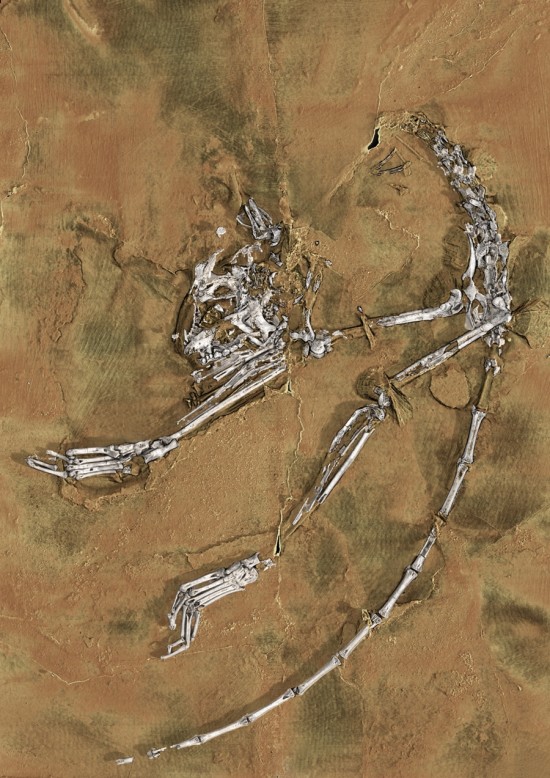 Reconstruction of the fossil of Archicebus achilles, via Nature News.

The size and shape of the primate’s teeth — particularly the sharply pointed premolars, which were well adapted for shearing prey — strongly suggest that the tiny mammal fed mostly on insects. Such prey would have been abundant, because A. achilles evolved during an era when global temperatures were exceptionally high and jungles stretched as far north as the Arctic. The scientists quipped:

It was a great time to be a primate.

Because A. achilles sits near the base of the tarsier family tree, scientists say it probably resembles the yet-to-be-discovered creatures that lie at the base of most primate groups — including the anthropoid lineage that ultimately gave rise to humans. Thus, according to Zhe-Xi Luo, a vertebrate palaeontologist at the University of Chicago, although humans and A. achilles are not of the same lineage …

If you retrace primate evolution to its beginning, [A. achilles] is what our ancestors most likely looked like.

Bottom line: The oldest known primate skeleton – of a creature known as A. achilles – was unearthed in China in 2002. Since then, scientists have been able to re-construct its appearance and some of its habits. Although this creature doesn’t belong to the same lineage as humans – being instead the earliest-discovered ancestor of small tree-dwelling primates called tarsiers – the fossil does help scientists understand that the tarsier and anthropoid groups had split apart by 55 million years ago. Because we have a common ancestor, this creature might give us some idea of what very early human ancestors looked like.

Read more about the oldest primate from Nature