An international team of scientists has set a new record for the deepest known ocean fish. They were filming in the Mariana Trench – the deepest part of the ocean.

The deepest part of the ocean is in the Mariana Trench (sometimes called the Marianas Trench), located in the western Pacific Ocean. At its deepest part, it’s just under 7 miles (6.831 miles / 10.994 km / 10,994 meters) deep. Using the UK’s deepest diving vehicle – the Hadal-Lander – an international team of marine biologists, geologists, microbiologists and geneticists recently probed this area, captured video of the world’s deepest ocean life, discovered some new species and set a new record for the world’s deepest known fish.

In December, 2014, the University of Aberdeen released information and the video above, based on these scientists’ recent 30-day journey to this cavernous part of the ocean floor.

Mysterious supergiant amphipod, filmed alive for the first time. This extremely large crustacean was first recovered by traps off New Zealand in 2012.

Deepest known fish is now a snailfish, the fragile creature to the left of center in this image, at a depth of 8,145 meters in the Mariana Trench.

Among other things, they captured the first footage of a live and very mysterious supergiant amphipod. This creature, an extremely large crustacean, was first recovered by traps off New Zealand in 2012. The new footage shows the supergiants swimming, feeding and fending off would-be predators with its large body size and protective tail. Alan Jamieson from the University of Aberdeen was part of the expedition. He said:

Knowing these creatures exist is one thing, but to watch them alive in their natural habitat and interacting with other species is truly amazing.

The video footage also shows a type of snailfish at depths of 8,145 meters – 500 meters further down than the greatest depth that fish had been observed prior to this expedition. Jamison said:

In all, the scientists completed 92 deployments of deep-sampling equipment across the entire depth range of the trench (5000 meters to 10,600 meters deep). That’s the greatest number deployed to the Mariana Trench so far, they say. 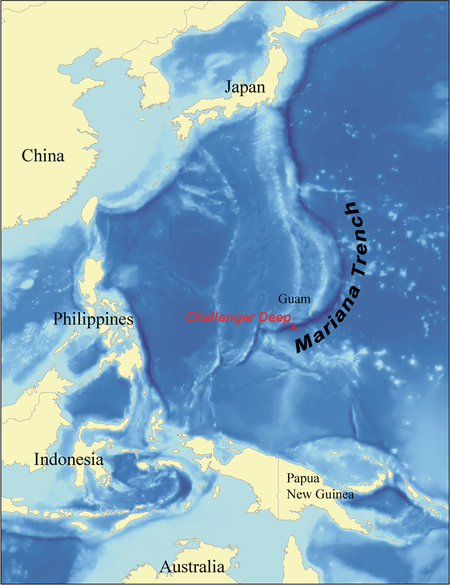 Mariana Trench in the western Pacific. The trench is some 1,580 miles long (about 2,550 km), with an average width of only 43 miles (69 km). Image via Wallace at Wikimedia Commons.

Bottom line: An international team of scientists has set a new record for the deepest known ocean fish. They were filming in the Mariana Trench – the deepest part of the ocean.

Via University of Aberdeen